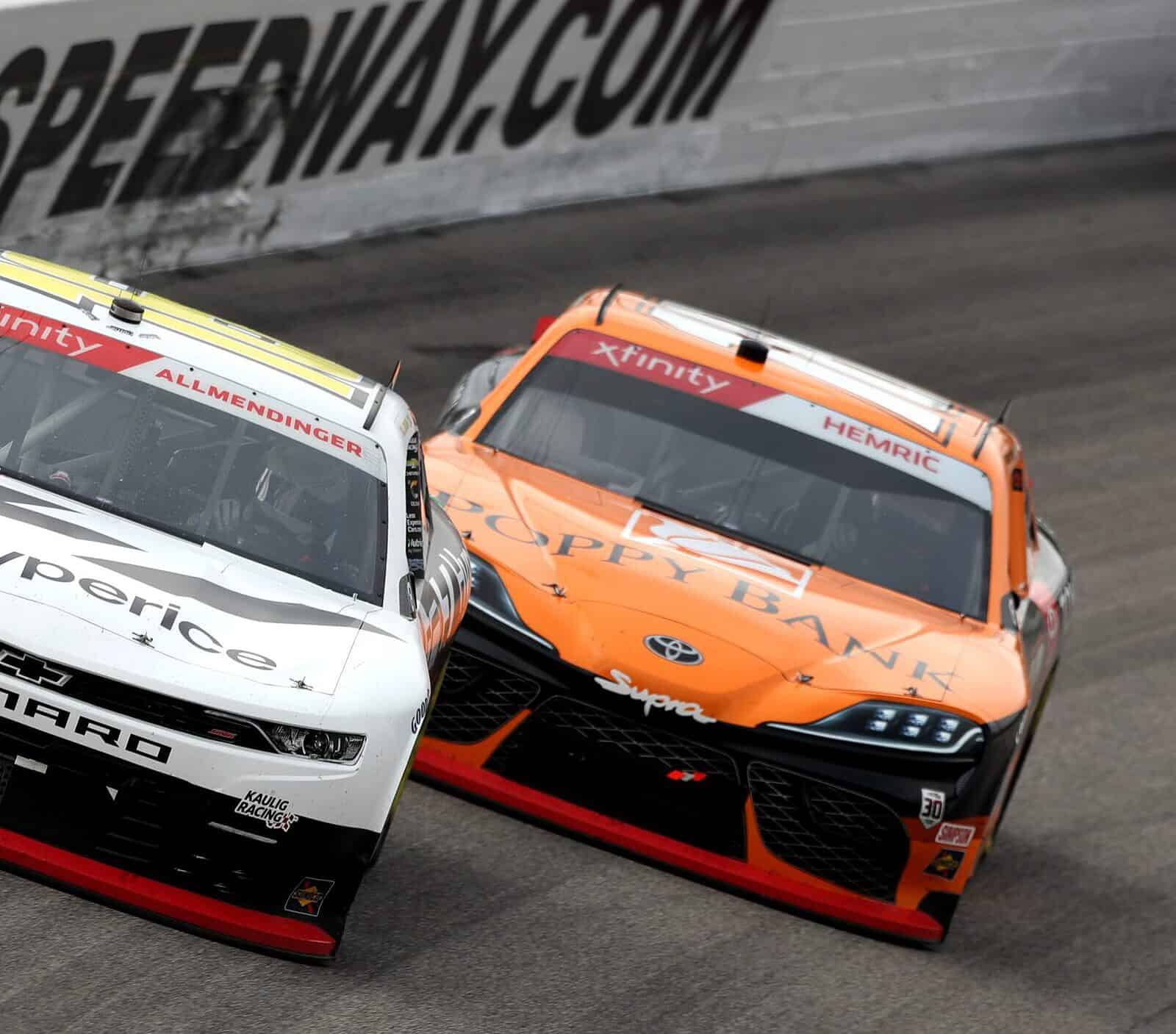 Kansas City, Kansas – No one is (technically) safe.

With two of three races in the NASCAR Xfinity Series Playoff’s Round of 8 completed, no driver has secured a spot in the Championship 4.

You can thank the “Oprah Car.”

That’s what AJ Allmendinger has dubbed Joe Gibbs Racing’s No. 54 Toyota team, which won Saturday’s (Oct. 23) race at Kansas Speedway with Ty Gibbs, giving it two wins so far in this round and 11 wins on the year with multiple drivers.

Allmendinger, who finished third Saturday to Gibbs and Austin Cindric, is “not really” surprised the Championship 4 is still up for grabs.

With Gibbs’ win, Allmendinger is tied with Cindric at the top of the playoff standings heading into next weekend’s race at Martinsville Speedway.

They’re both 47 points above the cutline.

“At the end of the day, it doesn’t matter how you get tp Phoenix [Raceway], as long as you get there,” Allmendinger said. “Today, it was a big day and a frustrating day for us, but a big day in the points to stretch it out.”

Allmendinger entered the race first in the standings, 30 points above the cutline.

“Definitely not guaranteed in, but it’s closer for sure,” Allmendinger said. “I came in today with the attitude that … if we can be anywhere near that line of plus 30 at the end of it, I was going to be happy. So to gain the points that we did was a big deal compared to how we ran.”

As the @NASCAR_Xfinity Series rolls on to Martinsville, ALL FOUR championship spots are up for grabs! #NASCARPlayoffs pic.twitter.com/zET2xopLeE

Cindric was leading with 10 laps go when he was passed by Gibbs for the lead and the eventual win.

He’s also not too surprised that no one is locked into the Championship 4.

“I think the better question is how surprised am I that the 54 has won two races in a row,” Cindric said. “I am not surprised in the slightest. Those guys have done an incredible job all year. They have won a lot of races with a lot of different drivers. Sometimes it is a challenge to try to beat that some days.”

Cindric, who has five victories this season, goes to Martinsville where he hasn’t finished in the top five in his two Xfinity starts at the half-mile track.

“I am more comfortable than anyone else can be I guess,” Cindric said. “The good thing about Martinsville is it takes a lot to hit hard enough to get you out of the race. We probably just need to finish that one and we will be in the show. That is really all that matters for us, but I would really like to try to race for a win at Martinsville.”

Behind Cindric and Allmendinger in the standings is Justin Allgaier.

The JR Motorsports driver finished ninth Saturday. He heads into the final elimination race just nine points above the cutline. Behind him is Daniel Hemric, who has only seven points separating him from elimination.

“I really expected it to not be that way,” Allgaier said of the four championship spots still up for grabs. “I think today probably hurts a little less considering the 54 won last week and they won again (at Kansas).

As for his chances of catching Cindric or Allmendinger in the points at Martinsville, Allgaier quipped, “Let’s just be honest, passing those guys would be an act of Congress.”

Allmendinger, nearing a chance to race for a championship for the first time at the age of 39, has “no nerves” ahead of the final elimination race.

“All we can do is go out there and do our best and give everything we have which is what we’re doing,” the Kaulig Racing driver said. “If it’s meant to be, it’s meant to be. I’ve never been in this position before in NASCAR. It’s all a bonus to me.”

The Good: No more intermediate track races this year!
The Bad: Definitely not one of the better races of the year.
The Ugly: What the hell was Mayer doing? Does he have a spotter?