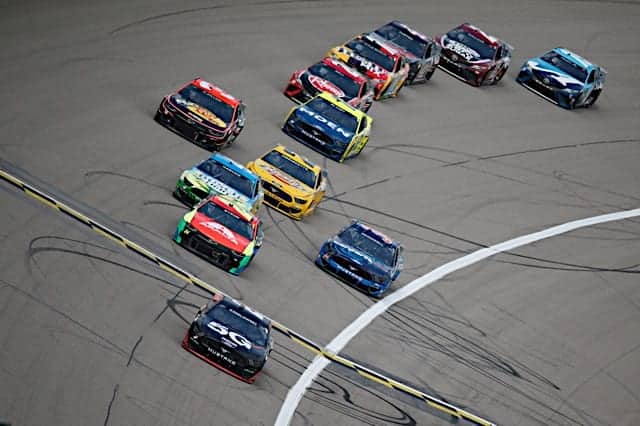 First among them is Sunday (Oct. 24) afternoon’s Hollywood Casino 400 at Kansas Speedway, where 40 drivers settle in for 267 laps on the 1.5-mile yellow brick road.

Even after last week’s likely-calm race at Texas Motor Speedway devolved into chaos in the final stage, Kyle Larson stayed ahead of the mayhem to win his eighth race of 2021 and lock up a spot in the Championship 4.

That No. 5 rolls off on pole in the Sunflower State, followed by Ryan Blaney, Brad Keselowski, Kyle Busch and Chase Elliott in the top five. Denny Hamlin, Martin Truex Jr., Joey Logano, William Byron and Christopher Bell fill out the rest of the top 10.

Every playoff car passed inspection on the first or second time through, though Ryan Newman failed twice and will start at the back of the field, as will Chase Briscoe after unapproved adjustments. Quin Houff failed three times, resulting in a pass-through penalty and the No. 00’s car chief being ejected.

Newman (31st) and Houff (35th) failed twice and will drop to the rear. Briscoe (19th) still needs to come through for second time. Everyone else is good on first or second time.

Larson is nearing 2,300 laps led on the 2021 season, where if the remaining three races run to completion will tally 9,199 laps in all. Mathematically, this means that if Larson failed to lead a single lap the rest of the way he’ll still have been out front for ~25% of all circuits completed, which essentially breaks down into the No. 5 leading flag-to-flag for nine of the 36 races.

A place Larson hasn’t won, though, is the forthcoming Kansas, where he has a best finish of third. That result came in 2018, where he finished fourth or better in both events. He did lead 132 laps in the spring race, but late-race shake-ups and bonking the wall on the restart dropped him to 19th when the checkered flag flew.

Every playoff driver but Larson and Blaney has at least one win at Kansas: Hamlin and Logano have three; Busch, Keselowski and Truex two; and Elliott has one, which came in 2018. Adding to its unpredictability, just three drivers have won the fall race there en route to a championship.

Jeff Gordon (2001) and Jimmie Johnson (2008) won Kansas on their way to titles, though the track had just one race on the schedule both years. Truex is the only driver to win the fall event in Kansas’ two-date slate before winning a title the same season.

Busch, who won the May race at Kansas, sits on the playoff cutline as the Cup Series heads back. The No. 18 is just eight points to the good with Hamlin nine and Blaney 17. Below that elimination marker sit Elliott, Keselowski, Truex and Logano, respectively sitting eight, 15, 22 and 43 ticks back.

Logano’s engine failure at Texas set him back and, barring a win at Kansas, will likely be in a must-win situation heading to Martinsville. The No. 22 did, however, win last year’s fall race in America’s heartland and has three wins total at the track.

Prior to Sunday, Ty Gibbs took the win in Saturday’s (Oct. 23) Xfinity Series race. The 19-year-old claimed his fourth series win of the year and the No. 54 prevented any NXS drivers from locking themselves into the Championship 4 for the second straight event, meaning all four slots remain up for grabs in next week’s elimination race at Martinsville Speedway. Gibbs also clinched the ARCA Menards Series championship later in the afternoon, while Nick Sanchez outraced Gibbs to score his first win in ARCA competition.

As for open-wheel racing, Formula 1 makes its visit to the U.S. at Circuit of the Americas. with its United States Grand Prix slated for 3 p.m. Sunday. Max Verstappen and Lewis Hamilton resume their title fight from the front row in Texas, respectively starting first and second, while Sergio Perez and Charles Leclerc roll off behind them.

The Cup Series also hits the track in Kansas at 3 p.m., with coverage set for NBC Sports Network.