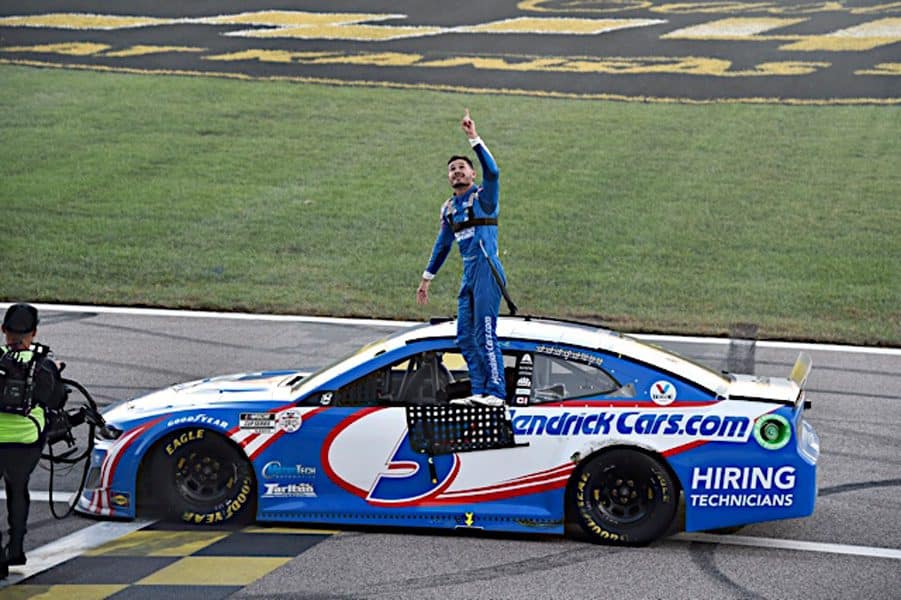 No matter what happens the rest of the season, Kyle Larson will have won at least a quarter of 2021’s races.

The No. 5 took control at Kansas Speedway on Sunday (Oct. 24) and rarely relinquished the lead, capping a day in which three of Hendrick Motorsports’ cars finished inside the top 10.

It was the ninth win for Larson on the season, though it made no difference in his prospects for Phoenix Raceway. Larson had already won last week’s event at Texas Motor Speedway, meaning there’s still only one postseason spot claimed with one race left in the Round of 8.

Larson has also now won three consecutive races heading to Martinsville Speedway. It’s the second time this season Larson has won three straight races; the last time it happened was back in 1987, when Dale Earnhardt accomplished the feat.

The victory also came 17 years to the day that 10 HMS employees and family members were killed in a 2004 plane crash, including team owner Rick Hendrick’s son Ricky. Larson’s HendrickCars.com primary scheme for 2021 is modeled after Ricky Hendrick’s GMAC scheme from that era.

“I want to dedicate this win to Rick and Linda [Hendrick],” Larson said after the race. “I didn’t get to ever meet Ricky or the other men and women who lost their lives that day, but I felt the importance of this race, no doubt. Crazy kind of how it all worked out there for me to win. I know they were all looking down, helping me out there on all the restarts and stuff and after getting in the wall. Thank you [to] Rick Hendrick — I know this means a lot to you, and I’m glad I could get it done.

“Cool to get another win, I don’t know how that happened, but our [car] was really fast. I thought we were like a third-place car, maybe. William [Byron] was really good, so hate to see the unfortunate luck there again for that team. They’ve been really, really strong. Glad we could capitalize and get another win, and hope we can go to Martinsville and get a clock.”

Larson guided the field to green, and the cars completed 10 laps before rain struck; first light rain, then harder, as wind whipped the infield. NASCAR brought the cars down pit road, and Byron’s crew chief Rudy Fugle was taken to the infield care center, the trip a result of the No. 24’s pit box canopy blowing off and a beam striking Fugle in the head. Fugle returned shortly thereafter.

The first caution for incident came out for Kyle Busch, who smacked the turn 2 wall when a tire went down.

Kyle Busch hits the wall and has a flat! #NASCARPlayoffs x NBCSN pic.twitter.com/wMWwSVlSlj

A Hendrick trio of Larson, Elliott and Byron traded the lead several times once things were back underway, while further back more issues impacted playoff drivers: Brad Keselowski hit the backstretch wall before getting additional contact from Truex, who later suffered a flat tire and was forced to pit.

Larson cruised to the stage 1 victory with HMS teammate Byron behind him, while Busch fought his way back inside the top 10 by the green-and-white checkered flag.

Of note in the opening stage as well was Parker Kligerman in Gaunt Brothers Racing’s No. 96, making his first start in nearly two full years. Kligerman started near the back but was in the top 20 by the end of the first stage, staying there for most of the rest of the race. Kligerman finished 20th.

Hendrick ran 1-2-3 during a chunk of the second stage, with Larson leading the field to green before Elliott took it away and Byron moved into second. A number of non-playoff drivers, including Tyler Reddick and Bubba Wallace, made top-10 runs early on before the pit cycles shuffled the field.

Byron won stage 2 with Elliott and Larson in tow. Kurt Busch and Harvick rounded out the top five, while Alex Bowman got all four Hendrick Chevrolets inside the top 10 with a seventh-place effort.

Keselowski was back up in the top 20 in the final stage, though a lap down, counting on a caution to help him get back on the lead lap. The No. 2 team was eventually forced to pit, though, and the caution they needed ended up flying just a few laps later for a Ryan Newman spin.

Not what Brad Keselowski wanted to see.

The caution comes out right after he pitted. #NASCARPlayoffs pic.twitter.com/yWXquNpB6d

On the restart, Dillon spun sideways, overcorrecting up into Blaney and sending the No. 12 into the wall. Blaney, running in the top 10 at the time, brought his No. 12 to pit road, as did Dillon his No. 3.

Austin Dillon gets loose and into the No. 12, and Blaney's day is done. #NASCARPlayoffs x NBCSN pic.twitter.com/tHNwKkXT60

Larson was back out front for the restart, and a green-flag run to the end of the race ensued with Harvick, Kurt Busch and Elliott in hot pursuit of the No. 5. Harvick was to Larson’s bumper before falling back while the latter pair dueled for third, with no caution flying for a Reddick flat tire.

Despite the battles behind him, Larson stayed out in front and pulled away, winning to close in on double-digit triumphs for the 2021 season and claim his third trophy in a row.

“I kind of forgot about that [damage] early,” Larson said of tagging the wall during the race. “I felt like I did an okay job of trying to hold those guys off as long as I could on older tires, but then I just got a little too impatient and the race was kind of closing down to the end, and got loose off of [turn] 2 and got in the wall.

“Thought for sure my chances of winning were done, but had a couple good restarts there that worked out for me, the [No.] 4 got to the [No.] 9’s inside at the flagstand and kind of choked that lane up, and got me clear to the lead. Had to do some blocking there and Chase was really fast at the end. Glad I didn’t have to fight him too much.”

Larson remains the only driver locked into the Championship 4 at Phoenix Raceway. Elliott and Hamlin are both more than 30 points above the cutline, while Kyle Busch and Blaney are one above and one below, respectively. Further back, Truex sits three below, Keselowski six and Logano 26.

ONE RACE LEFT in the Round of 8!@KyleLarsonRacin is the only driver locked into the Championship 4. Who do you want to see join him? #NASCARPlayoffs pic.twitter.com/sNjJO2WrvW

The Cup Series’ Round of 8 elimination race is set for next Sunday (Oct. 31) on Halloween at Martinsville Speedway. The Xfinity 500 is set for 2 p.m. ET with coverage on NBC’s flagship station.

3rd 3 wins in a row for Larson this season. Not been done since Dale sr in 87. wow, what a season.

Yep, he may make it to 10 wins. In fact, if he is going to win the championship he will most likely finish with at least 10 wins.

Very disappointed that Dillon took out Blaney that late in the race. What a waste.

Me too. Blaney has had a very good steady season. A dang shame.

I’d give Bowman a raise if he takes Denny out in the first 25 laps.

JD in NC
Reply to  Echo

Pretty awesome season for Larson. I hope NASCAR’s playoff system with the one race final doesn’t screw him out of a well deserved championship.

DoninAjax
Reply to  JD in NC

It wouldn’t be the first time a driver didn’t deserve the title.

And, by the way- Larson gas already won the “regular season” championship which is the real deal anyway. GO #5 !!