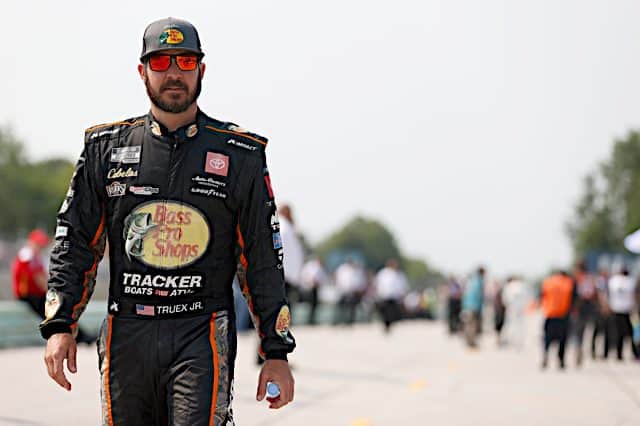 Twenty laps before the end of the first stage, the Joe Gibbs Racing driver sat in 33rd, two laps off the pace.

Like playoff drivers Brad Keselowski and Kyle Busch before him, Truex had been forced to pit for a cut tire on lap 52. The downed tire was a result of damage that occurred when Truex got into the wall trying to avoid Keselowski, who had slowed in front of him from his own contact with the wall.

But unlike Keselowski, who finished 17th, and Busch, who placed 28th, Truex made something out of his day.

“It was a long day,'” Truex said. “You never quit fighting in these things and all you can do is the best you can do. Just kept working on it and kept making adjustments and do what we could. We were able to get back on the lead lap there and take the wave around with the quick caution and battle from there.

By the end of the race, Truex had driven his No. 19 Toyota to a seventh-place finish. It was his best result since he was fourth at Las Vegas Motor Speedway, the first race of the Round of 12.

“Good comeback for sure,” Truex said. “We just we did what we always do, fight hard and never give up and now we’re in a doable position for Martinsville. … Obviously, circumstances played out in our favor today.”

Comeback aside, Truex’s result is huge for one big reason: His playoff hopes entering the final elimination race aren’t nearly as dire as they could have been.

Before Sunday’s race, Truex was seventh in the standings and 22 points behind the cutline after wrecking out of the first race of the round at Texas Motor Speedway.

Now he sits sixth in the standings, only three points behind the cutoff.

In Truex’s favor: He’s won three of the last four races at the half-mile track, including this year’s spring race. He’s led 745 laps in those four races.

In April, he led the final 16 laps on his way to beating teammate Denny Hamlin.

“I expect it to be pretty similar (to April),” Truex said. “We’ll just wait and see how it plays out. Martinsville is funny, it can change 10 or 15 degrees or the start time of the race can be a little different and you can find yourself being a little off. It’s a funny, quirky little place, but that said we have a lot of confidence and it’s been good to us over the past few seasons.”

Strategy wise, Truex hopes to keep it simple next weekend.

“Lead laps, win stages, win the race,” Truex said. “We have done that. It would be a hell of a good time to do it again.”