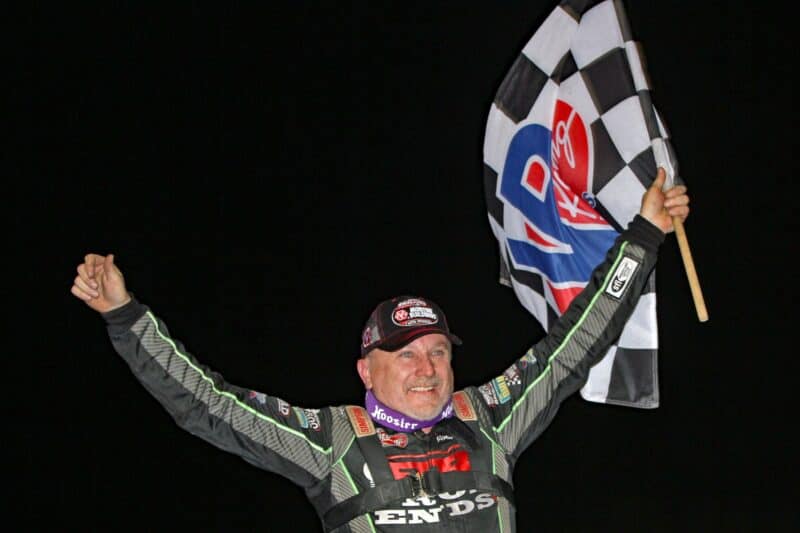 World of Outlaws late model regular Dennis Erb Jr. dominated at WhyNot Saturday night, leading the last 63 laps of the 100-lap feature to score his second consecutive Fall Classic win, making him the first consecutive-time winner in the 27-year history of the event.

Here is your winner of the $15.000 to win 27th Annual Fall Classic @ The #HouseOfHook Whynot Motorsports Park Dennis…

The feature was halted for a lengthy red flag on a lap 10 restart involving half-a-dozen cars that saw two late models stacked on top of each other in turn 3 and an infield tractor tire roll from turns 3 to 4 in the aftermath. All drivers involved were uninjured.

. @dirtvision REPLAY: @GioScelzi steals the lead from @kmr29 on a late-race restart to win the @FVPRacing Platinum Battery Showdown at @Lakeside_Spdwy! pic.twitter.com/2fiMrGkD6J

Scelzi, who had run in the top five all race long, had struggled on earlier double-file restarts as the racing surface at Lakeside remained narrow for nearly the entire program (a condition likely exacerbated by the only support class being the motorcycle-engine powered mod lites).

Points leader Brad Sweet finished sixth and extended his lead over David Gravel, who broke the track record on qualifying but finished 10th after suffering wing damage during his heat race.

For the second time in as many nights, and the fourth time in a matter of weeks, the nation’s No. 1 late model driver Brandon Overton came up short in his home state to a fellow Georgian. This time, it was Senoia’s Ashton Winger sweeping the SAS events at Senoia; on Saturday, Winger used an early exchange in lapped traffic to take the lead from Overton, a lead he’d never relinquish.

Winger’s victories on Friday and Saturday were the first two in his new No. 89 ride, which he took over this fall with the blessing of former driver GR Smith. World of Outlaws late model regular Ricky Weiss came home third.

Centerville, Pa.’s Max Blair scored what he described in victory lane as the biggest win of his career Saturday evening, taking the lead from polesitter Jeff Rine on lap 22 and driving away to the $25,000 Keystone Cup victory. The 60-lap feature went caution free.

Though Blair’s win went uncontested up front, with his No. 111 car triumphing by over a straightaway and lapping cars into the top 10, the win didn’t come without controversy. Despite being forced to a backup car after issues in the dash race, Blair was allowed to maintain his sixth-place starting position for the feature event (more on that later).

Owens was dominant out front and kept Ferguson at bay in the closing laps despite encountering lapped cars in several inopportune spots in the last five laps. Having said that, Owens was declared the race winner despite the Flo Racing broadcast seeming to indicate that the yellow flag had flown before he took the checkers on the final lap (the No. 66 of Jake Knowles had stopped in turn 4).

Matt Sheppard made Orange County Fair Speedway his personal playground on Friday, winning the $5,000 champions’ race, then following that up with a dominant Short Track Super Series victory in the $5,500-to-win Hard Clay Finale feature. Of note, Sheppard won the champion’s race after prevailing in an intense 10-lap duel with none other than native New Yorker and current Lucas Oil Late Model Dirt Series champion Tim McCreadie.

Josh Rice closed out the Florence Speedway season with yet another win at the track, claiming the $5,000 Fall 50 on Saturday. That he did it besting DIRTcar Summer Nationals champion Bobby Pierce is what made this win stand out.

Josh Rice gets it done in front of the home crowd picking up the $5,000 Fall 50 at Florence Speedway over Bobby Pierce and Scott James pic.twitter.com/nAgwJnz4lI

I’m not sure there’s a super late model driver in America whose stock has spiked more this summer/fall than Winger. After surprising many with a strong showing during the Hell Tour, Winger taking his new GR Smith ride and besting Brandon Overton in it is a big freaking deal. Will be very interesting to see what his 2022 schedule looks like.

There were so many five-figure payday races on the docket this weekend that this writer couldn’t actually watch them all. Shoutouts go to Tennessee’s Cory Hedgecock for winning the $15,000 Iron-Man Late Model Series race at I-75 Raceway on Saturday, as well as to NASCAR Truck Series regular Stewart Friesen for winning the Eastern States Weekend 100 small-modified feature at Orange County, and the $20,000 check that comes along with it.

The weekend was a tale of two Scelzis. While Giovanni scored his first WoO win of the season on Friday night at Lakeside…

… brother Dominic found himself disqualified from the Trophy Cup in Tulare, Calif.

In a shocking twist of events Dominic Scelzi is loaded up after being DQ’d for the night after an incident with Devon Borden in the pits. pic.twitter.com/ebH466S0Xz

All-Tech Raceway wasn’t kind to a number of big name Floridians in Saturday’s Powell Family Memorial race; polesitter Clay Harris had to give up a top-1o running spot after bringing out the yellow inside of 20 to go, while Joseph Joiner, still fresh off his $50,000 crate late model win at the Super Bee 100, had his engine grenade while running in the top 10.

There was plenty of competition for the roughest night at Lakeside on Friday. Lynton Jeffrey flipped his car during hot laps.

? Lynton Jeffrey goes for a ride during hot laps at tonight's FVP Platinum Battery Showdown her at Lakeside Speedway.

Jason Sides blew a tire while running in a transfer spot with two laps to go in the last-chance qualifier and missed the race. And then Aaron Reutzel, who finished fourth in his best WoO finish since losing his Roth Motorsports ride for a cheating scandal, got absolutely blasted by winner Giovanni Scelzi in victory lane for perceived dirty driving. It’s hard to give a hard-knock award to a driver that finishes top five, but it remains to be seen if Reutzel has any friends left in sprint car racing.

Griffin, Ga.’s Cory Greene ended up on his roof during Hot Shot competition at Senoia after breaking down on the backstretch and getting rear-ended at speed.

Let’s talk about Max Blair winning the Keystone Cup in a backup car without having to go to the rear of the field. The driver to his credit explained the track’s decision to let him keep his sixth-place starting position in post-race comments.

He explains why he kept his sixth-place starting spot after going to a backup.

That’s a pretty thin explanation, and that’s not Blair’s to own. I’m not sure I’d go as far as what 13th-place finisher Bryan Bernheisel’s crew chief tweeted after the race, but I can certainly understand being frustrated/upset about a driver starting a backup car with no penalty.

My opinion @JeffRine2J got robbed

The crowd at Lakeside Speedway on Friday for an Outlaws show with a very minor-league support class and no NASCAR names in the field was really impressive. I was going to say the same for the facility, but after listening to the track PA all but screaming to the crowd that an illegally parked Toyota Highlander had somehow blocked the entire facility from being able to leave, I have to retract that thought. One-exit parking lots are as unacceptable as one-groove racetracks.

Saturday’s Keystone Cup was the first race I ever streamed on longtime dirt broadcaster The Cushion, and I can’t say was enamored with the experience. Missing a good chunk of the program prior to the super late model feature due to what the site deemed “technical difficulties,” watching preliminary laps from a single backstretch camera and sitting through a caution-free 60-lap feature with no timing and scoring, as well as limited updates from the PA being streamed through, made keeping up with any driver not named Max Blair a very difficult exercise. To describe my experience in one word… dated.

How is it that your streaming service has not improved one iota in all the years you’ve been doing this?

What didn’t feel dated Saturday at the Bedford Fairgrounds Speedway was the crowd, which audibly could be heard taking part in racing’s meme of the week, bellowing “Let’s Go Brandon” as Max Blair celebrated in victory lane. I can’t help but wonder if NBC had behaved like a journalistic entity, acknowledged the error in their victory interview reporting from last Saturday and issued a public retraction, NASCAR’s latest display of lunacy at Talladega wouldn’t be filtering down to seemingly every racetrack in America. Of course, given NBC’s conduct in recent years, be it selective reporting or ignoring blatant conflicts of interest, go figure that this story is now an unstoppable wildfire.

Friday night’s Ultimate Heart of America late model race at Mountain Motorsports Park was an unmitigated cluster of a race, topped perhaps by a red-flag incident early in the event that saw Warrior house car driver Ryan King get hit head-on after spinning in turn 2. Despite the track PA announcer immediately describing the track as being under red flag conditions and rescue crews dispersing to the scene, with driver Oscar McCown on his knees on the racing surface after emerging from his car, most of the field proceeded to drive through the accident scene at caution speed before actually coming to a stop. As bad as this race was, the track’s officiating truly was worse.

We had intentions of running the track in 2022 and thought we had an agreement to do so. We have received news that the…

Henry Fonda’s Admiral Nimitz in the 1976 movie Midway stated “we can’t trade the Japanese carrier for carrier.” Sadly, that’s what the roster of active dirt tracks seems to feel like in this day and age.

4 – number of starts it took to score a lap in Friday’s Ultimate late model feature at MMP.

13.169 – new track record for the World of Outlaws at Lakeside Friday, set by David Gravel.

Where it Rated (on a scale of one to six cans with one a stinker and a six-pack an instant classic): The midweek gets three pulls of whatever the pink moonshine the race winners at All-Tech were provided. It was a thrill to see so many five-figure late model shows over the weekend, but seemingly all of them were dominated up front.

Up Next: The midweek will have events every day, with five-figure paydays up for grabs for modifieds at both Orange County Fair Speedway and Vado Speedway Park on Sunday, and Millbridge Speedway hosting midget and micro races Monday through Wednesday. Sunday coverage is available on pay-per-view, with DirtVision covering Millbridge’s events.