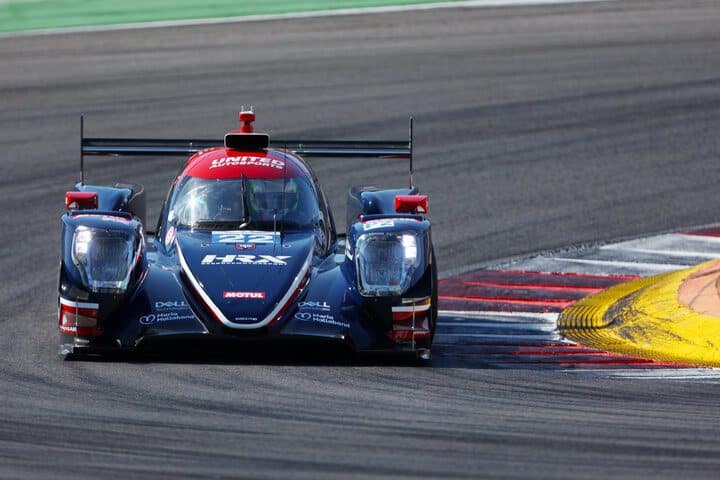 “With the [early] red flag, the strategy went all over the place,” Hanson stated after the race.  “[There were teams] with way more aggressive tire strategies than we had, but the car all weekend [was excellent].  Just goes to show if things went our way this year, what might have been, honestly.”

COOL Racing’s Charles Milesi started from pole in his ORECA 07-Gibson with Algarve Pro Racing’s Richard Bradley giving chase.  The two were not far apart in the early laps, but Milesi was able to hold off any challenges.

The scariest moment of the race came a little under a half-hour into the race when Duqueine Competition’s Memo Rojas lost his left rear wheel exiting the final turn, likely due to earlier contact.  This sent him into a series of 360 spins.  Everyone was able to avoid hitting Rojas, but 1 AIM Villorba Corse’s Andreas Laskaratos misjudged his move.  That mistake sent Laskaratos hard into the barriers protecting the blunt end of the pit wall.  Both drivers walked away from the crash, but were done for the day.  Laskaratos explained what he saw below.

?️ "It just caught me by surprise. I feel like it's my fault."@a_laskaratos reacts following his scary crash minutes ago.#ELMS #4HPortimao pic.twitter.com/vp7pKKJT9R

The crash resulted in a 30-minute red flag for repairs.  Once the race resumed, Milesi continued to lead until the first round of stops.  Everyone made their first driver change of the day.  A very quick in-lap from Hanson (including the fastest first sector of the entire race) and quicker stop from United Autosports allowed Aberdein to take the overall lead with teammate Manuel Maldonado in tow.

The pit strategy in the middle of the race saw Team WRT get up front with Ye at the wheel, but United Autosports reassumed control with Gamble at the wheel with a little over an hour to go.  At that point, everyone still had a stop to make.  Gamble made his pit stop for fuel with 20 minutes to go.  Gamble did not give up the advantage with the stop.  From there, he held on to take the victory.

Aberdein, Gamble and Hanson’s margin of victory was 21.748 seconds over the Team WRT entry.  Algarve Pro Racing’s Bradley, Sophia Floersch and Ferdinand Habsburg were third.  Floersch’s third-place finish makes her the first woman to finish on the overall podium in the history of the European Le Mans Series.

In addition to the race victories and championships, automatic entries to the 2022 24 Hours of Le Mans were also on the line.  By virtue of earning the title, Team WRT claimed an automatic entry.  It gives them two for the event as the team won the LMP2 class at Le Mans earlier this year.  United Autosports’ No. 22 moved up to second in points by virtue of their victory, allowing them to claim the second automatic entry.  It would likely give United Autosports two cars in next year’s 24 Hours of Le Mans because the team has started all five FIA World Endurance Championship races to this point in the season.  Anyone that is full-time in the WEC gets an automatic entry to Le Mans.

In LMP3, COOL Racing’s Matt Bell, Niklas Kruetten and Nicolas Maulini entered Sunday’s race with a five-point lead in the championship over DKR Engineering’s Laurents Hoerr.  The team had to run well on Sunday and keep out of trouble.  Unfortunately, the COOL squad found trouble.  At halfway, Maulini cut his left front tire and had to limp his Ligier JS P320-Nissan back to the pits.  After getting the tires changed, teammate Kruetten had trouble getting the car restarted.  This nightmare dropped the team nearly to the rear of the class and eliminated any chance at snagging the championship.

Aside from a short stretch where Sainteloc Racing led during a round of pit stops, it was Hoerr and de Barbuat that dominated the proceedings in their Duqueine M30-D08-Nissan.  Hoerr and de Barbuat easily held on to take the lead.  Hoerr won the championship by himself since de Barbuat has only driven for the team in three of the six races in 2021.  Hoerr’s championship also means that DKR Engineering has earned an automatic invitation to the 24 Hours of Le Mans in the LMP2 class.

The GTE class saw TF Sport’s John Hartshorne lead from pole in his Aston Martin, but his advantage was very short-lived.  Iron Lynx’s Rino Mastronardi took the lead away on the first lap and pulled away from the rest of the class.  While this was not the pass for the victory on the first lap of a four-hour race, it might as well have been.  The No. 80 Ferrari 488 GTE spent the vast majority of the race on top of the class.

Iron Lynx’s primary competition was Proton Competition’s N0. 93 Porsche 911 RSR-19 of Michael Fassbender, Felipe Laser and Richard Lietz.  Fassbender had one of his best drives in the Porsche, turning in some decent lap times before handing over to Laser.

In the final hour of the race, Lietz was within six seconds of Miguel Molina in the Ferrari.  Both drivers are factory racers and raced like it.  Lietz did everything that he possibly could to try to close the gap, even drawing the ire of race control for violation of track limits, but he could only keep pace for a while.  Molina was able to hold on take the third win of 2021 for himself, Mastronardi and Matteo Cressoni.  The performance was good enough to give them the championship and the automatic entry into the 24 Hours of Le Mans in the GTE-Am class.

The margin of victory was 16.984 seconds over Fassbender, Laser and Lietz.  The “Iron Dames” entry from Iron Lynx shared by Sarah Bovy, Rahel Frey and Michelle Gatting were third, followed by the Ferrari of Spirit of Race’s Duncan Cameron, Matt Griffin and David Perel.  The second Proton Competition Porsche for Gianmaria Bruni, Cooper MacNeil and Christian Ried were fifth.  Spirit of Race’s fourth-place finish locked down second in GTE points, giving them the second GTE-Am 2022 Le Mans invitation.