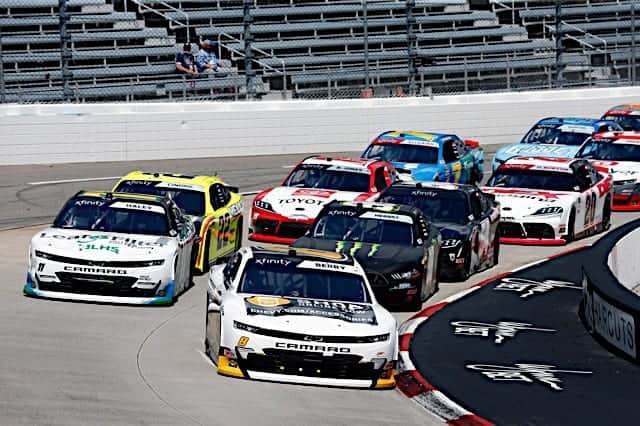 The NASCAR Xfinity Series playoffs dominated by non-playoff drivers shifts to the historic Martinsville Speedway. Xfinity playoff drivers head into the half-mile track with one last shot to punch their ticket to the Championship 4.

Forty-one cars are entered for 40 spots. As a result of lack of points, the No. 13 MBM Motorsports entry that would have been driven by Timmy Hill will miss the race.

Ty Gibbs will look to win his second race in a row in the No. 54 of Joe Gibbs Racing.

JJ Yeley will pilot the No. 17 Alcova Mortgage Toyota for SS Green Light Racing. It will be Yeley’s 15th start of the season.

In her first appearance since Road America in July, Natalie Decker returns to the No. 23 The Manson Brothers Chevrolet for Our Motorsports.

Colin Garrett also returns to the series in his first start since Darlington Raceway in September. Garrett once again teams up with Sam Hunt Racing in the No. 26 Veterans Grow America Toyota.

Josh Berry, the most recent NXS winner at Martinsville, seeks to go back-to-back this weekend. Berry returns to the site of his first career NXS win with Jordan Anderson Racing’s No. 31 Bommarito.com/Solid Rock Carriers Chevrolet.

Veteran driver Stephen Leicht jumps back into the car after last appearing at Richmond Raceway in September. Leicht will drive the No. 61 Jani-King Toyota for Hattori Racing Enterprises.

Preston Pardus will climb behind the wheel of the No. 90 Danus Utilities Chevrolet for DGM Racing. It will mark his eighth start of the year.

Ryan Ellis also returns to the track for the first time since Darlington. Ellis will steer the No. 99 Keen Parts Chevrolet for B.J. McLeod Motorsports.

Spencer Boyd’s in the No. 52 Means Motorsports entry.

Mike Harmon Racing’s No. 74 is currently listed as to be announced.

Drivers will tackle the Paperclip on Oct. 30 at 6 p.m. ET on NBC Sports Network.