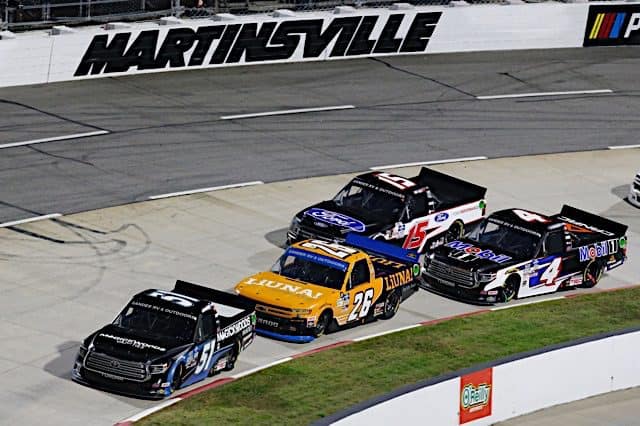 The NASCAR Camping World Truck Series returns to the track for the first time since Talladega Superspeedway, this time running at Martinsville Speedway. Playoff drivers will have one final opportunity lock in their chance to race for a title at Phoenix Raceway.

Forty-one trucks are entered for 40 spots. Due to a lack of points, Norm Benning‘s No. 6 Chevrolet will not make the race.

Colby Howard will make his third start of the season in CR7 Motorsports’s No. 9 Grant County Mulch Chevrolet.

Taylor Gray is set to return for the first time since Bristol Motor Speedway in September behind the wheel of the No. 17 Ford for Team DGR.

Bret Holmes will bring his No. 32 Camping World Chevrolet to the track for the seventh time this season after competing for the win at Talladega before a late spin.

Set to begin his new opportunity as an NXS co-owner in 2022, Jesse Iwuji returns for the first time since June in the No. 33 eRacing Association Chevrolet for Reaume Brothers Racing.

Niece Motorsports brings Chris Hacker back on board after he ran for the team at Las Vegas Motor Speedway in September. Hacker will pilot the team’s No. 45 Sherfick Companies Chevrolet.

Roger Reuse partners with CMI Motorsports for the third time in 2021 and his fourth start of the season. Reuse will drive the No. 49 WCIParts.com Ford.

Spencer Davis will pilot his own No. 11 Inox Supreme Lubricants Toyota for the eighth time in 2021.