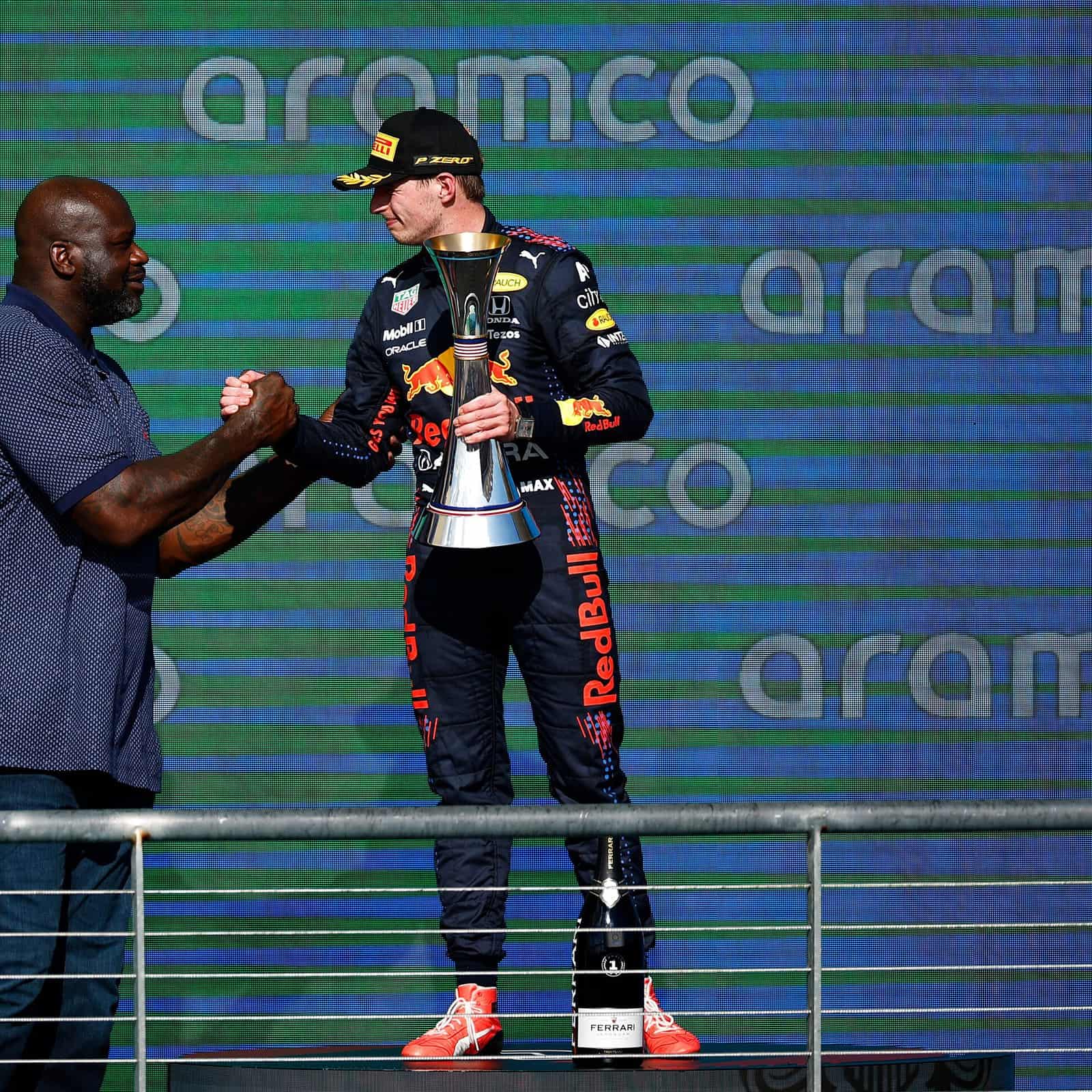 Red Bull and Mercedes used different strategies to give their Formula 1 drivers the best chance of winning the United States Grand Prix at Circuit of the Americas on Sunday (Oct. 24). When the checkered flag waved on lap 56, Red Bull and Max Verstappen prevailed, giving him his eighth win of the year and extending his points lead in the championship over Lewis Hamilton (287.5 – 275.5).

Hamilton did his best to chase down Verstappen but could get no closer than about one second during the final six laps and wound up in second. His consolation prize might be that he claimed a bonus point for the fastest lap during the race.

Sergio Perez took third, finishing where he started. He was never called on to protect his teammate and the podium finish for Red Bull is just what the team expects from the Mexican driver. After his performance in Texas, there is every reason to expect a return performance next week in Mexico City.

Charles Leclerc gave Ferrari the kind of stress-free solid performance that it should hope for. Earning fourth looks like the result the team has been hoping for on a consistent basis. Daniel Ricciardo enjoyed his time in Texas (see below) and finished fifth.

Valtteri Bottas made a late charge and got around Carlos Sainz to cross the line in sixth. Sainz struggled to make headway on the day and finished behind Bottas in seventh.

Lando Norris seemed to be a non-entity for much of the weekend, unable to put together the type of qualifying effort that has come to be anticipated. His race followed the pattern and the best he could muster was eighth.

Yuki Tsunoda gave Alpha Tauri a surprise ninth-place finish. The Japanese driver has faced an up-and-down season but now has six points-paying finishes on the year. Sebastian Vettel snuck into the top 10 during the final laps of the race to give Aston Martin a much-needed points finish.

Hamilton made a dream start from second, even as being pushed off the front straight by Verstappen. Given some leeway by his teammate Perez, Verstappen held on to second and then began stalking Hamilton.

On lap 14, Hamilton pitted and battled Verstappen’s undercut and exited six seconds behind. For Red Bull, the undercut had been performed to perfection, and in a way, it would not be bested on the day.

Even when on lap 30, Verstappen came in after holding a three-second lead, there was a question as to whether the strategy Mercedes had cultivated would work.

The trouble is that by telling Hamilton to go long that he pitted on lap 37, Hamilton pitted, giving up the lead and returning to the track almost eight seconds behind Verstappen. Hamilton was told to bring the tires in gently, knowing full well that they wanted to ensure that they would have pace in the closing laps. But the gap was too substantial to overcome, especially on a track where the tire degradation had been a big factor over the course of the weekend.

That was all Verstappen needed to cruise to the win in the final laps and assert that he is the favorite for the championship with five races to go.

– While the on-track action may have been tame unless you were Fernando Alonso or Daniel Ricciardo, the calls from the pits defined the race. Red Bull chose to pit Verstappen early, believing that track position mattered more than fresh tires, while Mercedes made the opposite call.

The teams have been true to this thinking all season, with both teams having earned wins using it. At COTA, Red Bull found their strategy to be best suited to claim their ninth win of the season and cut into the Mercedes lead in the constructor’s championship (460.5 – 437.5).

Though the final laps came down to a question as to whether Hamilton would be able to pull off another miraculous win, Red Bull had already positioned itself better than their Mercedes counterpart.

– Daniel Ricciardo got to enjoy the moment of the lifetime when he took to COTA in Dale Earnhardt’s 1984 Chevrolet painted in the iconic yellow and blue Wrangler scheme. He turned a lap, let the engine roar and gave a nod to the fans by nailing a donut in one of the turns.

The lap came about as a reward for Ricciardo claiming a podium finish for McLaren this season. Zak Brown, McLaren’s CEO, who owns a robust car collection made the offer prior to the season’s start and was rather happy to lend his car to Ricciardo for his effort.

Earnhardt Jr. responded to the moment by tweeting that he was happy how Ricciardo was celebrating his father.

I’m happy for Daniel. I’m also appreciative for how he celebrates my father. That makes a lot of dads family members and fans smile.

The story continued to circulate with NBC Sports mentioning it on its pre-race to the Kansas Speedway NASCAR Cup Series race.

"My dad would have been extremely humbled. Dad had so much respect for @F1 drivers."@DaleJr on @DanielRicciardo driving his dad's 1984 Chevy Monte Carlo around @COTA before the #USGP. pic.twitter.com/aLbzrleSbo

These two sports rarely intersect, and it may be a little funny that an Australian driver, who resides in Monaco, and drives for British team McLaren might be the one to help the connection, but it does not matter. What a fantastic sight!

– Fernando Alonso waged a personal battle against Alfa Romeo for much of the race. First, he lost a spot to Kimi Raikkonen in a questionable set of maneuvers. Then he battled Antonio Giovinazzi for what seemed like a third of the race but may have been only eight laps.

Regardless, the fight between the three drivers did none of them any good and ended up being all for naught.

– Esteban Ocon, Alonso and Pierre Gasly all had their days scuttled by mechanical issues. The drivers for Alpine and Alpha Tauri, respectively, saw important points days wiped out and for two teams that are battling to finish fifth in the constructor’s standings.

For Alpha Tauri, they benefitted by Tsunoda salvaging the day and finishing in ninth. But for Alpine, a no-points day is tough to deal with, especially as the team that has shown speed has regularly competed for positions in the back half of the top 10.

– This race hosted a number of incidents of drivers getting together wheel-to-wheel and others where they shoved another off the track. While the overall adjudication seemed to fit the instances in question, there still seemed to be question as to what constituted a penalty.

The series has struggled with defining hard racing and questionable contact over the course of the 2021 season. The race at Spa comes to mind, especially regarding Lando Norris and Sergio Perez. This race appeared to be another when there was question as to whether certain drivers should be penalized.

Alonso’s pyrrhic battle with Alfa Romeo hits the mark here. While he and Giovinazzi traded spots both because of F1’s calls and their abilities on track, Raikkonen’s questionable pass on Alonso deserved more scrutiny.

– Verstappen earned this win. Red Bull played a game of cat and mouse with Mercedes throughout the grand prix, pitting him early and hoping that Verstappen would be able to hold off Hamilton as the laps wound down. For his effort, he walked away with the fan voted Driver of the Day award.

He seemed to do so with aplomb. Verstappen never appeared to waver, holding on to the lead and even extending it at moments over the course of the final six laps when Hamilton had cut the gap to under two seconds. Such a drive is exactly what it takes to be a champion and more and more, Verstappen looks like he will be hoisting the trophy at the end of the season.

– Max Verstappen summarized his day by saying, “It wasn’t easy because the tyres were finished – but incredible to win here.”

– Commenting on the enthusiastic American crowd, Lewis Hamilton said, “I think this is definitely our acceptance into the US. What a place to be. It’s a real honor to be out here. I hope we get more races out here.”

– Charles Leclerc, after struggling with his Ferrari in the first half of the season noted, “A very, very good race. A very boring race on my side but on the other hand, it has been a very positive race for us. I mean the performance was incredible today and it’s great to see that on a track where we did not expect to be that quick. So a great surprise.”

Note – Hamilton scored an additional point for setting the fastest lap of the race.

Does anyone know why Shaq “the shill” was there?
Was one of the hundred companies he’s affiliated with a sponsor or something?