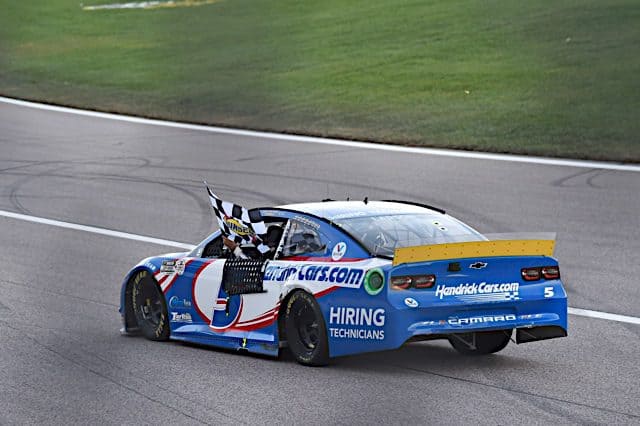 Here we are again. Another race weekend is in the books, and while the track was different and the playoff drivers having good or bad days may have rotated a bit, one thing remains strikingly constant: the winner. Kyle freaking Larson has run off with another trophy, his ninth of the 2021 NASCAR Cup Series season.

Back in June, I tweeted a few interesting comparisons between Jeff Gordon’s record-smashing 1998 season and Kyle Larson‘s 2021 results up to that point.

After the first 17 races of 2021, @KyleLarsonRacin has four wins, 12 top 10s and just two finishes outside of the top 30. pic.twitter.com/j0wYeDpYin

Naturally, some scoffed at the comparison. There was no way Larson could continue his pace the way Gordon did, I was told. After all, Gordon was even better in the second half of ’98 than he was in the first. Well, while Larson won’t equal Gordon’s 13 wins, I’d certainly say Larson has been better in the second half than he was in the first. He only has one finish outside of the top 20 and has finished seventh or better in 10 of the last 13 races. Larson’s numbers won’t go over the rainbow warriors, but someone may have to drop a house on the wickedest team in the west to have any chance at the championship.

See also
The Big 6: Questions Answered After the 2021 Hollywood Casino 400

Anyway, here are a few more notable numbers from the recent trip to Kansas Speedway.

Sunday’s win was the second time that Larson has scored three consecutive victories in 2021. The last time a driver won three straight on two occasions in the same year? It was 1987, when Dale Earnhardt accomplished the feat on his way to 11 wins and a third Cup Series title.

Larson has led 2,397 laps in the Cup Series this year, the most for any driver since previous Hendrick Motorsports star Gordon’s breakout 1995 season. Gordon led 2,610 laps that year, but it should be noted that while there were only 31 races that season, the events were longer as nearly every race on the schedule was either 500 miles or 500 laps. Should Larson not win the championship, it would be the most laps led in a season by a driver who didn’t get the big trophy since Rusty Wallace led 2,860 laps in 1993.

Defending champion Chase Elliott picked up his seventh runner-up finish of 2021 on Sunday. What’s more, four of those have seen him follow teammate Larson across the finish line.

Chris Buescher has run 12th or higher at the end of three of the past four races after just two such finishes in the previous 15 outings. Buescher, who scored a season high of third two weeks ago at the Charlotte Motor Speedway ROVAL, has led seven laps in those four events and moved up to 18th in the standings.

Michael McDowell was 16th at the checkered flag, making Sunday’s race the fourth straight race that he has finished either 16th or 17th. While not spectacular, it’s probably a welcome change after the No. 34 floundered through the previous 11 events, coming home no better than 20th. The 2021 Daytona 500 winner is almost guaranteed to finish 16th in points unless he mounts a charge to overtake Aric Almirola.

Speaking of Almirola, since his surprise win at New Hampshire Motor Speedway, the No. 10 Ford has been 14th or worse in every race. Actually, he’s only finished better than 14th four times all year. His 26th at Kansas matched his lowest result of the playoffs, and his mid-pack finishes are why he was bounced from contention in the first round.

Denny Hamlin nailed his 24th top-10 finish at Kansas, tying a career high he set in 2019. He also hasn’t wound up lower than 11th at the conclusion of any playoff races this year. Still, it has to feel like nothing anyone does is good enough to catch the No. 5 right now.

Ty Gibbs grabbed his fourth Xfinity Series win of 2021 at Kansas, moving him up to 13th in the point standings. Gibbs has only started 17 of the 31 races in the series this year, but is still ahead of four drivers who have started all 31 events.

So Larson could win at Martinsville and finish 2nd at Phoenix and loose the title. Let’s think about that.

He’d only have to finish ahead of the other three. NA$CAR assures that the winner at Phoenix is one of the Focused Four by not allowing any other driver to get close to the lead.

The Playoffs are a joke just as Harvick should have been the champion last year. It’s time for NASCAR to stop this continuity and bring back real stock car racing.

NASCAR playoffs are the biggest joke in all of racing

The comparison isn’t really fair – comparing the pent up demand for an already rare international event to ho hum week 30 something race at of all places Kansas, but as we’ve argued on here constantly to deaf ears down in Daytona, they’ve destroyed a once great sport through a solid decade plus of really poor decisions.

It also didn’t help that there was a red flag within the first 15 minutes of the race start. How many people changed the channel and never went back?

Differences between F1 and NASCAR, let me count the ways! lol For starters, F1 has been “true” to itself a lot more than NASCAR has. F1 has done what F1 does, and while maybe some minor changes, have basically been what they are.

NASCAR doesn’t know what it wants to be. They were a regional southern sport, then chased west coast popularity. They were dangerous and “colorful” working class personalities, then they wanted to be safe and sanitized corporate spokespersons. They rewarded skill and consistency with a season long points Champion, but wanted a crapshoot playoff system instead. They were champions of innovation, ingenuity, and creative interpretations of the rules, but decided spec cars and strict policing would be more fair. They had Ken Squier, Bob Jenkins, Eli Gold, Buddy Baker, Benny Parsons, and thought Darrell, Mikey and a cartoon character named “Digger” would be a better show. Speaking of “the show”, it used to be about racing, then NASCAR decided it should be a political statement. They used to race on all different kind of tracks shapes, distances, and surfaces, then they decided that, like the cars, all the tracks should be the same – 1.5 mile D shaped ovals. And now they wonder why nobody is watching?

MLB doesn’t change its rules when a team wins a division by 20 games or the team that wins the most games doesn’t win the World Series. The NFL (that NA$CAR is chasing and will never catch) doesn’t change its rules when a team with the best record doesn’t win the Super Bowl. They have a regular season and then playsffs that ELIMINATE teams until there are TWO left.

When Larson was fired from Ganassi and banished by NASCAR, he didn’t cry about the unfairness of it. Instead, he hitched-up his dirt car, raced his butt off, won a pile of races and proceeded to show the racing world what an amazing driver he really is. Thankfully, after serving his NASCAR-mandated penance, Rick Hendrick put up his own money to race him in the #5 car and Kyle has performed phenomenally.

I hope he wins the title!