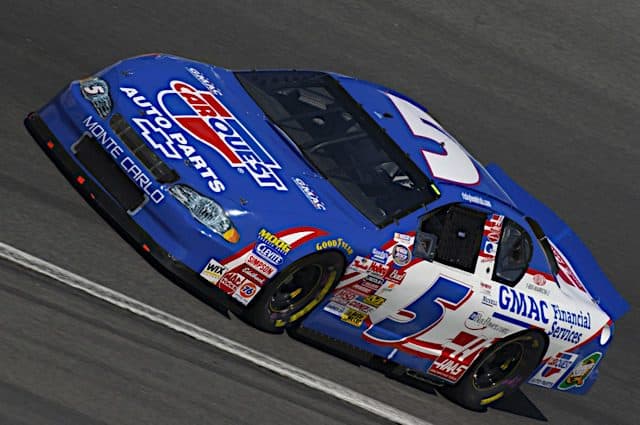 Another week, another Kyle Larson win. Larson’s Kansas Speedway victory in the Hollywood Casino 400 was his ninth NASCAR Cup Series win of 2021 and third in a row. He’s on a roll at the best possible time, with the title race just two weeks away.

Larson’s run looked easy. He led 130 laps, another dominating day, but the beaten and bedraggled fenders on the No. 5 Chevrolet suggested that it was more of a battle for the California native. Either way, 2021 has been Larson’s personal playground, and he’s got two races to put an exclamation point on it.

And don’t forget: Kurt Busch. Busch said after the race that he felt like every decision he made in the closing laps was the wrong one, but he handled the race like the veteran he is, leading a couple of times and grinding out a fourth-place finish as he finishes out Chip Ganassi Racing’s stint in NASCAR. The 2004 champion heads to 23XI Racing next year, an addition that has the potential to take the still-new team to the next level.

On a weekend with title hopes on the line and the playoffs ramping to their climax, the buzz wasn’t about NASCAR at all. But what was buzzing was Circuit of the Americas in Austin, where the Formula 1 faithful gathered. The place was packed and the air was electric.

In terms of television viewers, F1 trails NASCAR in the US, but COTA was the place to be this weekend. Despite the playoff implications at Kansas, the crowd was sparse, though it appeared bigger than the audience at Texas last week.

It’s not just about the numbers, though the numbers pay the bills. It’s about the atmosphere, the electricity, the destination. So how did F1 steal the thunder?

Part of it is that it’s something different for US fans. F1 doesn’t race somewhere in the country 36 times a year, and it’s not always on television at an hour that’s friendly to American fans. Short of jetting off to Europe for a weekend, this is fans’ best chance to see the action in person, and that makes it what NASCAR races used to be: a destination.

The Netflix docuseries “Drive to Survive,” a joint venture between the media company and Formula 1, hit the airwaves at exactly the right time as the pandemic kept many at home, and that series is a PR dream for F1. Netflix may take a little creative license with the footage and play up the drama, but the show brings a racing series that was a little exotic into homes and makes the drivers household names.

It’s not that NASCAR needs a copycat, but it could benefit from finding a way to do what the sport, collectively, did so well 20 years ago, and that’s making sure that fans feel like they know the drivers, like they’re all a part of something. That feeling, of being part of something special, is one fans need to recapture.

But can NASCAR, the teams and sponsors make it happen?

Defending champion Chase Elliott had speed on Sunday, but it wasn’t enough to best teammate Larson. That wasn’t for lack of trying, though. Elliott smacked the wall several times trying to run Larson down in the closing laps, but it wasn’t enough for the win. The good news? Coupled with some bad luck for other contenders, it was plenty to keep Elliott above the cut line with the Martinsville elimination on the horizon.

Three drivers came to Kansas with three wins apiece at the track, tops among active drivers. They leave still tied for that mark. Kevin Harvick came closest, charging hard all day and finishing third. Denny Hamlin had a solid day, finishing fifth, but overheating woes and a late bobble perhaps kept him from an even better finish and from playoff momentum. Joey Logano came needing to win either this week or at Martinsville and leaves needing to win at Martinsville after coming home ninth, but the solid run should lend confidence to his bid.

Austin Dillon wasn’t racing in an overly aggressive manner on the restart where his bobble could have potentially cost Ryan Blaney his championship dreams for 2021, but the situation brings to light an ongoing theme in NASCAR’s playoff era. Just how should the drivers who didn’t make the playoffs, and those who did but are eliminated, race the title contenders?

A week ago at Texas, when half the remaining playoff drivers were involved in an incident to some degree, they were vocal about the way that the others raced them, saying they should respect the contenders more.

But those other drivers are racing for something, too. Some for a job, others for sponsorship to race next year, some simply for pride.  Whatever they’re racing for, they have the right to race for it. That doesn’t mean not respecting the playoff drivers (and the entire rest of the field), but it doesn’t mean rolling over for them, either.

And that goes both ways. If the playoff drivers think their status gives them free rein to run roughshod over the field, they need to adjust their thinking. Respect, after all, is a two-way street.

For the playoff contenders, there’s one last chance to make the final cut, and it comes at a track that’s not sympathetic to that in the least. Tight-quarters Martinsville is the Cup Series’ lowest-speed track but certainly not its lowest-drama location. Passing often means using the bumper and that can mean hot tempers and the last-ditch playoff implications means that it’ll be one to watch.

Besides the elimination, Martinsville can play another role in the title race at Phoenix. It can give drivers who like it a morale boost, and those who struggle leave with a hit to their momentum. One of those who has struggled is Larson, and while he’ll start up front, he’ll have to fight to stay there. Could it be a stumble on the road to Phoenix for the title favorite? And will someone else turn luck in their favor?

If you think Larson’s primary paint HendrickCars.com paint scheme looks familiar, you’d be right. It’s the same scheme that Ricky Hendrick, son of team owner Rick and heir apparent to Hendrick Motorsports, raced in his brief stint in the driver’s seat before he turned to his real love, the business side of racing.

And then came that day. Jimmie Johnson won at Martinsville on October 24, 2004, the second victory of a three-race win streak as he raced in the thick of the championship battle. But he didn’t go to victory lane, never celebrated at all. The grandfather clock sat abandoned as elation turned to horror as Johnson learned along with his teammates and their crews, that Ricky Hendrick’s plane had crashed on its approach to the track and there were no survivors. 10 people, including Ricky Hendrick, his uncle John and two cousins, perished that day. Rick Hendrick was supposed to be on the plane, as was Johnson’s wife, but both changed their plans last minute.

The following week, Johnson won again, fending off Mark Martin, to be met in victory lane by every Hendrick driver and crew member, supporting one another through their loss even as they celebrated.

Seventeen years to the day of the crash later, and it was Larson on the win streak but the young Hendrick’s paint scheme tying them irrevocably together. The future of Hendrick Motorsports changed that day (it’s likely Jeff Gordon who will carry on Hendrick’s legacy now), but its focus did not. In the intervening years, the organization has posted eight titles and is on the cusp on a ninth.

I can’t imagine that I am the first to have thought of this, but why doesn’t NASCAR start their own television network? The NFL and MLB have their own networks and broadcast games and shows related to their sports, and I expect they’re doing quite well with it.

I don’t know anything about how television works, but it seems to me that if NASCAR had its own forum, they could start races when they are supposed to be started…i.e. 1:00 in whatever time zone they’re in that week. They could have highlight shows, shows about the sport’s history, the Dale Jr. download, Lost Speedways, etc.

I think that could do quite well, especially the part about not having races start at ridiculous times. Stop bowing to NBC and Fox, they have zero interest in helping the sport get better.

I watched an F1 race earlier this year. When I see 40 laps without a single car getting passed, it doesn’t work for me.

If they had their own network they wouldn’t get all the $ from TV.

So no one would advertise during races?

If NA$CAR could make more money with their own network they would do it.

Twenty years ago the Dillon/Blaney situation wouldn’t have mattered as much. It would have been one incident in a season-long real championship battle. But because of the current method of deciding the “title” it has enormous implications. And that is on NA$CAR.