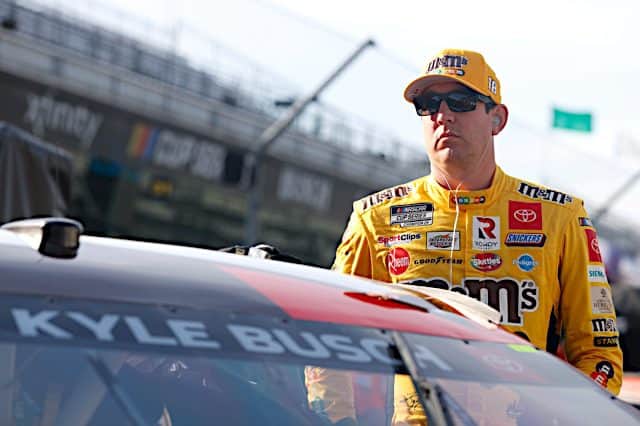 Kyle Busch’s rocky path through the NASCAR Cup Series playoffs took another unexpected turn at Kansas Speedway. Entering Sunday’s (Oct. 24) race, Busch was on the playoff bubble, just eight points above the cut line. It was a slim margin, but not necessarily a reason to panic. Once among his worst tracks, Busch had finished in the top 10 in 11 of his last 13 races at Kansas. Sunday’s race figured to be another good opportunity for him to reach victory lane.

Instead, the afternoon unfolded more like one of Busch’s trips to Kansas from early in his career. Just 23 laps into the race, he smacked the wall and crumpled the right side of the No. 18 Toyota.  A caution allowed Busch’s team to make repairs, and through the rest of stage one he recovered quite well, placing ninth at the end of the stage. But when Busch hit the wall again halfway through the race, the damage was more severe. Without the aid of another caution, the No. 18 lost valuable time in the pits, taking Busch out of contention for good. He ultimately finished in 28th place.

Yet as bad as Busch’s day might sound, it was not the end of his title hopes. Fellow playoff drivers Martin Truex Jr. and Brad Keselowski had similar problems to Busch and had to fight hard just to finish in the top 20. But the real turning point of the race was when Ryan Blaney crashed on lap 224. At that point, Blaney was the playoff bubble driver, and his car sustained too much damage to continue at all. With the No. 12 falling all the way to 37th in the final running order, Blaney lost the sizeable points advantage he had built up over the afternoon from Busch’s, Truex’s, and Keselowski’s struggles.

Blaney’s crash had a significant impact on the playoff grid. With one race left in the Round of 8, Busch is still the bubble driver, holding the final transfer spot to the championship race by a single point over Blaney. Truex trails Busch by three points, with Keselowski only six behind. Joey Logano stands 26 points below the cutoff and probably still needs to win next week to advance. Yet Busch, Blaney, Truex, and Keselowski all have a chance to reach the championship race via points despite difficult races.

By holding on to the bubble spot, Busch showed a level of resiliency that he would not have displayed earlier in his career. It doesn’t seem like that long ago when difficult playoff races, especially at Kansas, tended to knock the wind out of Busch’s sails. In 2013, he got collected in an accident at Kansas shortly after a restart that cost him valuable points in the championship hunt.

More infamously was when Busch spun David Reutimann early in the 2010 Kansas race. Later that day, Reutimann found an opportunity for payback and sideswiped Busch as they entered the backstretch. Reutimann wound up spinning out again, but the contact knocked Busch’s steering out of alignment. The No. 18 team struggled to a 21st-place finish, the worst of the 12 drivers in the postseason.

Busch’s issues on Sunday brought up those old memories of difficult races. Along with the crashes, NBC played snippets of the No. 18’s radio communications where Busch insisted that his car was damaged beyond repair. He even let out a long, audible groan of pure frustration at one point. But when the race finally ended, a much calmer Busch was clearly aware that the race for the championship was far from over.

“(My car) slipped out from underneath me and got in the wall the first time, and that was going to be manageable,” Busch said. “But then the second (crash), it just killed it. (We) gotta look back on the wind direction, I guess, when we were competitive here or fast here, versus what it was today, because today was just not beneficial to me whatsoever.

“We’re definitely not out of it,” Busch added, “that’s the positive of it. I haven’t seen (the points) yet, but reports are third through seventh are really tight. So, just gotta go race.”

Busch’s post-race comments reflect that he is keeping the struggles of Sunday’s race in perspective. Since he began to run better at Kansas about six or seven years ago, Busch has a lot more life experience than he did during his early years in the Cup Series. He has won two Cup Series championships and over 200 races across NASCAR’s three national divisions. He has also become a leader at Joe Gibbs Racing and expanded his team in the Camping World Truck Series. Similar to Tony Stewart, Busch is involved in NASCAR in more ways than just being a driver, and it has made him a less temperamental athlete.

Busch is still a fiery racer with an intensely competitive side. He will undoubtedly be fighting hard to stay in the playoffs next week at Martinsville Speedway, another track where he used to struggle but has improved at considerably. Kansas did not put Busch any closer to the championship, but it did not take him out of the picture either, and he knows it. A younger Busch might have completely thrown in the towel on Sunday, but the veteran racer has learned to recognize the good in a bad day.

Put the lipstick away, Bryan. A pig is a pig. But you make some good points, and anyone who thinks Busch is out of it before he’s actually eliminated doesn’t know Kyle Busch at all.

Exactly right. He hasn’t had the cars this year, yet here he is..