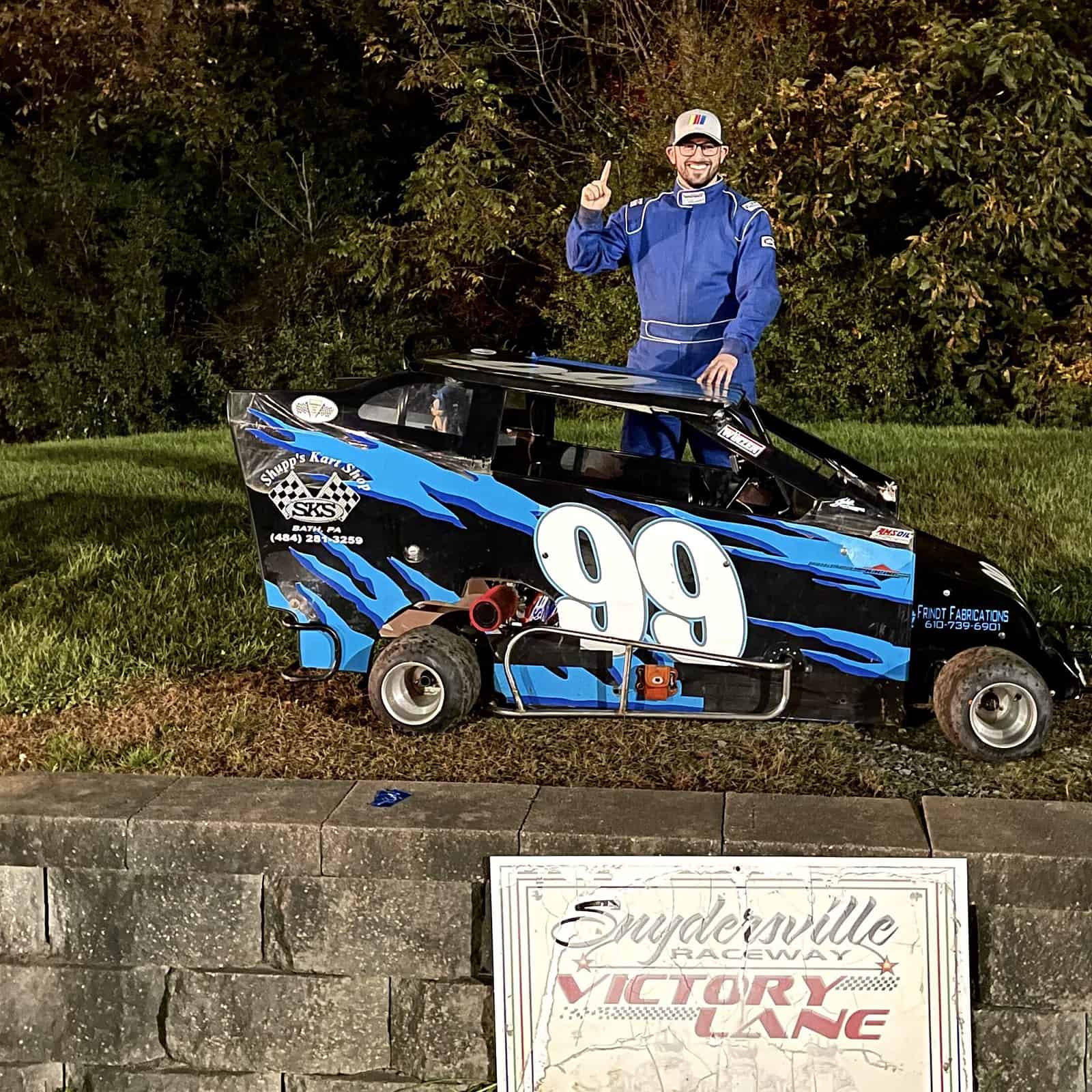 As someone who writes about motorsports, my role is to observe. I watch drivers wheel their machines around racetracks, fight physics, search for grip and look for ways around their competitors while they manage business dealings out of the race car.

I feel like my opinions are generally well informed because I’ve been fortunate enough to speak with those drivers over the past nine seasons and have been watching for far longer.

But it’s (relatively) easy to write and think you know what you’re talking about. It’s another to get behind the wheel of a race car yourself.

So thanks to a friend and his father, I finally got the chance to compete in a full Friday night race at a local dirt track and see — on an extremely hobby and minor-league level — what it means to compete in a race.

The opportunity to race the No. 99 microstock for Frindt Racing, owned by Kevin Frindt and usually driven by his son, Steven Frindt, was the culmination of a friendship started during the COVID-19 pandemic in 2020. Through helping them at their races over the past year and a half, they offered me the chance to get in and see what it’s like in a real race. How could I say no?

See also
Up to Speed: A Good Bad Day for Kyle Busch at Kansas

So on both Oct. 8 and Oct. 22, I found myself at Snydersville Raceway, an eighth-mile dirt oval in the hills of Pennsylvania’s Pocono Mountains, ready to throw on my helmet and Steven’s firesuit to compete against guys who race here every Friday night.

Ready to roll. Perfect fit in the racecar and now we prep. pic.twitter.com/rSdTDSwTQA

For full context, the Frindts let me wheel this full-caged car in a 12-lap mechanics race in June 2020, in which I started third and finished third. That race happened with zero practice and I looked like a dart without feathers. I also got to run a heat race at a different track earlier this season with a different team, but mechanical issues thwarted any attempt at the feature.

So by the time Oct. 8 came around, I was buzzing with excitement, nerves and a hint of anxiety knowing I’d be competing legitimately.

And holy crap, I won the damn race.

After finishing sixth of seven cars in my heat race, two of the top four starters slid up the track on the first lap of the feature and allowed me to quickly move into fourth place. Coming off turn 4 to complete the lap, the driver ahead of me thought the caution was out and backed off. I rocketed through, grabbed third and stayed there through to the checkered flag.

Then, in a twist M. Night Shyamalan couldn’t have written, both of the top two finishers were disqualified for illegal spark plugs, thrusting me into victory lane in my debut.

Couldn’t have ever imagined. Ran P3 but both first AND second place DQ’d. Not how I would’ve wanted it, but ran a really solid race that I’m proud of.

I learned a lot that night, but those positions were all gifted to me. Sure, I put myself in good positions and kept the car clean, but I didn’t work for those five spots gained.

What I learned, though, was the importance of consistency. Driving the right line, lifting at the same marks and getting back to the throttle early all play huge roles in stringing together fast, consistent laps, even if only in a 15-lap race.

That brings us to Oct. 22, the night I learned just how hard it is to make a pass on a single-groove racetrack.

This time, while we still had a normal practice session, we had two-lap time trials for qualifying as opposed to the heat I had run two weeks prior. Despite being surprisingly loose in practice — the first time I’d ever dealt with what a loose car really felt like — the car was perfect in qualifying, and I put down the fourth-quickest lap of 11 drivers.

While I was proud of the effort and results, there was just one problem: I was set to start the race in the outside lane.

I knew I was in trouble, but I didn’t know how bad my trouble was. I dropped from fourth all the way back to 10th because I couldn’t get down to the bottom and every other driver blew my doors off.

First time getting a look at my start Friday night at Snydersville. I knew it was rough, but this video really highlights just how bad it was and just how much my inexperience hurt me. From fourth to 10th.

On the opening run of the race, I worked my way back to ninth before the caution came out. I was frustrated because the car was so much better than the driver, but I also had to remind myself the other competitors were also way better and more experienced than I am.

After restarting seventh due to some shenanigans under caution, I managed to follow one car through to the sixth spot and set my sights on his rear bumper for a top five.

In all honesty, my frustrations felt much the same as Kyle Busch’s on a 550-HP track. I was two tenths of a second quicker than the car ahead of me. But Eddie Geiger, whose No. 63 car was directly in front of me, entered the corner half a car width higher and exited lower to maximize his straightaway.

See also
Stock Car Scoop: How Intense Will Martinsville Be After Kansas?

My runs to his left were all for naught because he cut low and killed my momentum, exactly as he should have been doing. He wouldn’t have been able to pass me on the high side, but because he was keeping me at bay, I was at his mercy.

Sure, if I had more experience, I could have gotten past him. Some advice from the Frindts and other competitors in the aftermath helped teach me what to do differently in those circumstances.

But on a minuscule level, I was finally able to relate to today’s NASCAR Cup Series drivers. For years, I have heard Denny Hamlin, Martin Truex Jr. and others note the difficulty of getting around slower traffic. For the first time, I got it.

It’s also, I’m sure, the same frustration others in slower equipment feel. Ryan Preece battling for 23rd behind Anthony Alfredo, for example, may feel he’s faster in a particular moment but with no luck to get around him.

Every driver wheels their car differently. Experienced racers know where to put their car, when to put it there and how to make it go fast.

I was lucky enough to fall into my first win. I was luckier to get back on track and learn some valuable lessons about the sport I cover for a living.