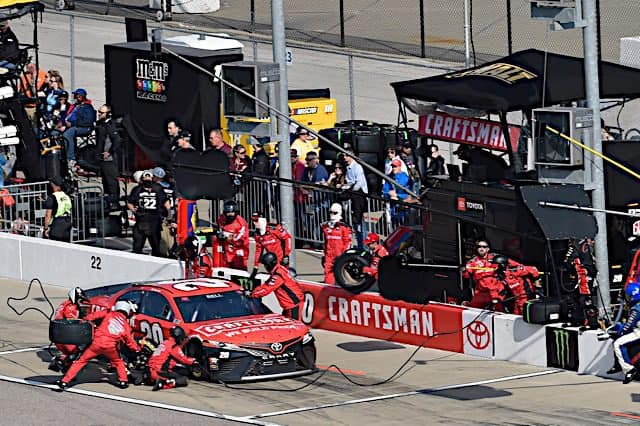 The No. 20 team was found to have two lug nuts loose during the inspection, resulting in the suspension of Stevens for the upcoming race at Martinsville Speedway and a monetary fine of $20,000.

In addition, the Nos. 22 and 14 teams of Joey Logano and Chase Briscoe were also found to have one loose lug nut each. Their respective crew chiefs, Paul Wolfe and Johnny Klausmeier, have each been fined $10,000.

In the Xfinity Series, crew chief Kenneth Roettger, car chief Robert Anderson and crew member Drew Beason have all been suspended for four Xfinity Series events after added ballast on their No. 23 Our Motorsports Chevrolet dropped out of the vehicle, which was driven by Patrick Emerling at Kansas.

Their respective crew chiefs, Jason Trinchere and Jeff Meendering, have each been fined $5,000.

If you slow down the pit stops you can see the crew member miss lugnuts.