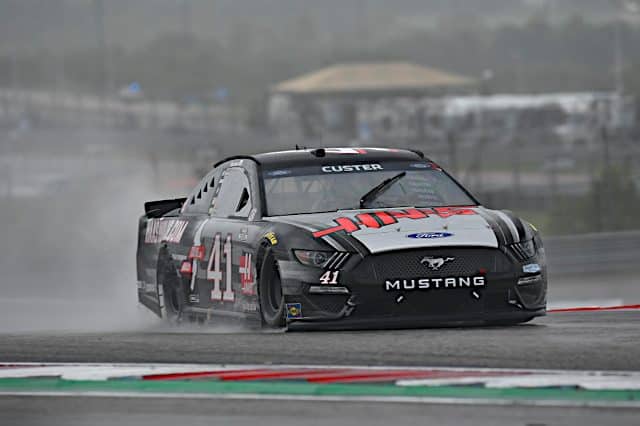 With just two races left in the 2021 season for NASCAR’s three touring series, all eyes will be on the playoff drivers and who advances their way into the championship finale at Phoenix Raceway.

While these drivers will rightfully have much of the attention on them, there are drivers like Christopher Bell, William Byron and Tyler Reddick who have still had strong runs despite being knocked out of the playoffs. Then there’s the overperformers, such as Ross Chastain, Daniel Suarez, Bubba Wallace and Chris Buescher, who tend to deliver stronger results than is typical for their equipment.

But then there are the drivers whose 2021 seasons have been complete flops.

Who would’ve guessed that a driver can make the playoffs and still have an undesirable year? That’d be the case for Aric Almirola.

Almirola turned the playoff grid on its head with his surprise win at New Hampshire Motor Speedway in July, giving Stewart-Haas Racing their only win of 2021 to this point. However, he ended up eliminated from the playoffs at Bristol Motor Speedway, suffering an ill-handling car late in the race. Aside from the win in Loudon, he has just two top fives, three top 10s, an average finish of 20.8 and sits 15th in the standings.

Almirola has made the playoffs every year since joining SHR, though it looks like he’s on pace to collect his second-straight 15th-place points finish. Thankfully, it seems like he’ll be back in the No. 10 Ford for 2022, so if he can at least score just one more win in that time, it will be a much-needed boon for both he and SHR.

Almirola isn’t the only SHR driver to have gone on a downward slope this year. That’s where Cole Custer comes in.

Being the reigning Rookie of the Year comes with plenty of pressure for any young driver. Unfortunately, Custer was far from able to provide the same kind of brilliance on the track this year. He scored a pair of 10th-place finishes at Talladega Superspeedway and Dover International Speedway for his highest results of the season, and currently sits 27th in the standings. Compared to the one win, two top fives, seven top 10s and 16th-place points finish he scored last year, it’s an embarrassing comparison.

Hopefully, this sophomore slump won’t slow Custer down in 2022. With the Next Gen car coming out next year, this will give the 23-year-old a much-needed opportunity to learn and get comfortable with the rest of the field. When he gets the hang of it, more chances are bound to come for him to get his second career win and then some.

For how underwhelming Ricky Stenhouse Jr. has been this season, it’s easy to forget that he’s a two-time NASCAR Xfinity Series champion.

2021 is Stenhouse’s second full-time season competing in JTG Daugherty Racing’s No. 47 Chevrolet. He sits 22nd in the points standings with just two top-10 finishes altogether, a runner-up on the dirt at Bristol Motor Speedway and a sixth-place finish in the series’ inaugural trip to Nashville Superspeedway in June. He has an average finish of 19.3 and sits 22nd in the standings.

If Stenhouse fails to have good finishes at Martinsville Speedway and Phoenix, it’ll be the fourth-straight year that he’ll finish outside the top-20 in the standings. Next year may very well be his biggest test yet as a Cup driver. We’ll see if he can get himself more than just a passing grade on it.

Like his teammate mentioned above, Ryan Preece’s Cup Series tenure has not been worth remembering.

Preece’s biggest moment of 2021 was going to victory lane in his Camping World Truck Series debut at Nashville Superspeedway, becoming just the fifth driver in that series to do so in his very first race. But his Cup Series tenure has still been a struggle. He has one top five and four top-10 finishes, an average finish of 22.5 and sits 26th in the standings. While those stats are better than that of his 2020 campaign, it’s not an exponential improvement by any means.

To make matters worse, his No. 37 ride at JTG Daugherty will fold at the conclusion of this season, which means Preece will be back in free agency. He does have the NASCAR Whelen Modified Tour to lean back on, having won the 2013 title in that series. And he is a proven winner in both the Xfinity and Truck series. So other top race teams shouldn’t pass up the opportunity to put Preece in their cars and give him a shot at redemption.

As painful as it is for me to say it, it’s getting to the point where it’s only a matter of time before the rocket fuel finally runs out on “Rocket Man” Ryan Newman.

Ever since his horrifying final-lap crash in the 2020 Daytona 500, it’s evidently taken a while for Newman to find his rhythm again. This year, he sits 28th in the points with two top fives, five top 10s and an average finish of 22.2. In comparison to last year, he is showing signs of improvement. But he is still on track to score the lowest points finish in his entire full-time Cup Series career. For a longtime veteran such as him, that’s a troublesome sign.

Newman’s former car owner Tony Stewart posted similar numbers in the waning seasons of his career, including a 28th-place points finish in 2015, the exact points position Newman is on pace to finish in. Let’s not forget that Brad Keselowski is set to drive Jack Roush’s No. 6 car in 2022 and beyond.

Even though Newman’s racing plans for 2022 are still undetermined, he’s still hopeful to find a ride somewhere and keep his career going. If a Cup ride doesn’t emerge for him, he might have enough open-mindedness to consider doing a full-time Xfinity or Truck gig with a race-winning team. Perhaps it’ll be just what he needs to keep his “Rocket Man” reputation.