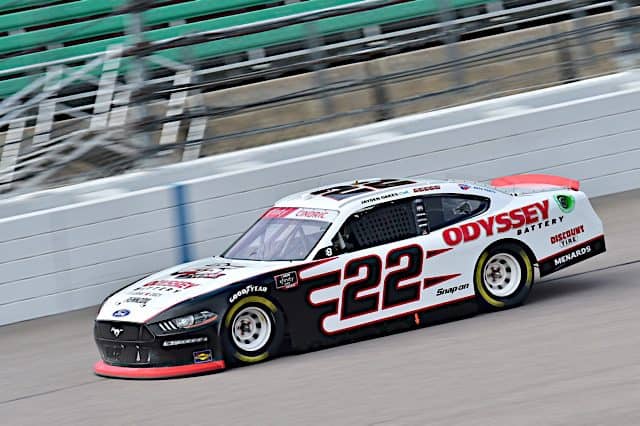 The NASCAR Xfinity Series playoff contenders have one last shot to make it into the Championship 4 and Austin Cindric will lead the way in Saturday’s (Oct. 30) race at Martinsville Speedway.

The reigning Xfinity champion earned the pole after he finished second to Ty Gibbs last week at Kansas Speedway.

Gibbs will start second next to Cindric on the front row, with Kaulig Racing teammates AJ Allmendinger and Justin Haley in row two. JR Motorsports’ Justin Allgaier rounds out the top five.

Michael Annett looks to close out the season strong as he retires from full-time racing; he’ll begin sixth. Daniel Hemric, who is switching to Kaulig next year, is seventh and Brandon Jones is eighth. Noah Gragson and Harrison Burton complete the top 10 starting positions.

As expected, the No. 13 of Timmy Hill didn’t qualify for the race due to a lack of points.

Though Gibbs and Annett are not among the main playoff drivers, their cars (No. 54 of Joe Gibbs Racing and No. 1 of JRM, respectively) are in the mix for the owner’s title.

On-track qualifying will return at Phoenix Raceway so this is the last time this season that lineups will be calculated with the performance metrics formula. 25% each goes to the driver’s and car owner’s finishing position from Kansas, 15% is for where the driver’s fastest lap ranked and 35% goes toward the team owner points ranking.