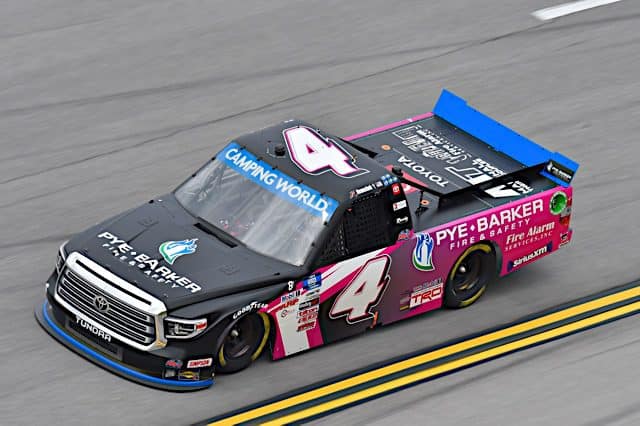 The NASCAR Camping World Truck Series is back in action after a couple of weeks off. John Hunter Nemechek is on the pole for the final race in the Round of 8 at Martinsville Speedway.

Nemechek, who recently announced he would return to Kyle Busch Motorsports next season, is 36 points above the cut line heading into this weekend.

Todd Gilliland slots next to the No. 4 truck on the front row while ThorSport Racing’s Ben Rhodes begins in third. Sheldon Creed will wheel his No. 2 GMS Racing truck from fourth and Matt Crafton rounds out the top five.

Due to a lack of points, Norm Benning was excluded from the race

Gilliland is no longer in the playoffs but his No. 38 Front Row Motorsports team is competing for the owner’s title, allowing him to start ahead of the main playoff drivers.

The lineup was set from an equation that measures driver’s performance over the previous race (in this case, Talladega Superspeedway). Driver’s and car owner’s finishing position is worth 25% each, fastest lap from Talladega is 15% and where the team owner is ranked in the standings is worth 35%. Qualifying should return at Phoenix Raceway unless it gets rained out.