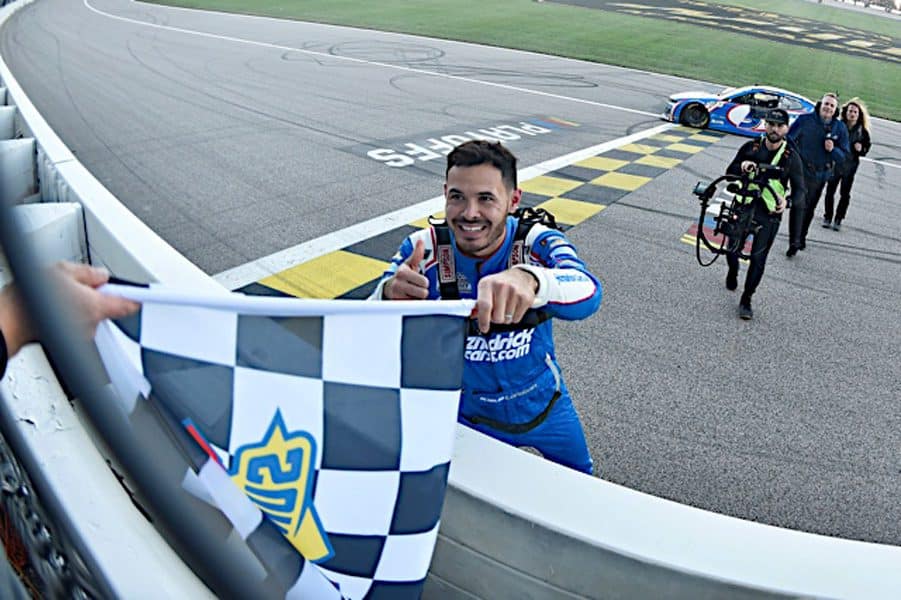 With nine wins already, is Kyle Larson‘s season a successful one regardless of if he wins the championship? – Mark K., Newton, Iowa

Championships used to be the barometer of how success was measured in NASCAR. But it’s not anymore and hasn’t been since the current playoff format was instituted in 2014. Wins aren’t necessarily more important than a championship, but they may be a better measuring stick decades from now than titles.

I remember Brad Keselowski saying something similar at Championship 4 media day a few years ago and that drivers may be judged on how many race victories or Championship 4 appearances they make, rather than how many rings they earn.

Larson’s 2021 season is up there with some of the best campaigns of all time. In that same breath is Kevin Harvick‘s 2020, which saw him fall short of advancing to the Championship 4.

But even “Happy,” who was surely unhappy with the outcome one year ago at Martinsville Speedway, understood that despite not getting the chance to race for a title in his best statistical year ever, it wasn’t necessarily reflective of him or the No. 4 team; it was a product of the format.

When asked if this was one of the hardest things to swallow over his two decades in the NASCAR Cup Series, he responded: “I’ve been punched in the gut a lot harder.”

Sounds like a veteran who has seen the playoffs evolve and knows that while each champion is nothing but deserving, it may not always be determined the “fair” way.

Is it fair that Harvick won nine times and missed out on Phoenix Raceway last year? No, but nobody said this game was fair.

Think about it this way: a driver can win 35 races, lead every single lap but the very last one of the season and not win the championship. That’s how this format is built, like it or leave it.

And let me be clear: I like the format. I think things can probably be tweaked a little bit and Harvick not making it last year was a bad look. But overall, NASCAR has gotten what they wanted out of the playoffs and this format: Game 7 moments (looking at you, Brian France).

Will Larson win the title this year? Nobody knows yet. But, regardless of if he does or not, it doesn’t change the stats. Nine wins (and counting), the most laps led over a 36-race season in the modern era and some of the most dominant runs we’ve seen in recent memory.

He may have a 25% shot at being the champion in Phoenix, but he damn sure shouldn’t hang his head if he falls short of the big trophy.

Does NASCAR really have a “problem” on its hands, and is Formula 1 close to surpassing them? – Mia T., Houston, Texas

Sure, F1’s popularity in the States is rising rapidly, much in part thanks to Netflix’s Drive to Survive along with Max Verstappen‘s and Lewis Hamilton‘s title battle this year on the heels of another great DTS season. And did you see those scenes at Circuit of the Americas this weekend?

The TV ratings bore out that NASCAR, unsurprisingly, won out.

Per @A_S12, NASCAR won the head-to-head U.S. viewership with F1 on Sunday. pic.twitter.com/BJkVh9iG61

But in that coveted younger demographic, F1 won out.

It’s worth reading Jenna Fryer‘s and Jeff Gluck‘s columns this week on how F1 right now seems to have whatever energy that NASCAR had in the early/mid-2000s. It’s the thing right now.

Again, part of that can be attributed to Drive to Survive, and despite it seeming like NASCAR is driving to survive right now (ha, see what I did there?), it’ll be just fine. And is just fine.

F1 comes to the U.S. once a year (didn’t in 2020) and will be coming twice in 2022. Perhaps three times in 2023, but we’ll cross that bridge when we get to it. NASCAR and F1 are not competitors. Never have been, never will be. So even though the two were pitted against each other on Sunday afternoon (Oct. 24) and it seems like Formula 1 had the “it” factor, NASCAR will always reign king in America.

… But what F1 is doing shouldn’t be ignored.

DTS’ impact is way bigger than anybody could have ever predicted, the series’ digital coverage is second to none, broadcasts treat viewers like race fans (without commercials, by the way, thanks to Sky Sports for that) and feels like an event.

Whatever F1 has going on right now, NASCAR would benefit from taking a good, hard look at. A rising tide lifts all boats, right?

“Think about it this way: a driver can win 35 races, lead every single lap but the very last one of the season and not win the championship.

That’s been written before. Another of Brian’s brilliant ideas for his product. That makes cents to NA$CAR.

The obvious flaw with the system that most of zeroed in on right away when this format was first announced.

Every time someone uses the term “playoffs” when discussing the ten championship races, I wanna throw something at them. At least calling it the ”Chase” was using a word that sounded fast. Sorry, a petulant pet peeve of mine…

Thanks DoninAjax for the acknowledgement.

If Kyle Larson fails to win the championship after Kevin Harvick (with nine wins!) failed to make it to the finale last year, surely NASCAR’s much vaunted playoff scheme has to be finally seen as not a legitimate way to end the racing season.
I contend that, by winning the regular season championship, Larson is already the 2021 NASCAR champion and these post-season races are mere exhibition races.
If the idea that NASCAR’s championship is just some carnival side-show act, then maybe they do need to wonder if F1 is going to overshadow them …

I agree with you, but you have to understand the situation you describe is exactly what NASCAR was trying to achieve – the massive upset, game 7 moment, Cinderella story… They just completely misunderstood (or didn’t care) that motorsports fans, even though many also huge fans of say pro or college football, were not, and are not looking for that in racing. In other words, they bought the crap the TV people sold them… It’s a unique sport – definitely not similar to a stick and/or ball sport, and we loved it just the way it was..

In other sports that have a ladder-style championship format, the finalists are head to head in each match with only the remaining team. They aren’t playing the whole league. Also, in these events it usually comes down to player execution and not luck. Racing has so many outside variables that teams/drivers cannot control. These variables are missing from other sports and make the results of a single championship football game (for example) less attributable to good fortune and more aligned with athlete performance.

While true a football team can win every game in the season and still lose the Superbowl, at least it won’t be an exploding football on the first play of the game that abruptly smashes the team into the wall and takes them out of contention. Or it won’t be one of the eliminated teams coming in off the sidelines to break the starting QB’s arm. It will be a failure of their team to execute in the final game (or the other team stepping up and making more/better plays). Injuries happen but unlike a blown engine in NASCAR, losing a player – even the Star QB – doesn’t automatically cost a football team the game.

Last edited 6 months ago by Jeremy
2
0

If a team’s season success depends on winning the Championship. Then there’s an awful lot of failure going around. To my way of thinking, any team that performed better than expectations, had a good season. I would include Michael McDowell, & Jamie McMurray, in that category. Even with the only win for Stewart Hass for the entire season, no way could I include Erich Almirola. He & the 10 team had one bright spot in a miserable season. It’s all relative, but with 9 wins, & counting. Plus winning the regular season doesn’t count as a barn burner. Then this is one tough league. Matt Kenseth won one race, & the championship, & people said he wasn’t a worthy Champion. That’s pure Bullcrap. He earned it over the course of a full season. With this convoluted system that we have now, a team can have a so-so season, get hot, or lucky at the right time & win a championship. We don’t have to like it, but it is, what it is.

For the playoffs, separate all those drivers into a mini race, then have everyone else run the same distance so that it equals 400-500 miles or whatever, and then you have the best of both worlds – non-playoff drivers get coverage, and playoff drivers don’t have to worry about other people getting in their way.