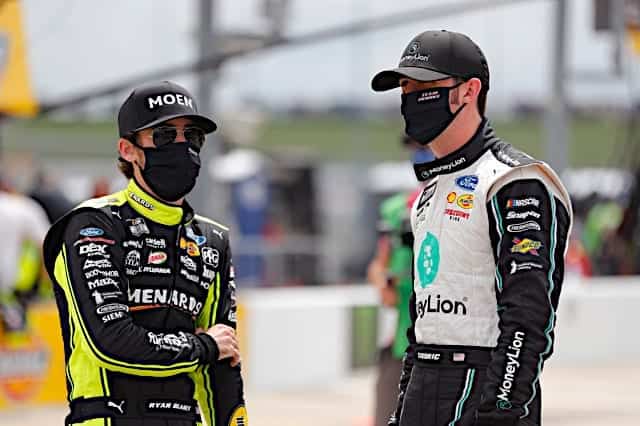 Did You Notice? … The way Ford has struggled during the 2021 NASCAR Cup Series playoffs? As I first pointed out at CBS Sports, they’ve gone 0-for-8 and sit outside Championship 4 position for the first time in the history of the format, implemented in 2014.

That could change this weekend at Martinsville Speedway if any of Team Penske’s three drivers (Ryan Blaney, Brad Keselowski, Joey Logano) wind up winning the race. Even in that scenario, they remain a heavy underdog for a title race that’s likely to be decided among Kyle Larson, reigning Cup champ Chase Elliott and Denny Hamlin.

It’s not the way Ford envisioned this season beginning after their pit strategy allowed them to decide the Daytona 500 among themselves (Cinderella story Michael McDowell ended up winning). Their four victories in the first 10 races led all manufacturers while Penske positioned their group to go deep in the playoffs.

But after that, Ford lost its way, going a dozen races without a victory until Aric Almirola pulled an upset at New Hampshire Motor Speedway. To this day, that remains the only win by any Stewart-Haas Racing car in either Cup or the NASCAR Xfinity Series in 2021. Kevin Harvick, despite reclaiming some consistency in the playoffs, is on track for his first winless year since 2009 just a season after capturing a career-best nine races. Cole Custer has had a massive sophomore slump, finishing no better than 10th in any race, while rookie Chase Briscoe has more on-track feuds (one, Hamlin) than top-five finishes (zero).

That’s left Penske to pull the weight of the entire program, holding their own in the NXS title race with soon-to-be Cup regular Austin Cindric. In Cup, Blaney won the last two regular season races, raising expectations for a career-defining playoff surge similar to Elliott in 2020. It just hasn’t happened, while the rest of the Ford teams fell by the wayside around him; Penske was the only organization to even advance into the Round of 8. Harvick’s No. 4 team was the only one to join them inside the Round of 12.

So what happens with Ford moving forward as the Next Gen debuts on the Cup circuit in 2022? What’s worth tracking is just one of the new Cup teams, from this year or next, are running the Blue Oval brand: the underfunded No. 78 Live Fast Motorsports group co-owned by BJ McLeod and Matt Tifft. That’s left them with a consistent lineup of about a dozen or so entries each week: SHR (four), Penske (three), FRM (two), Roush Fenway Racing (two), Live Fast and the Wood Brothers.

Rick Ware Racing usually fields one or two Fords between its four cars each week, but will take on a bigger role next year with the Blue Oval in its alliance with SHR.

The big move is adding Keselowski to the ownership group of RFR, shoring that organization up over the long-term. But where will their future prospects come from? There’s no NXS or Camping World Truck Series program in operation to develop future talent. That’s the case for Ford everywhere you look in those divisions: Todd Gilliland (Trucks) and Riley Herbst (NXS) were their only playoff drivers besides Cindric.

Cindric will be a huge boost to Penske’s Cup operation, likely to have a better rookie year than Briscoe and compete for wins on road courses. Poaching prospect Harrison Burton from Toyota to drive for the Wood Brothers may also turn out to be a decent move after Matt DiBenedetto largely underachieved much of the year.

But where is Ford expanding beyond Live Fast and Ware? If anything, their ranks may deplete a bit if FRM chooses to scale back to one car or sell both charters altogether. Can Keselowski taking on a bigger role behind the scenes convince them to rebuild their lower division car count from the ground up? After all, he’s the one who closed the Truck team because it was a losing proposition financially.

Tony Stewart appears a bit distracted, agreeing to start up a NHRA team and working hard on developing SRX. Harvick, the leader of his program, turns 46 in December and is only signed up to drive two more seasons at this point.

It’s a little shakier direction than one might have anticipated after Ford won two of the past three manufacturer’s titles, including last season on the back of Harvick’s incredible 2020. How quickly the balance of power can shift in this sport …

Did You Notice? … All the comparisons between Formula 1 and NASCAR this week? Daniel McFadin spoke at length on this topic with his Dropping The Hammer piece today (Oct. 27), so I’m going to take a different approach.

What I see this year is a lot of great motorsports series gaining in popularity. Everybody has a little something where they can puff out their chest and gloat.

NASCAR: From mid-July through the playoff opener at Las Vegas Motor Speedway, there was a streak of six straight Cup races with a year-to-year viewership increase. It’s the first time that’s happened at the sport’s top level since 2011. There was a sellout crowd in the sport’s return to the Nashville metro area along with Watkins Glen International after a 2020 break because of COVID-19. The sport still wins the ratings war, as its 2+ million that watched Kansas Speedway this Sunday far outpaced Formula 1’s U.S. Grand Prix and their 931,000-viewer average this year.

Formula 1: Did you see the crowds at that U.S. Grand Prix? Over 140,000 in attendance seemed to eclipse even this year’s COVID-19-reduced Indy 500 crowd. Their viewership for that event was 1.23 million in the U.S.; while that lost out to NASCAR overall, their viewership beat them head-to-head in the critical 18-49 age range for advertisers.

That 931,000-viewer average is up 38% from just two years ago, raising the stakes for their American TV contract when it expires at ESPN after 2022. Netflix might be among those interested in picking it up, with its Drive To Survive reality show widely credited with helping increase the sport’s popularity.

INDYCAR: The series had its best year of ratings and viewership since 2016, including the sport’s Indy 500, which eclipsed the Daytona 500 as the most-watched motorsports event on television this year. That may only be a one-year deal, as the Great American Race was rain-delayed, but the series will take it as Jimmie Johnson’s jump to their series helped boost popularity. The sport also signed a new TV deal with NBC beginning next season, which puts 13 of their races on NBC’s main network.

SRX: The new all-star racing series averaged an impressive 1.3 million viewers during its six-race, Saturday night primetime stint on CBS over the summer months. It’s more than INDYCAR averaged this year, even including the Indy 500, and what F1 pulled for their U.S. Grand Prix this past weekend. The fan feedback was overwhelmingly positive while the audience remained consistent over the entire stretch.

Each of these series is doing something right in order to boost their audience. I’d argue NASCAR is responding to its fan base more than ever before, made a master stroke in adding more road courses to the schedule and continues to utilize social media better than anyone else in motorsports. F1 has been pumping out new fans like crazy through a once-in-a-generation title race (Lewis Hamilton vs. Max Verstappen), the way in which they’ve made new technology easy to understand and the personalization of their Netflix show.

INDYCAR had some of the best racing on ovals, including one of the all-time great Indy 500s with the popular Helio Castroneves winning. They finally have a cast of young, relatable stars rising up that can build the fan base over the long-term. And SRX, through co-founders Stewart and Ray Evernham, did a tremendous job of creating a brand new stock car from scratch that was incredibly competitive on short tracks. They made aero push a term of the past while bringing popular names like Stewart, Paul Tracy and Bill Elliott back to the present to compete with modern-day stars. Turns out a formula of drama, relatable drivers and quality racing works pretty well after all.

So instead of people yapping back and forth about which series is better, how about they all take a breath and try and learn from each other? Isn’t that how motorsports is going to keep growing? I would argue it benefits each of these series in some small way when they’re all successful. The more they can work together and build on the best ideas, the more there will be happy motorsports fans packed in the stands for years to come.

No doubt that Ford has been missing some speed as the season has evolved but if you look at the round of 8 they still have 3 cars in the hunt, which is more than Chevy and equal to Toyota. If there is one thing you can say about NASCAR, if any one team surges ahead or falls behind, it won’t take much to flip the script because none of them are ever that far behind or ahead of the others.

I doubt Larson will win Martinsville either because there will be at least 5 drivers swinging for the fences trying to make the final 4. The one thing that could play into Larson’s hand is that he will have the first pit stall. I can’t think of another track where that matters more than Martinsville. If there is a late caution and everyone pits, that could make the difference.

Sure hope Penske gets at least one car in the final four.

John hopper
Reply to  Bill B

How come in all discussions about how bad Ford is this year, everyone forgets about the under the radar change nascar made to Fords rear downforce, how can they be competitive by being handicapped, it’d not how hard Chevy worked but what Nascar took from Ford

Missing from both discussions is NHRA. Ford is sparsely represented by Tasca, and gone are the days of Bob Glidden. Curious Ford makes all this horsepower for the street where drag racing reigns.
NHRA draws big crowds and I still tune in for the faster action and speeds putting the other venues on hold till the MOST important last lap. Drag racing is like 1 lap segments to win. 330MPH in 1000ft is incredible and 3.5sec.
Just something I noticed and food for thought.

I might call it a “Master Stroke” if NA$CAR added more short tracks which the fans have repeatedly asked for. But not for road courses.

Get rid of the 550 horsepower

I believe it will be gone with the next gen car.

They really need to lose the stupid splitter! That is what has ruined the 1.5mi tracks. You can’t draft through the corners. The diffuser on the next gen car is supposed to fix that. We’ll see, it seems junking it all together would be best but I’ll keep an open mind.