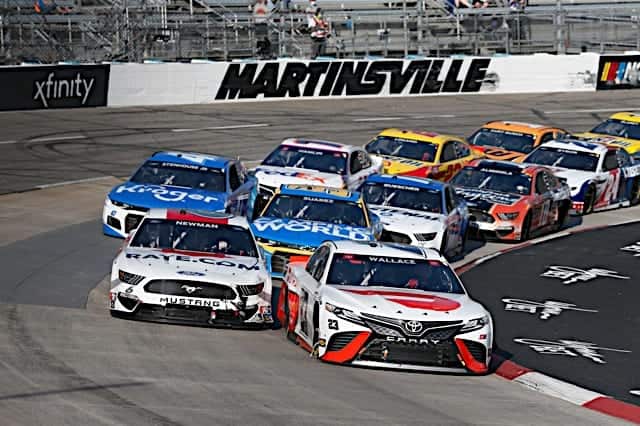 This year was the year of the charter. A system that once had Bob Pockrass saying publicly that a team could find a charter in the dumpster after the season has ballooned and become the vision that the RTA and Rob Kauffman envisioned when implementing it.

Has the charter system stifled growth? A little bit, with 23XI Racing potentially having to run a second car next season without a charter and multiple teams such as JR Motorsports not being able to enter the series due to them. But with equipment meaning even less in the future with all teams running the same third party chassis, the charter system has succeeded in bringing value to race teams.

At the same time, there are holes in the charter system that need to be addressed. Regardless of where the No. 51 finishes in owner points, it’s really obvious that Rick Ware should have a charter revoked. He’s operated charters that have finished in the bottom three in point standings for at least the past four years, sometimes with multiple cars down there. But he’s probably not going to have one revoked because of playing hot potato with them and what cars are finishing down there. That defeats the entire point of the bottom-three rule.

Attendance has been attendance. I don’t think you can really measure attendance well because it’s such a small piece of the pie to these racetracks, and obviously they don’t release numbers anymore unless they have a sellout. Ratings have been up and down this year, probably overall flat when all is said and done.

As much as I have ripped on NASCAR this past week for losing in 18-49 to F1, it should be stated that the Kansas number was not a disappointment. It ranked fourth for the day on cable, and was only behind two primetime reality shows and an NFL pregame show. Traditional television has fallen at a dramatic rate in the past few years, so NASCAR’s run of flat-to-slightly-down ratings means that it is still a valuable television property.

It should be mentioned that NASCAR has not had the major bounce back this fall that football is enjoying. As much as people marvel or wince at crowds, they really do not seem to play that big of a factor in racing compared to other sports.

Some highlights this season for NASCAR were the reemergence of Kyle Larson, the first win for Bubba Wallace, and the first dirt race at the Cup level since 1970.

Perhaps the biggest news item was Brad Keselowski’s move to Roush Fenway Racing as a driver and co-owner. Keselowski helped mold the framework of Team Penske, and turned them into an inconsistent winner at the Cup level to perennial championship contenders in Cup and the NASCAR Xfinity Series. RFR, which has largely spun its tires since the departure of Carl Edwards after 2014, will have a solid lineup in 2021 with Keselowski joining the promising Chris Buescher.

Second was Team Trackhouse’s surprise purchase of Chip Ganassi Racing. With a final transaction of probably over $20 million, Trackhouse and team owners Justin Marks and Pitbull have shown that they are in NASCAR for the long haul. Ganassi was not planning on selling, but the offer from Trackhouse was too lucrative to turn down. CGR, a NASCAR team that has had great talent marred by inconsistent equipment, will bow out after next weekend and 21 seasons since Ganassi bought controlling interest of Felix Sabates’ old SABCO team.

Larson has become the breakout star of this season. Obviously, he had name value entering this season, and he had fans, but he has become at least the second most popular driver among fans in NASCAR. Even if he doesn’t end up as champion, it’s very hard not to call him the driver of the year. What may have been William Byron’s award to nab after his second career win at Homestead Miami Speedway earlier in this season ended up being his freshman teammate’s.

With all of this being said, the explosive growth of F1 this season, in particular in the 18-49 demo, casts a bit of a shadow on NASCAR’s relatively solid spot in motorsports. NASCAR has an advantage over F1 in that advertisers cannot really run commercials over F1 television, but if F1 starts routinely beating NASCAR on the demo, there’s going to be even more questions for the sanctioning body going forward from its partners right now.

Who will advance into the championship round this weekend at Martinsville Speedway?

It’s pretty crazy how entering this weekend, across all national touring series, the only driver locked into their respective series’ championship game is Larson.

The drivers that I have advancing to the championship race next year in the NASCAR Gander Outdoors Truck Series are John Hunter Nemechek, Ben Rhodes, Sheldon Creed and Stewart Friesen. Matt Crafton enters this race in the top four, but he’s largely had a down year and Friesen is a better short track driver.

The top four in Xfinity- Austin Cindric, A.J. Allmendinger, Justin Allgaier and Daniel Hemric– will remain the same after the race on Saturday. Hemric is a bit of a question mark with just how snake bitten he has been in his career, but he’s way more reliable than any of the drivers below him in points. Being able to just finish in the lower series is going to be a big positive to a driver’s hopes, and this veteran class seems to know how to do just that at a place like Martinsville.

And then there is Cup. Larson is locked in, Chase Elliott and Denny Hamlin should be able to rest fairly easily as long as they do well in the first two stages. That leaves five drivers with, with three of them ranking among the very best in Cup on short tracks. And of those three, the favorite has to be Martin Truex Jr. to win and get into the championship round at Phoenix Raceway next weekend.

I had been an advocate of some form of franchise system in NASCAR long before this system was started. There are some parts of the current charters that I don’t like, but it’s way better than nothing. It really hurt to see owners who had supported the series for years, having to close up, & only walking away with what their shops, & equipment brought in a distressed sale. The people looking smart are the ones who picked up charters when there was almost no demand.

I love the way you people down play track attendance. If you have 20,000 empty seats at an average ticket price of $50.00 that’s a million dollars. Not exactly chump change. That’s a lot of lost revenue. At track attendance is more of state of the sport then tv viewership.
If Trackhouse is in it for the long haul they must have money to burn. Simply because they paid way over the market value if a franchise to begin with. This is evidenced by the fact that JR Motorsports backed away from paying from a charter purchase because the value was not there. While many may think it’s great to see non racing folks buying into the sport they don’t have any knowledge of Warner Hogdin, J. Stacey, Larry Lopatin and others. I’m not against the charter system. I would have liked to have seen a limit of three charters per team.
The tv deal between NASCAR and F1 is ignoring the fact that the IRL tv viewership is on the rise? Penske is making a difference over there.

The NASCAR tracks will be hustling to up at-track attendance once the new TV deal(s) happen after 2024. I imagine the TV money will be substantially less after 2024 than the 2014 broadcast fee agreements.

NASCAR is a very expensive sport for the networks to broadcast. It probably requires nearly as much technical equipment and personnel to show a “regular” NASCAR race than it does to broadcast the Super Bowl. With the shuttering of NBCSN, NBC will not be able to use as high a percentage of the cable subscriber fees from USA Network (primarily an entertainment channel) to pay rights fees to NASCAR. It is entirely possible that NBC may not even bother to bid in 2024. ESPN has too much money invested in football, basketball and baseball rights fees (especially college football), to pursue NASCAR. Also, they were unhappy with the ratings they had during their previous NASCAR tenure. CBS has said “No!” to NASCAR ever since BZF passed them over for the very first big TV deal back in the early-’00’s. Fox does OK with NASCAR, but they probably don’t want to broadcast any races past the start of the NFL season. However, there might be a big streamer (Amazon) who would be willing to pay big for more sports content like NASCAR, but then fans will have to pay for their TV NASCAR races…

The trouble is, that’s what NASCAR wants to happen.