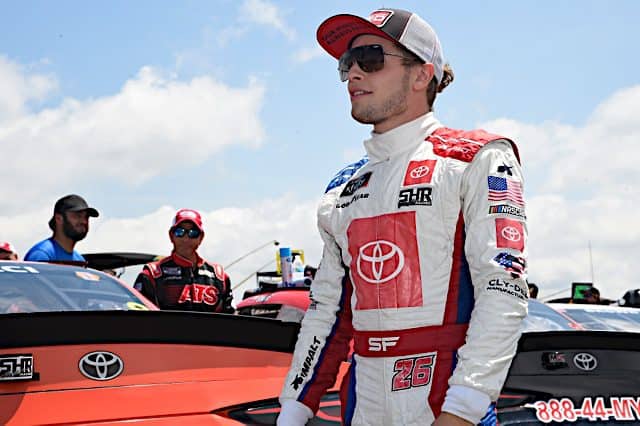 On the same day that Ty Gibbs won his fourth NASCAR Xfinity Series race of the season at Kansas Speedway last Saturday (Oct. 23), a connection between two very different racing series was being made in Austin, Texas.

The Circuit of the Americas in Austin hosted the United States Grand Prix weekend in front of a whopping estimated 400,000 people in attendance. To put that into perspective, that’s twice the capacity of the Daytona International Speedway grandstands.

While the main event was on Sunday, Saturday featured Formula One’s qualifying sessions. Earlier that day, however, McLaren driver Daniel Ricciardo was running exhibition laps around the 3.4-mile circuit in one of the unlikeliest of vehicles — Dale Earnhardt’s 1984 Wrangler Chevrolet Monte Carlo.

We've all got our dream cars, and this is @danielricciardo's! ?

His prize for his first podium for @McLarenF1 was a drive in his hero Dale Earnhardt's iconic 1984 Chevrolet, which is now owned by Zak Brown#USGP ?? #F1 pic.twitter.com/BT6Wm4XLqt

Ricciardo, whose F1 number is the No. 3 after his childhood hero Earnhardt, earned the ride after team principal and now car owner Zak Brown promised a reward for winning the Italian Grand Prix earlier this year.

It isn’t the first time NASCAR vehicles have taken to the technical circuit, as NASCAR hosted its first event weekend there earlier this year in May, but it’s not often you see a stock car become one of the bigger news stories of an F1 weekend.

It highlighted a connection between the world of open wheel and stock car — a connection that has always been there but many are quick to forget. F1 drivers interested in racing NASCAR is not at all farfetched.

Guenther Steiner says Daniil Kvyat will be at Martinsville Speedway this weekend. “Danny is coming over to have a look at it because Danny – in the moment doesn’t drive in F1 – (to see) if there is anything interesting around for him.” https://t.co/92IWx4w9m6

If Kvyat were to make a NASCAR start, it likely would be in the Xfinity Series. After all, he certainly wouldn’t be the first.

The Xfinity Series is no stranger to welcoming drivers from other disciplines into the NASCAR fray. Many F1 and IndyCar drivers have gotten their start and even became successful in the series. That includes current series’ championship contender AJ Allmendinger, who many soon forget began his professional racing career in CART in 2004.

Former Haas F1 Team reserve driver and part-time IndyCar driver Santino Ferrucci currently balances his current racing career between wheeling the No. 45 Rahal Letterman Lanigan Racing entry in the NTT IndyCar Series and the No. 26 Sam Hunt Toyota Supra in Xfinity. Former Indy Lights champion Sage Karam has made three starts for Jordan Anderson Racing in the No. 31 in 2021.

Don’t be mistaken. Open-wheel racers interest in the Xfinity Series is no new concept.

Of course, there’s a common denominator to most of this open wheel interest and success: road courses. And with six road course events scheduled next year on the series’ calendar, there won’t be a lack of them anytime soon.

The sudden increase in road-course venues have provided a haven for drivers that are accustomed to turning right, giving them ample opportunity to be successful enough to challenge for a championship, opening the door for any open-wheel driver that would like to come into the series to do more than have a one-off race.

Two examples are current series point leaders Austin Cindric, who has experience in sports car racing, and the aforementioned Allmendinger. Both are the only playoff drivers to have victories on road courses in 2021, earning three of the seven road course wins this season. Each has five wins total in 2021, and appear to be the championship favorites heading into the final two races of the season.

The two sit on top of a very soft 47-point cushion above the playoff cut line heading into Martinsville Speedway this weekend on Saturday, Oct. 30, which is good news for the road-course ringers, considering that Martinsville has acted as a venue that is friendly to those that are used to shifting gears on a lap-by-lap basis.

I will pay to see American short track drivers like Larson ,and Bell, but keep the ex f-1 drivers out of NASCAR, I am not going to spend my hard earned money on ex f-1 drivers i have no intress in watching them, send them to indycar