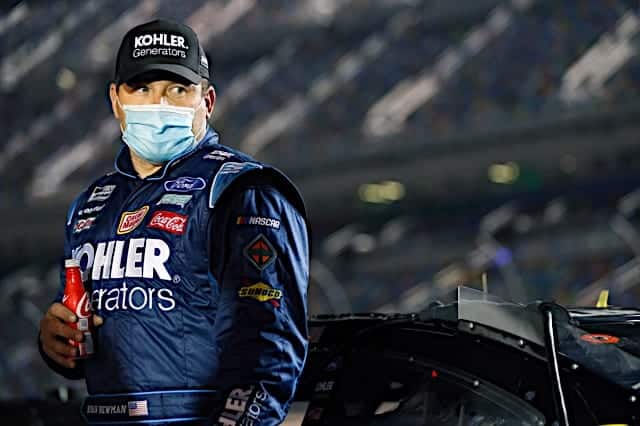 Plenty of Silly Season dominoes remain to fall before the 2022 NASCAR season begins, and perhaps the most high profile of those is the status of Ryan Newman.

I mean, who else comes close? Technically Christopher Bell‘s 2022 plans haven’t been announced, but no one seems to be expecting anything but an extension for the 2021 playoff contender at Joe Gibbs Racing. Then there’s Matt DiBenedetto, whose situation has certainly garnered headlines and online discussion, but who still doesn’t boast a win in a NASCAR national series. Ryan Preece, the potential move of Michael McDowell depending on what happens to Front Row Motorsports — intriguing, yes, but the key words here are “high profile.”

And Newman certainly has been that for much of his career. Since exploding onto the scene with a 10th-place start in his very first NASCAR Cup Series race — before running even a single Xfinity or Camping World Truck series event — the Indianan has been a mainstay of NASCAR’s highest reaches, snagging along the way 18 Cup wins and hundreds of top fives and top 10, plus a near title in 2014.

Newman’s 2021 of two top fives and five top 10s aren’t exceptional, but in context (as in, they come at the now-middling Roush Fenway Racing), they’d probably at least be good enough for another season in the No. 6 under most circumstances.

Except the status quo is changing. Earlier this year, Brad Keselowski bought into RFR, announcing along with the investment that he’ll be in the No. 6 in 2022.

While RFR operates two charters, a move to its second car isn’t in the cards for Newman, as teammate Chris Buescher will return in 2022 in the No. 17. From a performance perspective, Newman might’ve been a downgrade anyway; despite having one more top five than Buescher this year, Buescher surpasses him in top 10s (seven) and has an average finish of nearly five positions higher.

Expansion? Third car? Maybe a decade ago, but these days, charters are the currency that beget Cup teams, and the market is just a bit crowded. Stranger things have happened, but there’s been little to no charter chatter involving RFR entering the offseason, which likely indicates the option isn’t even on the table.

Which begs the question: when the series visits Martinsville Speedway and Phoenix Raceway the next two weekends, is an undercurrent of a storyline the possibility that Newman may be running his final few Cup races? Perhaps his final two ever?

Keep in mind Newman turns 44 in December; many of his peers who came up around the same time have since retired, with Kevin Harvick the chief (though significant) outlier. He hasn’t visited victory lane since 2017 at Phoenix, while still with Richard Childress Racing. He also took center stage in one of the most violent NASCAR wrecks in recent memory at the 2020 Daytona 500, one that saw him out of a car for multiple races (a break that would have been even more significant had NASCAR not paused its season for over two months due to the COVID-19 pandemic).

Newman has long been categorized as a gritty racer, the type who drives practically every lap while he’s battling for the lead, someone who’ll famously make it strikingly difficult to pass him, even if he’s not on the lead lap. With that mentality, one would imagine he’s the type who’d prefer to race as long as he can, despite hurdles such as the 2020 Daytona International Speedway crash.

He also doesn’t give off the vibe of someone who’d be willing to step into lesser equipment to do it. Since his 2000 debut, Newman has always been in either elite or once-elite, still-well-funded racecars, from Team Penske and its affiliates to Stewart-Haas Racing and most recently RCR and RFR. If he’s to dip below RFR in terms of prestige, chances are he’ll be even further from breaking back into victory lane than he has generally been in the No. 6.

Well, probably. It’s important to entertain the possibility that the upcoming Next Gen car will even the playing field a bit more and allow some of the midpack organizations to challenge for top 10s even more than they have in recent years (see: FRM and Spire Motorsports beginning to pop up in the top half of the field outside of superspeedways, something that was a deep rarity years ago). After all, some drivers and teams have suggested following the recent Next Gen tests that the FRMs and Spires of the world could become players in a way they haven’t been.

But you have to wonder if Newman would be willing to take that chance — to move to, say, FRM or Rick Ware Racing. It’s possible the ceiling of those teams — even with a Next Gen boost — might fall below what he’s able to achieve right now in the No. 6.

With practice and qualifying likely to return in 2022, the option of a third RFR car, albeit part time, has been floated, too. Given the reported limitations on the purse unchartered teams can earn, sponsorship would be a need — though that’s something for which Newman’s never exactly struggled.

I think that’s what he’s going to go with, actually; RFR reportedly already offered him such a setup, and he didn’t outright say, “nah, I’m good.” Which is a roundabout way of saying that no, Martinsville and Phoenix won’t be Newman’s last races. At minimum, he’ll catch on part time with RFR.

That’s not where my theory ends, though.

All right, so, remember the early days of the Truck Series? When in the early 2000s, you might see former Cup guys dipping down to try their hand at a full Truck schedule and championship? I’m talking drivers like Bobby Hamilton, Ted Musgrave and Johnny Benson, all of whom even won titles. Ricky Craven, too. Steve Park. Jimmy Spencer. List goes on.

It’s not as much of a thing these days. Johnny Sauter’s arguably the one driver there now who tasted success in upper series and whose career in said series is likely complete. The rest of the 2021 roster is largely made up of up-and-comers, plus veterans like Matt Crafton and Grant Enfinger who’ve probably reached their peak potential.

Would Newman be resistant to a lesser ride in Cup but a top-tier one in Trucks? It might not be far-fetched. While he was once a slightly more common presence in Xfinity, Newman has just seven Truck starts to his name since 2008, and he’s finished in the top five in six of those seven races, including one win. The series’ driving style fits his — hard-nosed, often racing for every scrap of room on the track each lap.

He’s never won a NASCAR championship. Perhaps that changes — except in a truck instead. And with one of the series’ top teams, whether that’s GMS Racing, Kyle Busch Motorsports, ThorSport, etc.

Even if that doesn’t happen — and nor does the part-time RFR bout — it still seems unlikely we’ve seen the last of Newman. At minimum, he’d be a great get for any team on a dirt track, of which there are now three on the national schedule between Cup and Trucks. Much like former teammate/car owner Tony Stewart, there are plenty of non-NASCAR opportunities at local tracks around the country, too.

So this weekend? Sure, it could be the last time we see Newman on a full-time Cup level — and even that remains a nebulous question. But don’t toss out your merchandise and memorabilia just yet; chances are his final laps have not yet been run.

It’s a sad fact of life in the top levels of any racing series, that only the very top superstars get to go out on their own terms. For most of the others, the decision is made for them. The days when NASCAR’s top stars drove into their late 40’s, & even 50’s are long gone. In those days many top drivers didn’t reach the Grand National, later to become the Cup series until much later in their careers. Now with kids starting in carts at a very young age. The supply of drivers entering the feeder series in their teens, & being experienced enough to move up & be successful as soon as they are age qualified, has changed the dynamics for veteran drivers with more expensive contracts.