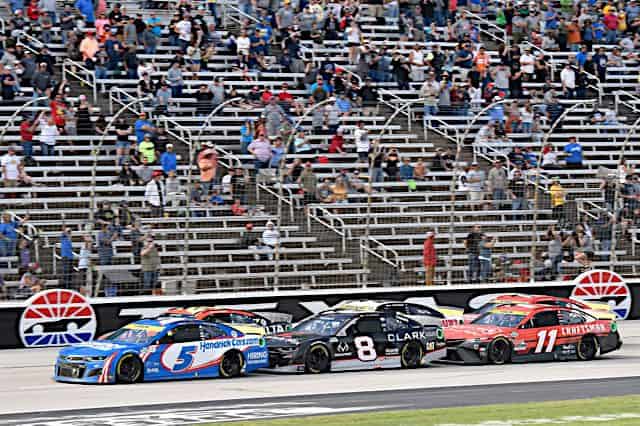 Luken Glover: Absolutely! Tracks like Rockingham Speedway, North Wilkesboro Speedway and Fairgrounds Speedway Nashville have topped my list, but if Bowman Gray is a realistic possibility, it immediately goes to the top. It combines three elements of measured success: history, short track action and a stadium atmosphere. Plus, it’s in North Carolina. There are only approximately 17,500 seats, so more seating would need to be added. The other issue is the infield, which doesn’t have a pit road or hauler lot. It would likely be a cool exhibition event for now, but it something that should definitely be looked into in the near future.

Clayton Caldwell: If NASCAR can pull it off, sure. I’m not sure of the specifics, but I don’t think the track has a pit road that is workable for the Cup teams, so that could be a challenge. An exhibition race like the Clash would work, but running an actual points race there may be a challenge. For the Camping World Truck and Xfinity series, it may be more likely.

Josh Roller: Does a three-legged dog swim in a circle? Yes, NASCAR should race there. Now, it should be an exhibition race if it’s any of the three national series. The ARCA Menards Series East should race at Bowman Gray Stadium, no doubt. The track would be a great place to host an exhibition race, like the Clash. I would like to see NASCAR convert one of the two exhibition races to a points race. With the one remaining non-points race, it should take place on various short tracks and — if the LA Coliseum is a success — stadiums across the country. And Bowman Gray should definitely be on the shortlist.

Corporate sponsors often hold drivers to a high standard of personal conduct. Considering the reports coming out regarding Liberty University, should teams have similar expectations for the ethics of companies that sponsor them?

Caldwell: This sport is lacking sponsors as it is. Do I need to go back and rehash all the Fortune 500 companies who have left the sport in the last 10-15 years? Once we start setting a standard like that, every other sponsor that enters with even a hint of a bad past will be questioned. That’s not fair to the race teams to do that.

Stumpf: For situations like the Liberty news, it all comes down to whether teams think the money they receive makes any potential backlash worth it. Hendrick Motorsports and the No. 24 team may decide that they can’t give up the funding that Liberty provides them, and if so, they will have to deal with any controversy that follows. On the other hand, they may decide that the money isn’t worth it and terminate their deal. If the teams want to hold the corporations to higher standards, that is their decision. But if they don’t limit what the corporations can do, they will be forced to deal with any potential backlash by being associated with them.

Glover: Sponsors should be held accountable, but it is a different from a driver because a company involves several individuals. The problem today is that sponsorship is extremely important, making it very hard and unlikely for a team who doesn’t have guaranteed backup to drop them. Liberty is under a microscope compared to other schools and organizations because of their background and values; this is not the first time that a reported slip-up has gotten it immediate national exposure. I can’t speak for all the cases, but some involved the student getting themselves into a situation off campus that had nothing to do with the university in the first place, while some involved the student violating several conduct codes that brought on horrible consequences. This is serious and needs to be closely investigated, but more details need to be revealed. Because of that, Hendrick should not drop Liberty currently. If they did, I can name quite a few corporate sponsors off the top of my head who should have met the same result in recent years.

After seeing immense crowds for the Formula 1 race at Circuit of the Americas, some NASCAR drivers suggested a lack of promotional effort from certain tracks as a reason for comparatively dwindling attendance at NASCAR events. Do you think track promotion is a big part of the attendance decline?

Stumpf: Clearly, Formula 1 does a much better job of promoting its races than NASCAR does, and a lot of that stems from demographics. Younger people have been drawn to F1, and that is a key demographic that NASCAR lacks. If  they want to improve promotion, the sanctioning body and the tracks need to reach out to the 18-49 crowd. However, the crowd at Circuit of the Americas was also a product of it being the lone F1 race in America in 2021. NASCAR has 36 races throughout the year, and that allows fans to choose which ones they want to attend. For F1 fans, everyone went to Austin because it was the one chance that they had to see a race in person this year without leaving the country. The demand for more races is clearly there, and that is why I support the decision to have a second race in Miami.

Roller: The track promoters aren’t the sole reason for a decline in attendance, but they play a big role. When you hear that someone lived in the very town or just miles away from a given track and they didn’t know a race was going on, that’s a big red flag. When NASCAR is going to Richmond Raceway, everyone in central and northern Virginia should be aware there’s a race. When Texas Motor Speedway hosts a race, the Dallas-Fort Worth metroplex should be blasted with ads for the race. Drivers should be involved and required by NASCAR to participate in a minimum amount of promotional work. After all, don’t they want NASCAR to succeed? If NASCAR is succeeding, more people are attending the races — and the more money sponsors will be willing to pay for sponsorship, race purses will increase, all adding up to more money in their bank accounts.

Glover: Promotion likely isn’t the biggest reason for the decline, but it does contribute to it. If you look at the ways tracks promoted their events in the 20th century and early 2000s compared to now, it is night and day. I can remember seeing several billboards in the 2000s for Richmond in the vicinity. Now you are lucky to see more than one, if at all. Tracks used to bring special events for the race weekend as well. Now they have several vendors, but the pre-race events are almost nonexistent compared to past times. Promotion is a piece of the puzzle that needs to be put in place for attendance to be on the rise again.

NASCAR seems willing to strip poorly performing tracks of races in the future. What would you consider to be the most important performance metric: TV ratings, attendance or something else?

Roller: Ratings and attendance need to both be taken into consideration; those are probably the two most important factors. When a track begins to have a pattern of struggles, NASCAR needs to turn to every party and ask why. Is it the slot on the calendar? Is it the package? Is the promotion meeting community standards? Is the race consistently on cable instead of broadcast? What else is going on in the area to attract potential fans away? Does the track have two dates when it shouldn’t? There will likely be many factors to why a track begins to struggle, which won’t be fixed by one simple Band-Aid.

Caldwell: My standard has always been the kind of racing a track puts on. We spend a lot of time comparing racing to the stick-and-ball sports. If the stick-and-ball product is not good, fans won’t watch, period. That’s why the NFL is No. 1; it has a tremendously entertaining product. For some reason, some think NASCAR is above that. Racetracks are an essential part in how exciting a race is. It’s an essential part in how great the product is. If a track’s racing has been bad for a three- or four-year period, it should be removed. Nothing else should matter. Not how much money a company has poured into a track, not where the track is located, just how good the product is. NASCAR’s recent mentality has been to put races in untapped locations to help grow the sport. If that was NASCAR’s mentality when this sport was built, we wouldn’t have Darlington Raceway, Bristol Motor Speedway or Martinsville Speedway on the schedule. The reason those tracks are on the schedule is because they put on great racing. That’s what the standard should be.

Stumpf: I consider uniqueness to be one of the most important measures. There is a plethora of 1.5-mile tracks on the schedule that were built in the late ’90s and early 2000s in order to accommodate large crowds in huge metropolitan areas. Now that the crowds are no longer there, having nearly a dozen 1.5-mile races on the schedule feels redundant. None of these tracks should be off the schedule entirely, but these tracks — and most tracks in general — should have only one date. This would allow NASCAR to increase its schedule diversity and tap into new and unproven markets. Meanwhile, TV ratings can’t be an accurate measure. Some races are on network television while others are on cable, and the playoff races generally have lower ratings because they clash with the NFL season. Attendance can also be deceiving, because a race can look good with a 40,000-seat sellout while a race that seats 100,000 but only has 50,000 looks empty. The performance metric for adding or removing dates should ultimately come down to a measure of schedule diversity, fan popularity, market saturation, and — if they can be accurately measured — fan attendance and TV audience.

To even think that the only criteria for a ‘good’ sponsor is anything beyond whether the check clears is ridiculous. The last thing Nascar needs right now is an ethics committee, although drumming Larson out of Cup last year teeters on the edge of that.
Why not ban William Byron for attending Liberty U? There is no need in America to hunt for crimes to punish. There’s enough real ones.

That is a very dangerous attitude to have which can lead to promoting and enabling all kinds of malign behavior. You’re saying you’d take a check from Epstein’s modeling agency slap their logo on your car and fire suit then head out to do a commercial or two?

The teams need to fire their counsel if the contract they have with sponsors doesn’t include a termination clause for certain actions of the corporation.

Seems like I watched a video where Tony Stewart said almost the same thing about Talledaga. LOL, LA is going to be an interesting watch, nonetheless, all teams are invited but whether or not all of them come is anyone’s guess at this point.