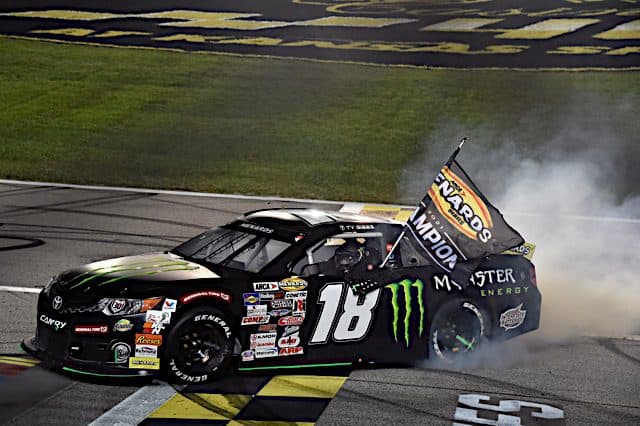 When Nick Sanchez took the checkered flag to win the Reese’s 150 at Kansas Speedway on Saturday (Oct. 23), he concluded the ARCA Menards Series season. Ty Gibbs won the title on the strength of 10 wins while Corey Heim notched six victories en route to second place. Sanchez, Thad Moffitt and Brad Smith rounded out the top five in points, respectively.

Of those five, Smith is the only driver born before 2000. ARCA increasingly has become a developmental series with fewer long-time participants who contend for victories. Is ARCA succeeding as a proving ground? Which of its drivers this year deserve a promotion to NASCAR?

Gibbs completed one of the greatest all-time seasons in ARCA history. He set a new all-time best average finish of third and achieved that with a 27th-place DNF at Talladega Superspeedway. He won at a variety of different racetracks led more than four times the number of laps to his closest competitor (1,689 to second-most Heim, 406). In addition to winning the most poles, Gibbs won eight times from the pole and led every lap in three races this year. Gibbs unquestionably earned his ARCA championship.

Gibbs is also running a part-time NASCAR Xfinity Series schedule this year. He already has won four times and is currently 13th in the points, the highest driver outside of the playoffs. Undeniably, Gibbs is immensely talented as well as ready to move up into NASCAR. He reportedly will run the full Xfinity Series schedule next year.

Heim also beat the previous all-time best average finishing position with a finish of 3.1 and still finished in second place. He won six times at superspeedways, a road course, a dirt track, a short track and Pocono Raceway. Heim did not win on a 1.5-mile track this year, but he won the 2020 season finale at Kansas.

Heim already knows his plans for next year, and while he publicly has not stated them, he reportedly will compete in the NASCAR Camping World Truck Series in some capacity.

In two Truck Series starts thus far this year, Heim has not recorded a top-10 finish, but he led two laps and scored 12 stage points in his series debut at Darlington Raceway. Is he ready to move up?

Yes, but Heim would also benefit from continuing to compete in ARCA. He finished inside the top 10 in every ARCA race this season, but the Truck Series competition will be stronger. To further hone his skills, Heim should run some ARCA events next year. His Venturini Motorsports teammate Jesse Love is ineligible to compete on the bigger tracks; perhaps Heim could split a ride with Love next year.

Rev Racing teammates Sanchez and Rajah Caruth both will run the full ARCA schedule next year as well as part-time Xfinity Series slates. Are the two drivers prematurely competing in the Xfinity Series?

Sanchez nabbed 13 top fives in his 18 ARCA starts, though he only led two laps. Ironically, the two laps led were the last two of his victory at Kansas.

Thank you to @Max_Siegel and @NASCARDiversity for their continued support and everything they do. Ecstatic to get everyone on @RevRacin this result, they deserve it! And of course thank you to my family for all they do.
Let’s go!!! pic.twitter.com/LL8wr7wCZ8

Sanchez had four DNFs and his other non-lead lap finish came in the first race at Kansas, where he still managed to finish ninth.

Sanchez repeatedly has talked about running well at the tracks that matter most to his career as he ascends the NASCAR ladder. On tracks between one and two miles in length, Sanchez has one win, two top fives, and four top 10s. He also has one top five and two top 10s in his two road course starts, both at tracks also on the NASCAR circuit.

Heading into next year, Sanchez has attainable goals for both his ARCA season and his Xfinity Series campaign with BJ McLeod Motorsports.

“It gives me a little extra confidence, especially in the ARCA car, ” Sanchez told The Rowdy Maglite Show. “With BJ [McLeod], I’m going to have different expectations. I don’t want to say I cannot win, because anything is possible, but expectation-wise, I’m going to go for a top 15 and attempting a top 10. Whereas with ARCA next year, I’m going to piggyback off Kansas and I’m going to expect to win every race. My team is going to be getting a little bit more support on the manufacturer side so it should make the cars that much faster and make our chances of winning that much greater. I’m really looking forward to next year.”

To prove he belongs in the Xfinity Series, Sanchez first must lead more laps and continue contending for ARCA wins. His goals can be reached and his career trajectory is on the rise.

Caruth also has reasonable expectations for next year. In addition to running the full ARCA schedule, he will drive for Alpha Prime Racing, formerly Martins Motorsports, in the Xfinity Series.

“The goal is to run all the laps and keep learning,” Caruth told Frontstretch about his goals for his 2022 ARCA season. “I would love to be upfront and competitive, but I don’t want to rush anything because I’m very inexperienced compared to the people I’m racing against. Hopefully, that means running up front and leading laps.

“Emphasize the same goals,” he said about running in the Xfinity Series. “I think practice will be like 20 or 30 minutes. Overall, the goals are the same with a side of cautiousness because racing against a larger, more competitive field will take getting used to.”

Caruth finished third in the ARCA Menards Series East standings. In his main ARCA starts, Caruth compiled one top five, a third at Salem Speedway, and four top 10s. His desire to learn hopefully will yield him solid runs next year.

Taylor Gray will run the full East schedule, several main ARCA races and part-time in the Trucks. While he scored two wins in the ARCA Menards Series West this season, Gray has yet to win in the main ARCA series. Gray has an insatiable desire to win races. Because he is running many races in several series, Gray should reward his team owner David Gilliland with a few trophies.

Greg Van Alst ideally wants to run the full ARCA season next year. But he has bigger aspirations as well.

In a team release, @GregVanAlst35 said he's had conversations about racing next year in the @NASCAR_Trucks in addition to competing, ideally full-time as he previously told #WisdomofMark, in @ARCA_Racing.

Van Alst wheeled his No. 35 to a second-place finish at Winchester Speedway, and overall, he achieved three top 10s in eight starts. His two DNFs were at Daytona and Talladega, so Van Alst knows how to keep his car clean. At age 40, Van Alst knows he is not a young hotshot prospect. But keeping the car clean to finish the race is an admirable trait.

Overall, ARCA has seen several champions succeed, and it continues to develop talented youngsters. While Gibbs and Heim combined to win 80% (16 out of 20) ARCA races, there’s talent in the ARCA garage. That talent will soon become the newcomers in NASCAR.

Young Mr. Gibbs is on a roll. But if my grandfather was Joe Gibbs, I be winning ARCA and xFinity races. His team spent more on uniforms that the race budget for many on the grid. He might find the goin’ a bit tougher moving up to the major league. But will have the best of everything to support him. So I’m surely no doubter.

Andy Jankowiac, best driver out there and ran on a shoestring budget.