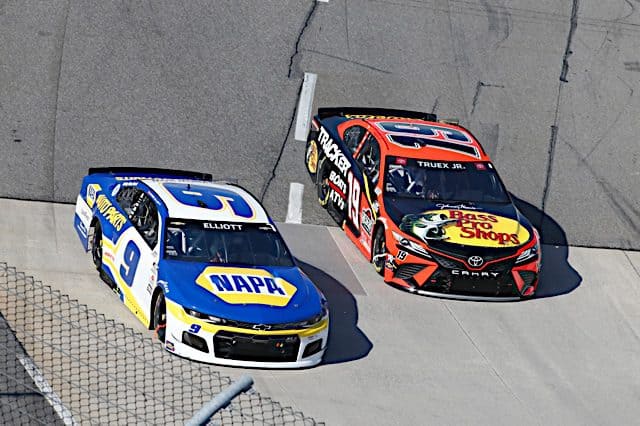 Just two NASCAR Cup Series races are left in the 2021 season, starting with this Sunday (Oct. 31) at Martinsville Speedway. Let’s get your daily fantasy NASCAR DraftKings rosters ready for the Xfinity 500.

Seven drivers will fight for three spots this weekend, as Kyle Larson won the last three races and secured his position in the Championship 4 at Phoenix Raceway. It’s sure to be an interesting event, with many drivers fighting for stage points and others needing a win to lock themselves into the final round. Oh, yeah, it’s also Halloween, so who knows what spooky things will happen on Sunday.

As far as DraftKings strategies go, you’ll likely want multiple drivers who can lead large chunks of laps in your lineup. In the spring race at Martinsville, two drivers led over 100 circuits, though neither one was the winner. In contrast, Martin Truex Jr. dominated the fall 2019 event, leading 464 laps en route to the victory. If you didn’t have him in your lineup then, you were sunk.

It won’t be quite like that this time around, because there are several drivers with strong cars that can get to the front. Expect Truex, Denny Hamlin, Larson and others to be trading the lead off frequently. Just don’t forget about the value plays further down the list that gain positions on the racetrack. Underfunded teams can run well at short tracks; a good mid-pack finish from one of them can be the difference between a big win or just missing the cash line.

Before I move on to this week’s Martinsville picks, here’s the results from Kansas Speedway.

Tyler Reddick had to pit for a flat tire on lap 241 while running around 14th. This issue caught him two laps down, and with no caution in the final 26 laps, he wound up stuck in 22nd. Meanwhile, Hendrick Motorsports continued its strong season as Larson won and William Byron was sixth; both results produced big scores on DraftKings.

Here’s how the drivers score fantasy points on DraftKings. Each fastest lap is worth 0.45 points, while 0.25 points is awarded for each lap led. First place gets 45 points. DraftKings has also put more emphasis on drivers who finish inside the top 10 and top 20. For example, the gap between 10th and 11th is now two points instead of one: 10th gets 34 points, while 11th gets 32, etc.

Truex has shown why this track is called Martinsville, as he’s won three of the last four races there. After his 2019 win, the following year he led over 100 laps in each event, but a loose wheel sent him down pit road late in the fall, ruining his chances of a good finish. He rebounded to another victory earlier this year and secured his sixth top five in the last eight races held here.

The No. 19 Joe Gibbs Racing driver won at two other tracks a mile or less in length — at Phoenix in the spring and Richmond Raceway in the fall. Truex led 64 and 80 laps in each race, respectively. He wasn’t as strong at Bristol Motor Speedway’s night race but still crossed the line in seventh.

Look for Truex to continue to run up front this weekend at the Paperclip.

Elliott broke through for his first victory at Martinsville last fall after leading 236 circuits. His pit crew also avoided a costly penalty in the race when one jumped over the wall too soon. He realized the mistake, returned to the pit wall with both feet and came back to service the No. 9 car. Sometimes, these small details are the difference between winning and losing, both for the driver and your DraftKings contests.

Earlier this spring, Elliott came home second to Truex, earning his fourth top five in the last five Martinsville events. He also finished in the top five at Phoenix, Dover International Speedway and the Richmond fall race, leading 58 laps in the latter en route to fourth. Plus, who could forget about Bristol when he got a tire rub from Kevin Harvick while fighting for the lead? Elliott had to pit and wound up 25th.

Those two seemed to race each other more cleanly last week at Kansas, so they might not get into it this week. But there’s less room to run at Martinsville than a 1.5-mile intermediate, meaning the risk of another on-track run-in is there.

I know Reddick didn’t work out very well last week, but that wasn’t really his fault. He had a good run prior to that, earning four top 10s and six top 15s in the eight races before Kansas. Two of those were a 15th at Richmond and a 12th at Bristol, flexing his team’s muscle on short tracks.

Additionally, Reddick advanced five positions to eighth at the spring Martinsville event and nearly duplicated the performance at Dover (up four spots to eighth). He’s had a strong sophomore season and should once again be in position to have another good finish on Sunday.

These stats do not seem stellar, but remember, DiBenedetto’s only been with Wood Brothers Racing for three Martinsville events. In one of his last races with now-defunct Leavine Family Racing, the California native brought home a 16th-place finish in fall 2019. Last year, he earned a seventh and 10th in June and November, respectively. Then, this spring, he gained 10 spots from his starting position to run 12th.

In fact, DiBenedetto has advanced his position at several short track races in 2021. At Richmond in September, he moved up 10 spots to 18th; the following week, he finished 10th after starting 19th at Bristol. If Matty D can continue this trend on the shorter ovals and move up 10 or so positions, he’ll have a good score on DraftKings.

Briscoe has struggled for much of his rookie campaign, but he’s put together some finishes in the teens over the last couple of months. This steady improvement includes a 16th at Richmond and a 13th in Thunder Valley. Those results produced a position differential of +17 combined.

Though the No. 14 Stewart-Haas Racing pilot ended 27th at Martinsville this year, his recent results indicate Briscoe’s headed for greener pastures as he closes out the season. Is it a risk? Sure. But the freshman’s salary is low, so you can fit several higher-priced drivers in your DraftKings lineup without causing too much harm.

See also
Fire on Fridays: Are We Watching the Last (Cup) Races of Ryan Newman?

Preece has three finishes in the teens at Martinsville: a 16th in spring 2019 and 19th in the fall 2019 and 2020 races. However, what stood out to me was his 32 fastest laps recorded earlier this year at the track before he crashed. That had to have been one of his best cars of the season.

The No. 37 JTG Daugherty Racing driver hasn’t had as good of a year as he would have liked, but he does have four finishes of 19th or better in the past nine races. At Bristol, Preece progressed 10 positions to 17th. Additionally, at Dover in May he ran 18th, seven spots further up from where he began. If Preece is able to finish higher than 20th this Sunday, it would produce a good score for your DraftKings contests.