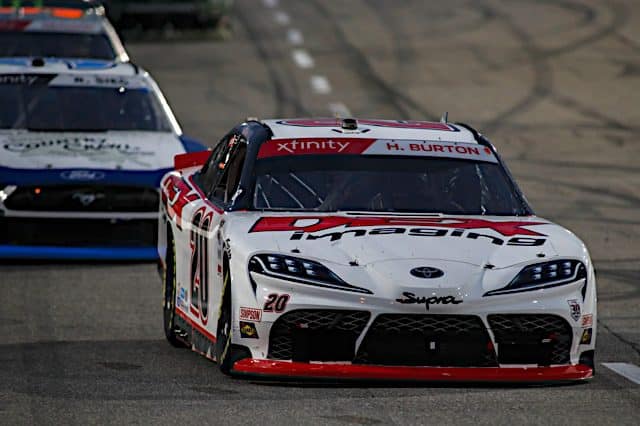 One year ago, Harrison Burton seemed primed to make a NASCAR Xfinity Series championship run in 2021. But instead, on Saturday night (Oct. 30), his 2021 playoff run came to an end.

Burton ended the 2020 season by winning back-to-back races, at Texas Motor Speedway and Martinsville Speedway. He wasn’t eligible for the Championship 4 at the time, but it was a huge boost of momentum to end the season. Fast forward one year, and Burton hasn’t been back to victory lane, and finishes of 20th or worse at Texas and Martinsville had him miss the Championship 4 by 73 points.

But it wasn’t a lack of speed that thwarted Burton’s Round of 8. It was a lack of luck.

“Last year, I felt like I won races where I wasn’t the fastest guy,” Burton said. “This year, I haven’t won anything, obviously, but also have been the fastest guy multiple times and just haven’t had it work out.”

Burton said he had the speed to win both of the last two races but ended up wrecked instead.

At Texas last week, the 21-year-old was battling for a top five when Sam Mayer turned him into Noah Gragson, destroying both cars. This left Burton in a must-win situation in order to advance.

At Martinsville, Burton showed plenty of speed early, finishing stage two in second place. It seemed like the race would come down between Burton and Gragson, who eventually won, until a pit strategy gambit by Spencer Boyd started his eventual demise.

Boyd kept his No. 52 on the racetrack when the rest of the lead-lap cars pitted during a lap 180 caution. Burton restarted to Boyd’s outside, while Gragson restarted behind the No. 52 in third. After getting a huge launch on the restart, Gragson dove underneath Boyd and forced the No. 52 up into Burton, who lost several spots.

“I feel like when the [No.] 52 stayed out, that really hurt us,” Burton said. “We lost a lot of track position. Just got put three-wide on top at Martinsville, you’re gonna lose spots, right? That was really frustrating for me. I feel like that happens a lot in this series, and it tends to hurt a lot of fast guys. I’ve been hurt by it twice this year in races I thought I had a chance to win.”

Burton was frustrated with Boyd’s decision to stay out on old tires and a slower car, but he was understanding of the Jimmy Means Racing team doing what it had to do.

“I get it, right? I don’t know their situation. I get that they’re trying to do what they have to do to get the best finishes they can,” Burton said. “But also it tore up their car. … I don’t know what the right thing to do is there. I’ve never been in that position.

“So it’s hard for me to come down and say that they’re doing something wrong and they’re dumb and this and that. But in the moment, yeah, it seemed frustrating that they would stay out and kind of put themselves in that position.”

As Burton was starting to work his way back toward the front, Gragson spun Ty Gibbs from the lead. The No. 54 stopped directly in front of Burton’s path, and the two cars collided.

“I wish I had just could’ve reacted faster,” Burton said. “I just couldn’t miss it. It’s frustrating. It’s crazy how Martinsville, if you’re not running where we were all night, where we were up front. As soon as you lose it, things can go sideways. And it’s kind of just what happened to us.”

The No. 20 crew made repairs and got Burton back on the track, but the car later shed debris that brought out a caution. The final straw of bad luck to end Burton’s playoff run came when he took the jack with him off of pit road, resulting in a penalty that dropped him to the rear.

“That’s what makes racing so hard, right? Especially a situation like these playoffs,” Burton said. “You have to execute, and you have to have things go your way.”

Burton has one last chance, next week at Phoenix Raceway, to win his fifth career Xfinity win for Joe Gibbs Racing. Next year, he moves up to the NASCAR Cup Series to drive the No. 21 for Wood Brothers Racing.

“It’d be awesome for our team [to win Phoenix],” Burton said. “We’ve had a rough year, so no hiding that. Last year was a great year for me. And this year is not. So it’s time to get back to winning. It’s time to go get dirty, I guess.”

The cameras knew Kim Burton was on the pit box but failed to show her during the race. There had to be some pretty good emotional reactions from her when viewing her son’s problems.