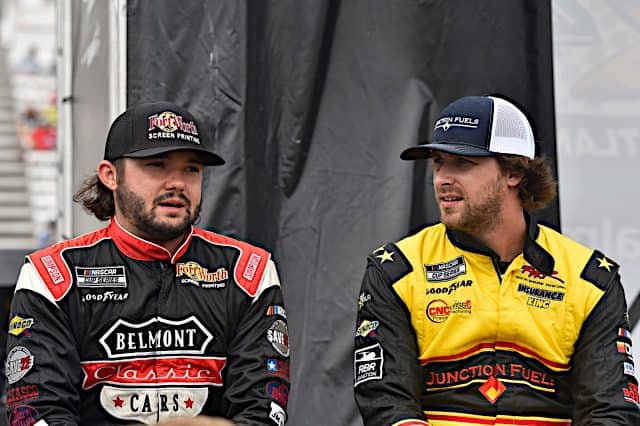 When one sees the name Rick Ware Racing, it’s at times met with some sort of annoyance, or at least not taken seriously. It’s a team that has frustrated fans, drivers and even broadcasters in the booth — and is one that occasionally spawns its own meme, “Rick Ware Racing Moment,” on social media.

All of that usually stems from the team standing out during NASCAR Cup Series races with slow cars that, whether the fault of its own drivers or just mechanical failures, impede a huge moment in the race and possibly the championship by bringing out cautions at crucial moments.

But make no mistake: though it’s sometimes the butt of the joke on Sundays, Rick Ware Racing is altogether good for NASCAR.

There have been allegations RWR, with its four-car Cup fleet, is playing the system NASCAR has in place via the charter system to spend minimally and profit from the purses. But the organization is much more than that. In fact, when you’re involved in various disciplines, the name and brand become recognizable; Chip Ganassi Racing and Team Penske are great examples of teams that do this, and RWR is no exception.

See also
2 Burning Questions: What Is The State Of NASCAR?

That’s right — you won’t just find RWR in the Cup or Xfinity series in NASCAR. For example, the team fields two cars in the NASCAR Pinty’s Series Series in Canada, with Andrew Ranger and Alex Guenette driving the Nos. 51 and 52 cars, respectively. Ranger even made RWR a winning team in NASCAR for the first time this year, delivering the victory at Flamboro Speedway, the icing on the cake of a second-place finish in the championship standings.

Outside stock cars, the team has also branched out into the NTT IndyCar Series in a partnership with Dale Coyne Racing. Starting with a one-off run in the 2020 Indianapolis 500 with James Davison, RWR and Coyne moved to a full-time operation, the No. 51, in 2o21, plus a part-time No. 52. In 2021 alone, driver Romain Grosjean won three podiums, two coming at Indianapolis Motor Speedway, and nabbed a runner-up at Laguna Seca. It’s worth noting that despite running a limited schedule, Grosjean performed so well he still almost won the Rookie of the Year award. Not bad for a team just getting its footing in the series.

Elsewhere, in 2019, the team finished fifth overall and won the LMP2 AM Trophy class in the Asian Le Mans Series at The Bend Motorsport Speedway. Cup driver Cody Ware and 16-year-old Gustas Grinbergas were the drivers, Grinbergas being the youngest driver to ever win. That year, the team began to compete in the IMSA WeatherTech SportsCar Championship.

A team like RWR gaining a following worldwide — via racing dispositions that compete around the world, not just in the United States — helps put more eyes on NASCAR, which can’t be viewed as a negative. RWR’s presence in these other series can help drive attention to NASCAR that might not have otherwise existed.

And then there are its drivers. In NASCAR, no other team recently has given more drivers from different backgrounds a chance to compete and drive in the Cup Series than RWR. Where most Cup teams have their set drivers contracted for a set number of years, RWR tends to have open seats for some races because the other drivers are racing elsewhere. Sure enough, only two of its cars (the Nos. 51 and 52) featured full-time competitors (Ware and Josh Bilicki) in Cup in 2021, and even Ware stepped out of the car here and there in order to drive in IndyCar.

One of its more interesting signings the last few years is Davison, an Australian who competes in various sporting car events, and has also delivered some iRacing wins for the team in the NASCAR Pro Invitational.

Others who have experience in other disciplines include Ryan Ellis, RC Enerson and Chris Windom. These drivers bring in their fans and put eyes onto the sport who may have not watched or cared beforehand.

Sometimes these drivers come to RWR via the sponsorship dollars they can muster. But RWR also boasts its own funding, as one of its most recognizable partners, Nurtec ODT, sponsors its cars in IndyCar, Pinty’s, Cup and IMSA.

Following the team on social media showcases weekly announcements of a partner coming on board for a race or two, at times having some of the best-looking cars. Whether the team is performing well in a given race and garnering positive TV attention or not, fans will see these cars and brands, and that’s a major plus for the brand awareness these sponsors often covet.

An RWR partner team in the Xfinity Series, SS Green Light Racing, fields Joe Graf Jr. in the No. 07. The 2021 spring Atlanta Motor Speedway date saw rapper Lil Aaron sponsor Graf’s car with his brand, Hazheart.com. His interested fans paid attention to the deal, bringing NASCAR to groups of people who would not usually care.

See also
Friday Faceoff: Does an Underperforming Team Deserve to Lose Its Charter?

All of the above indicates that Rick Ware Racing is good for NASCAR. While the team is aiming to be competitive in the Cup Series for 2022 with its newly announced Stewart-Haas Racing partnership, RWR is much more than a backmarker team. It is involved in almost every form of motorsport, and brings new faces and drivers into the sport who have various skill sets. It’s among the only teams that gives these drivers a chance in an often already-funded ride to gain experience, learn the sport and potentially move up.

Though he wasn’t racing with RWR, Alex Bowman did just this when he filled in for Dale Earnhardt Jr. in 2016 while he was injured; previously, Bowman raced for BK Racing and Tommy Baldwin Racing, teams that often languished in the same positions in the running order as RWR does today. He is now a threat every week at Hendrick Motorsports.

The next Jimmie Johnson or Kyle Larson very well could be the driver in an RWR car this week. Keep an eye out; though the team may not be a contender most weeks, organizations like these can be a springboard to future success — and it’s good that the sport has them.

Rick Ware has done a great job of getting more than just a foot in the door in multiple series as you ably note. He has started from the ground up and it takes awhile to build up sufficient capital to compete for wins. But Rick Ware gambled on rising prices of charters at a time when they were cheap and interest in Nascar was low. He has met the criteria required to keep his charters. Because of how he has carefully managed funds, the team is now able to take a next step. I hope he has success with the new car and silences his critics.

I might be one of the few who actually follow these underfunded, backmarker teams, because they have to race the way I always did. Sad to see the 00 team going away, but happy to see RWR forming an alliance to make the team stronger going forward.

Professional field fillers are not sexy or good for our sport. It is a money grab and this article attempts to somehow romanticize “back markers”. The evolution of “start-and-parks”.