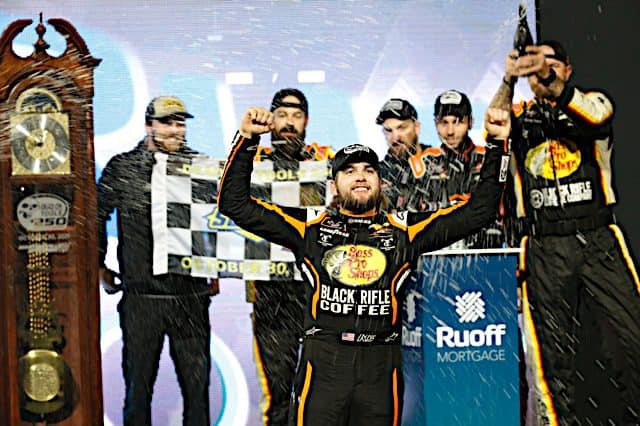 Noah Gragson had to win to advance to the Championship 4 Saturday night (Oct. 30) at Martinsville Speedway, and was willing to do anything to win the Dead On Tools 250. After driving and willing his way to the lead, he faced challenges from Daniel Hemric passing him late and battled to retake the lead in two overtimes, holding off a hard-charging Austin Cindric in the second to win at the oldest venue in NASCAR.

“I want to cry right now, Marty,” Gragson said to NBC Sports’ Marty Snider after the race. “It’s been a rough season; we got a couple wins there at Darlington and Richmond but it wasn’t looking good last weekend [at Kansas]. I told my guys that we got an opportunity and we’re still in it. I’m so thankful.”

The other drivers who advanced to the Championship 4 were Cindric, Hemric and AJ Allmendinger.

Cindric finished second in the race after locking himself in the final round after stage two. Hemric ended up third, and Sam Mayer finished in fourth after being spun out earlier in the race. Justin Allgaier was one of the drivers eliminated after coming home fifth and needing a win or Gragson to lose.

Cindric led the field to the green in stage one. After a brief battle with Ty Gibbs, he stayed out front the rest of the way and got the stage win despite being pursued by Allmendinger. The first stage only had two cautions, one for Preston Pardus, who got loose under Ryan Vargas, and another that was more serious when Mayer was battling Gibbs and they got together, cutting down Mayer’s tire.

During the stage break, Gragson stayed out on the track to capture the lead, needing to fight to make the Championship 4. Gragson led the field to green with Gibbs on the outside battling him. Needing a win of his own to advance, Harrison Burton drove up to Gibbs and captured second when Gibbs had a wheel lock and moved up the track. From there, Burton pursued Gragson and the battle for the second stage win came down to the final turn, with Gragson prevailing.

After stage two, Cindric and Allmendinger had locked themselves in the final four, leaving only two open positions. Playoff contender Justin Haley had issues as his rear brakes were on fire, all but taking him out of the championship race.

Haley did come back out from the garage, though 22 laps down. With 100 laps to go, Bayley Currey brought out the caution due to a flat tire, bunching up the contenders once again with Gragson driving away at the restart. Gibbs began lurking close to Gragson until 71 laps to go when Ryan Ellis spun around, bringing out another caution. During the pit stop sequence, Gragson lost two positions due to being blocked in by Jeffrey Earnhardt. Gibbs led them to green, and it didn’t take Gragson long to go three-wide to capture second. Ryan Sieg wheel hopped and put Myatt Snider in the wall to bring out another caution, and after the field went green, a massive pile-up occurred coming out of turn 2 with 57 laps to go, eventually bringing out the red flag.

When the race went green again, Gragson turned Gibbs while racing for the lead.

Hemric was able to get close to Gragson and pass him with 17 laps to go. With just 10 laps remaining, Haley spun around to bring out the caution due to a right front being down, giving Gragson another shot to get the win in overtime. Gragson took the lead right before another caution came out and just missed taking the white flag to win it. In the second overtime, Gragson was able to hold off Cindric to win the race, locking him into the Championship 4.

The Xfinity championship race at Phoenix will air on Nov. 6 at 8:30 p.m. ET on NBC Sports Network.

I grade the race a “B”. There was some pretty good racing, as is usually the case at Martinsville. I’m not a Noah Gragson fan, but he has shown some maturity this season, and some humility after such a challenging season for the #9 team. And he raced his competitors clean.

While I’m a Dinger fan, if he doesn’t win next week I’ll be pulling for Hemric. Imagine the story if he wins his first race AND the championship in the same race.

Hey Jeff Burton… it’s okay to pull for your son, but scale it back some. You’re supposed to be somewhat impartial.

Good points all, I agree.

I thought the race was pretty good as well. Maybe a few too many cautions. Of course Martinsville is my favorite track (Dalrington a close second).
I don’t like Gragson at all (based on some of his past actions) but I could appreciate and cheer his win given the fact that he didn’t resort to underhanded tactics to win. I thought he raced cleanly as things go at Martinsville and won fairly. I really don’t care who wins but if I had to pick one to root for it would be Cindric. However, if Hemric could win the championship by finishing ahead of the other three without winning the race, then how could I resist pulling for Hemric? That would be my ultimate wish for any of the champions in any of the series, winning the championship without winning a race during the season.

I’m pulling for Hemric to finish 2nd and win the championship too ?