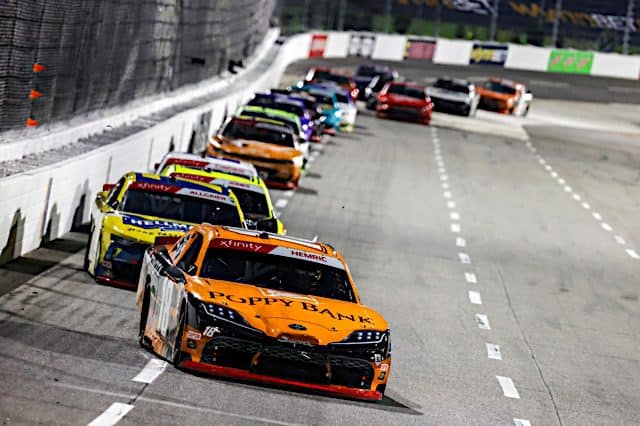 Austin Cindric and AJ Allmendinger each entered Saturday’s (Oct. 30) NASCAR Xfinity Series race at Martinsville Speedway 47 points above the cutline. Race smart and complete all the laps meant they were likely racing for a championship next weekend. After stage two, both received the notification they were locked in the Championship 4 race at Phoenix Raceway (Nov. 6).

Harrison Burton and Brandon Jones weren’t mathematically in must-win situations, but after stage one, both were too many points out of the top four and had to win.

Noah Gragson collected 14 stage points, including a victory in stage two after starting the race 24 points behind fourth place. He raced with the mentality that a win was the only thing that mattered.

When the checkered flag flew over the Dead on Tools 250, Allgaier was left disappointed that he wasn’t making another appearance in the Championship 4 race. Despite advancing to the championship race, Hemric was left speechless that another win was stripped away by nothing of his own doing, again. And Gragson shotgunned a beer in front of the fans after edging 2020 Xfinity champion Cindric by 64 thousandths of a second, the closest finish Xfinity finish at Martinsville.

Hemric is moving on to the Championship 4 race at Phoenix Raceway. Period. He has contested the full Xfinity season three times, and he has reached the Championship 4 race each season. Hemric hasn’t won a race in any of NASCAR’s three national divisions, but to be three-for-three reaching the season’s final race with a chance to win the season-long prize is impressive. It takes luck, but it also takes talent.

Hemric has put himself in a position to win several times this season, but on Saturday, a caution with eight laps to go once again thwarted his efforts to win. Haley had struggled all race long with brake issues, even spending time behind the wall for repairs. He wheel hopped his car and drifted around turns 3 and 4 and eventually spun around. NASCAR race control displayed the caution, something Hemric, who was driving away from second-place Gragson, didn’t want to see.

Gragson likely redeemed himself in the eyes of some when he chose to restart on the front row alongside Hemric. The old Gragson would have elected to restart on the inside behind Hemric and move him out of the way. Gragson was in a must-win situation if he wanted to keep his championship hopes alive; Hemric was not. On the lap 249 restart, Gragson battled Hemric hard and was a nose ahead through turns 3 and 4 when the caution came out yet again.

Gragson picked the inside once again on what proved to be the final restart of the race. Hemric chose the inside. Hemric played it safe, raced Gragson clean, and had a difficult time from a slightly too-aggressive Sam Mayer. Gragson won, and Hemric finished third.

Both Hemric and Gragson are moving on. For Hemric, it’s further justification for him racing on the highest levels of NASCAR despite not having a victory. For Gragson, it’s progress in his maturity as a race car driver.

For as long as NASCAR decides a champion with a playoff-style points format, there will be a debate on the etiquette of non-playoff drivers racing playoff drivers. Don’t get me wrong: I like the playoff system. It makes every race count. But for non-playoff drivers, there comes the point where common sense must prevail. That point also differs from team to team.

Spencer Boyd had every right to restart on the front row on lap 185. He did not pit when the rest of the lead lap cars did. He kept cars at least one lap down by staying out, trapped at least one lap down. They couldn’t earn a lap back by receiving the waive-around. It was a strategic move by the No. 52 Jimmy Means Racing team. In the Xfinity Series, there are multiple races within a race, and keeping some cars trapped a lap down heightened the opportunity for Boyd to finish ahead of them in the race and capture more points.

Boyd never stood a chance to retain the lead. Speed, not to mention his old tires, meant he would never lead a green flag lap. What was the team hoping for? A quick caution, and it got it. One lap after the restart, Ryan Sieg wheel hopped entering turn 1, hit Myatt Snider and sent him into the wall.

Now, Boyd’s lackluster restart had already thrown a major wrench into Harrison Burton’s championship hopes, considering he was in a must-win situation. Burton was outside three-wide on the restart, with Boyd in the middle entering turn 1. Burton’s tires collected marbles as he was too high through the corner and dropped back to ninth.

The Means team made a poor decision when it did not pit during the immediate caution. The leaders weren’t going to pit again, and therefore, no one was going to get the wave-around from NASCAR. Instead, the team elected to keep Boyd out and restart sixth. Boyd drifted high as Jeb Burton was on his bumper, and Riley Herbst filled the gap created between Jeb Burton and Michael Annett on the inside — effectively meaning they were four-wide.

The funnel effect exiting turn 2 had Jeb Burton pinch Herbst into Annett, who was turned right … and into Boyd. The crash ended Burton and Annett’s days. It was an unnecessary caution that ultimately led the next caution to take place immediately — Cindric bumping Gragson, Gragson bumping Ty Gibbs and Gibbs spinning. Oh, and by the way, Harrison Burton hit a sideways Gibbs with his left front, leaving him with heavy damage.

Brake checking is a dirty move, especially when it’s so aggressive that the guy you’re brake checking runs into you. On lap 46, Gibbs brake checked ARCA Menards Series rival Mayer. The two do not get along, and before 20% of the race was completed, Gibbs had already had enough of Mayer.

Mayer would go on to finish fourth but was missing the right front bumper of his car. If Mayer had run into the back of Gibbs just a few inches to the right, it could have punctured the radiator of Mayer’s car, ending his day.

I’m in no way opposed to hard, rubbing-fenders racing that is fair and clean. But brake checking? Leave that in ARCA and in video games. The Gibbs-Mayer rivalry will be something to watch next season. No one wants to see repeated senseless confrontations between these two, and that is the category that brake checking falls under. Hopefully the Gibbs-Mayer rivalry will blossom into a more sophisticated one, if there ever was such a rivalry in racing.

Landon Cassill and Alex Labbe get co-Underdog Performances of the Race this week. Cassill matched a season-best finish of 12th, which he previously achieved at Darlington Raceway in May and on the Daytona International Speedway road course back in February.

Labbe earned his third top 10 of the season and his best finish of the year: eighth. He had found himself flirting the top 10 for the better part of the final 50 laps of the race, and survived the late-race mayhem. The eighth-place finish is Labbe’s 10th career top-10 finish in the Xfinity Series. Despite being known for his road course driving, all three of his top 10s in 2021 have come at ovals — two at Darlington and Saturday night at Martinsville.

“The law of averages says you’ve been in it the last so many years (four of the last five), at some point you’re going to have to have a bad year. By bad, I mean fifth, going into the final round.” – Justin Allgaier

“I wanted to choose the top to race the nine (Gragson)… Kinda risk vs. reward there, right? [We] start the season out with one goal, and that’s to try to do what we officially have a shot to do next week, and that’s run for a championship. That is the ultimate goal.” – Daniel Hemric

When the NASCAR Xfinity Series rolls into Phoenix, eight months, 24 days and 32 races will have passed since the season-opening race at Daytona. Gragson makes his first ever appearance in the Championship 4 race, riding a wave of jubilation. Hemric makes his third appearance in the Championship 4 race, arguably in the best situation for him yet. Allmendinger and Cindric, the season’s two most consistent threats for victories, make up the final two spots.

As far as full-time drivers go, these are the four best drivers, if not four of the five best full-time drivers when counting Allgaier. It isn’t easy to pick a championship favorite. What is at the very least guaranteed is the possibility of a battle between Allmendinger and Cindric.

This is the battle many, including myself, wanted to see. Since the pair tangled in the season’s second race on the road course at Daytona, both have been in a season-long gentleman’s rivalry. At times, Cindric has appeared to have the upper hand. But the late summer charge by Allmendinger and ultimate victory at Bristol, securing him the regular-season championship, made him look like the championship favorite.

Cindric has not won since the Indianapolis Motor Speedway road course back on Aug. 14. Sound familiar? Entering last season’s Championship 4 race, Cindric hadn’t won since Aug. 15 at Daytona’s road course. Aside from Allmendinger’s victory on the Charlotte Motor Speedway ROVAL, both have had relatively quiet playoffs. Are they still the drivers to beat? Yes. Each has five victories, and a sixth makes them the 2021 Xfinity champion.

I lauded the Allmendinger-Cindric rivalry as something to watch throughout the playoffs following Bristol Motor Speedway. The playoffs may have been lackluster for these two, but now, an entire season’s worth of exhausting work is on the line. The championship will come down between these two, and if the pair are one-two in the final laps, they won’t disappoint.

The NASCAR Xfinity Series Championship race is Saturday, Nov. 6, at Phoenix Raceway. Race coverage of the 200-lap race begins at 8:30 p.m. ET on NBC Sports Network and MRN. Cindric looks to become the 10th two-time series champion and eighth to win back-to-back. Allmendinger seeks his first major racing championship, along with Hemric and Gragson, who will fight for their first national NASCAR championships.