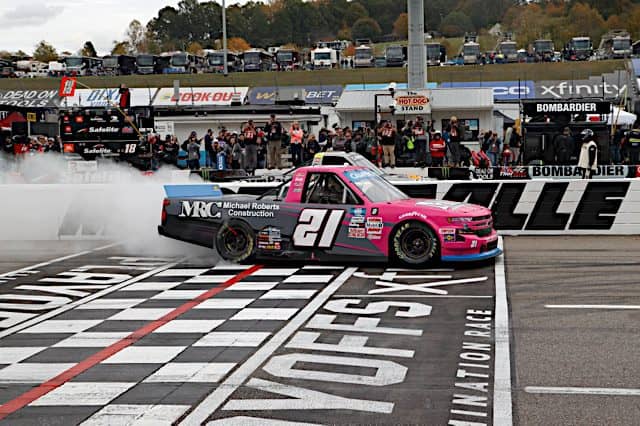 Zane Smith had to win to make it into the NASCAR Camping World Truck Series’ Championship 4, and he did just that in the United Rentals 200 at Martinsville Speedway Oct. 30.

The No. 38 of Todd Gilliland was the dominant truck, winning the first two stages and battling at the end between Smith and Stewart Friesen, who also had to win to make it. A three-wide battle in overtime took out Gilliland, and Smith clinched the win at the white flag as the caution flew, after Gilliland was wrecked in front of the field.

“I did not want Todd in front of me, I got shoved from being by the 16 so it wasn’t all me,” Smith said post-race.  “I’m looking for a job; right now I have nothing.  I haven’t been able to sleep right since last year, and I’ll do whatever it takes to win the damn thing.”

Rhodes, Crafton, John Hunter Nemechek and Zane Smith will battle for the championship next week at Phoenix Raceway.

Gilliland, after winning the first two stages and battling for the lead in the waning laps, was relegated to 25th after his race-ending crash.

In all, a record number of cautions in a Truck playoff race — 14 — flew on the day.  While many were for single-truck spins, a major pile-up on the frontstretch led to many damaged trucks after going green toward the end of stage two.

Big problems on the frontstretch take us to caution in the #UnitedRentals200! pic.twitter.com/LHoyubmRqE

One of the biggest moments of the race occurred on lap 132, when championship contender Nemechek made contact with Austin Wayne Self, who wasn’t happy and then hooked him into the wall in the next turn. In a post-wreck interview following his trip to the infield care center, Nemechek said Self “shouldn’t be out here.”

How in the world did @Matt_Crafton keep his truck rolling and his #NASCARPlayoffs alive? pic.twitter.com/HxStTsdvd3

The Truck Series runs its final event of 2021 Friday, Nov. 5, at Phoenix. The race is scheduled for an 8 p.m. ET start time on FOX Sports 1.