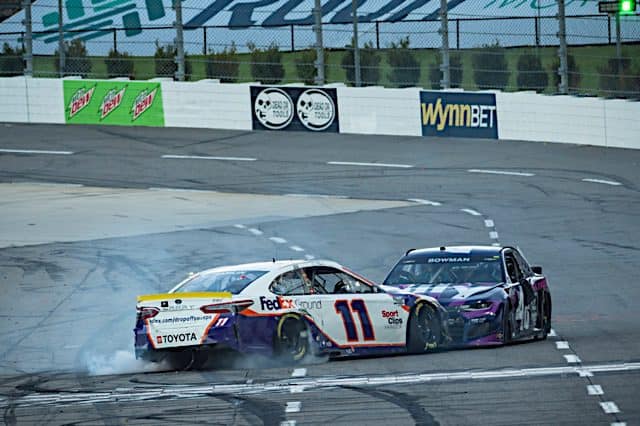 On Halloween afternoon at Martinsville Speedway, Alex Bowman bumped Denny Hamlin late in the race to set up an overtime restart and his fourth win of the season in the NASCAR Cup Series.

Spooky vibes didn’t pervade the Xfinity 500 Sunday (Oct. 31) until late, when cautions started flying faster than the cars were running and desperation sank in for several of the playoff drivers.

Alex Bowman gets into him and a restart is coming! #NASCARPlayoffs x @peacockTV x @NBC pic.twitter.com/6EM9BLE8p2

“I just got loose in,” Bowman said of the contact. “I got in too deep, knocked him out of the way and literally let him have the lead back. For anybody that wants to think I was trying to crash him, [it] obviously wasn’t the case, considering I literally gave up the lead […] He’s crashed guys here for wins. I hate doing it. Obviously I don’t want to crash somebody. I just got in, got underneath him, spun him out.

“We get a free grandfather clock, which is pretty special,” he added. “I struggled here for a long time. I was trying to get the flag, do a backwards victory lap. Mark Martin thinks that’s cool. Mark Martin is my hero […] Cool to do it again.”

Hamlin, unhappy with the contact, drove into Bowman’s burnout on the frontstretch, nosing up to the No. 48 to express his frustration before eventually driving away.

“I’m not trying to drive underneath there and crash the guy,” Bowman said. “I got under him fair, under him clean. I just got sideways underneath him, spun him out. Hate to do that. Obviously unintentional. Part of short-track racing.

“I wasn’t going to get into it,” he said of Hamlin’s cameo during the burnout. “This isn’t Bowman Gray Stadium, this is the Cup Series. […] One of those deals.”

Hamlin, Kyle Larson, Chase Elliott and Martin Truex Jr. ended up the four locked in for championship racing once the checkered flag flew, meaning two Hendrick Motorsports and two Joe Gibbs Racing cars are set to compete for a title at Phoenix Raceway.

Hamlin, 32 points to the good heading to Martinsville, was forced to start at the back after failing inspection twice prior to the race. Larson, meanwhile, rolled off on pole with Hendrick Motorsports teammate Elliott beside him, out front for 56 laps until the No. 9 scooted by.

Elliott was leading at the lap 60 competition caution, nearly passing Hamlin to put the No. 11 a lap down prior to the yellow. Hamlin barely avoided another disaster when Ryan Newman spun on the exit of turn 4, coming dangerously close to being sandwiched into the wall.

Larson grabbed the lead after the competition caution’s ensuing round of pit stops but lost it again to Elliott shortly after the green flag flew. It was a mostly quiet rest of stage one, with few incidents marring the rest of the way to lap 130.

That was, except for Austin Dillon, whose bad day was just beginning. Dillon and Blaney were fighting for position inside the top 10 just before lap 100, contact was made and Blaney suffered significant damage to his left rear, impacting his . Dillon also got damage, but he seemed to recover for the time being.

Blaney, meanwhile, joined Hamlin as the only two playoff drivers not to score stage points in the opening segment.

Larson was hit with a pit road penalty after the stops that followed stage one but quickly made his way back up through the field as another caution flew. This was another incident involving Dillon, who had a right-front tire go down and smacked the wall. Truex claimed the lead after stops were completed.

Elliott got by the No. 19 and cruised away to win an uneventful stage two, securing a spot in the Championship 4 in the process. Larson, Blaney and Logano failed to score points, while Kyle Busch ended up flagged for speeding on pit road.

Hamlin made his way up to second, recovering after nearly going a lap down earlier, but Bowman found his way by to run second to Elliott.

A few tempers flared, with Justin Haley shoving Josh Bilicki into the corner and Quin Houff spinning the No. 52 under caution, something for which NASCAR parked the No. 00 five laps.

Another caution waved for another Newman spin, which came off the bumper of Cole Custer. Newman skidded down the track, damaging Ross Chastain‘s No. 42, before going back up into the outside wall.

Logano stayed out to take the lead but Elliott took it back. This all happened in front of Truex, who appeared to think the No. 19 was starting to overheat.

Two more cautions later, one for another Dillon spin, hard racing with Keselowski sent Elliott spinning to draw another yellow.

Elliott then got damage in the next incident, which also involved Bubba Wallace and Ricky Stenhouse Jr.

Truex then had issues of his own, with some damage inflicted on the right-front fender of the No. 19 sending smoke billowing from the wheel well. Truex seemed to recover but started falling back, battling with Joe Gibbs Racing teammate Kyle Busch before dropping several more spots.

Busch and Truex flip-flopped around the cutoff most of the back end of the race, but things took a turn for Truex when he slammed the outside wall on the backstretch. The contact dropped the No. 19 below the points line … at least for a while.

On the restart, Bowman and Hamlin fought for the lead and effectively checked out, but a spin for Ryan Preece re-racked the field.

That battle ended when Bowman spun Hamlin in turn 4, setting up an overtime finish, and Bowman held off must-win drivers Keselowski and Kyle Busch to claim his fourth win of the season.

Denny Hamlin was NOT HAVING IT.

Hamlin then drove up to Bowman’s car during the celebration and vented on pit road.

“He’s just a hack,” Hamlin said. “Just an absolute hack. He gets his ass kicked by his teammates every week, [he’s] just fucking terrible. He’s just terrible, and he sees one opportunity and he takes it […] he’s got a fast car every week and he runs 10th.

“He didn’t want to race us there, we had a good, clean race. I was high as I could on the racetrack to give him all the room I could, and he still can’t drive.”

Hear from @DennyHamlin after he was spun by eventual race winner Alex Bowman. #NASCARPlayoffs pic.twitter.com/R0N3lSu9Dk

The championship will be decided on Sunday, Nov. 7 at Phoenix Raceway. Coverage is scheduled for 3 p.m. on NBC.

Poor Denny. Maybe Bowman can push you back in the championship race. Choke time—again ?

Everyone knows I always wish for someone to do that to Denny, and while I am no Bowman fan, I didn’t think it was a totally blatant spin. More like I am going into this corner and I am not backing down, then ooops. Denny has every right to be PO’ed but I’ve seen so much worse through the years and a couple of times it was Denny himself guilty.

Mmm, videos of 3 years ago Denny spinning Chase out, only on purpose.

And wrecked him to boot!

NASCAR needs to penalize Hamlin the same way Quin Houff was penalized for hitting a car under caution earlier in the race — a 5 lap penalty at the start of next week’s race. His actions were not that of a champion.

I’d love it, but no way Nascar does that. To keep their precious championship race intact, a monetary fine is the worst I expect. It would be funny though, hey Denny, you have to sit in your pit the first 5 laps lololol Another Hamlin choke.

Bowman, the so called hack by Hamlin, has now won twice as many races this year than Denny. Funny that Hamlin’s home state crowd let him know exactly how they felt about him.

As much as hate seeing no Fords in the Championship hunt next weekend, the right cars are in the final four. I’ll be pulling for Larson, and then anyone but Hamlin.

I like Bowman, and four wins this season with a race to go is not the result of a “hack”. Only teammate Larson has more wins. Defending champion Elliott has two, and Bowman’s other teammate Byron has just one. Hamlin is feeling the pressure. The choking has begun.

16 HMS wins this year. At least Denny beat Bubba today, by one spot.

Awwwww Denny loses at his home track, your lucky you were not racing Earnhardt or you would have been history 4 laps earlier,,

Just like the NBA, the last two minutes settled the event. Hamlin has used the bumper to win numerous times. This time Bowman used the fender. Hamlin complaining about the finish is the pot calling the kettle black. Sorry Bubba, It’s an expression.

Great job Alex. I think because Bowman is so passive in his personality, it irked Denise even more. What goes around comes around.