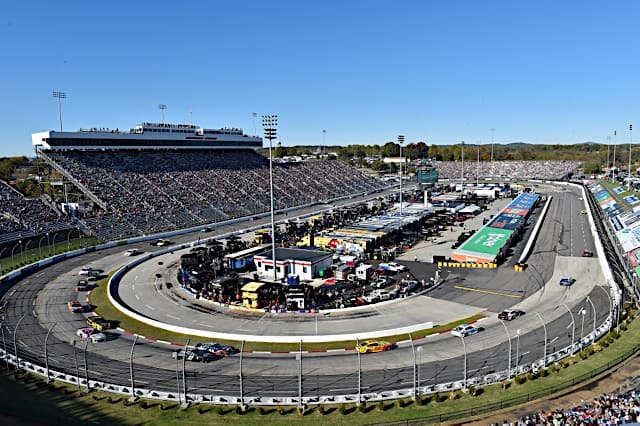 The penultimate race of the 2021 NASCAR Cup Series at Martinsville Speedway is upon us, and pretty much everything is still up in the air.

Kyle Larson has won three straight races, including sweeping both events in the Round of 8 thus far at Texas Motor Speedway and Kansas Speedway. He’s led a combined 386 of 601 laps between the two races, currently about 100 shy of 2,500 circuits led on the season.

Larson’s the only driver locked in for the Championship 4 at Phoenix. Chase Elliott is 34 points above the cutline with Denny Hamlin 32 to the good, while Kyle Busch is the other driver currently safe — he’s just one point in the clear. Ryan Blaney sits one point below the cutline, while Martin Truex Jr. trails by three, Brad Keselowski by six and Joey Logano by 26.

Hamlin recovered from multiple incidents at Texas to finish 11th, adding a top-five effort at Kansas to put himself in position to clinch a spot on points alone. Truex and Logano’s miserable days in the Lone Star State, where the latter suffered a blown engine, gave way to both recording top-10 finishes at Kansas to soften their cushions, though Logano is still effectively in a must-win situation on Sunday.

Larson rolls off on pole at the 0.526-mile speedway with his Hendrick Motorsports stablemate Elliott alongside, while Hamlin, Truex and Logano round out the top five. Keselowski, Kyle Busch, Blaney, Kevin Harvick and Kurt Busch fill in the rest of the top 10.

Hamlin, though, failed to pass inspection each of the first two times through. The No. 11 will start at the rear after being tagged for body and rear alignment issues on the first and second times, respectively, and was the only car to fail twice. It also means that William Byron moves into the top 10 of the starting lineup, where the No. 24 will take the green flag from 10th.

Hamlin good on third time. He is only driver to the rear for 2x tech failure. Body issue on first failure. Rear alignment on second failure. pic.twitter.com/8y0rccP2u4

History favors Truex at Martinsville; he’s won three of the past four races, leading 616 of 1,500 total laps across that trio of victories. He led 129 circuits in the fall 2020 race, but late issues sent him to pit road and plummeting down the running order.

Hamlin leads all drivers with five total wins at the paperclip, including three straight that bridged the turn of the decade between 2009 and 2010. Truex follows with three; Kurt Busch, Kyle Busch and Keselowski with two apiece; and Logano, Elliott, Harvick and Ryan Newman each have one.

Elliott’s win came in last year’s playoff event, a clutch move that landed him in the Championship 4, where he secured the title one week later at Phoenix. He and Logano are also the only two drivers to finish in the top 10 at Martinsville each of the past three races at the track.

Of note as well is Blaney, who sits one point below the cutline but has a solid history at Martinsville: He’s accounted for top-10 finishes in six of the last eight races, including a streak of results fifth or better through the four races between 2019 and 2020. That run included back-to-back runner-up finishes in 2020’s dual races, and he led 157 laps in the spring 2021 race but fell to 11th by race’s end.

Outside of Cup, the Camping World Truck and Xfinity series held their respective cutoff races on Saturday (Oct. 30).

In the early afternoon, Zane Smith emerged victorious after Stewart Friesen spun Todd Gilliland coming to the white flag in overtime, claiming a spot in the Championship 4 after a chaotic race. Smith joined John Hunter Nemechek, Ben Rhodes and Matt Crafton among the four playoff contenders eligible for a title at Phoenix.

That evening, a slightly tamer Xfinity event ended with Noah Gragson holding off Austin Cindric to score the win and secure a spot at Phoenix. Cindric and AJ Allmendinger had already clinched spots mid-race, and Daniel Hemric came oh-so-close to winning yet again as he also grabbed a berth at the Paperclip.

Both Gragson and Smith were on the outside looking in heading to Martinsville and managed to lock themselves in.

The Xfinity 500 gets underway shortly after 2 p.m. ET, with coverage slated for NBC.