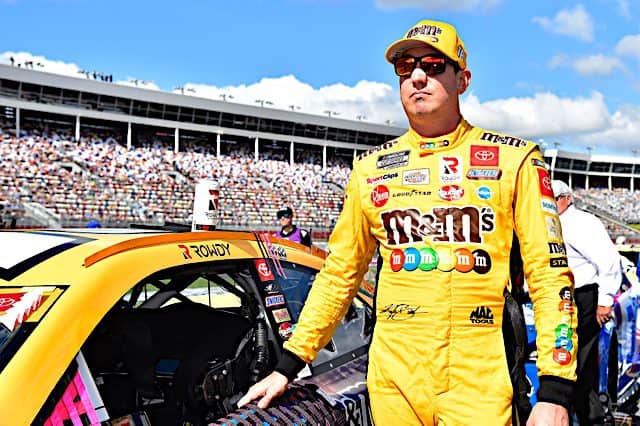 On another up-and-down day, Kyle Busch came up a few points short of advancing to another Championship 4 in the NASCAR Cup Series at Martinsville Speedway Oct. 31.

Not surprised about failing to advance, Busch was candid with his thoughts post-race on how the No. 18 team ran in Sunday’s Xfinity 500 and overall recently.

“We ran like dogshit last week and this week,” he said. “We had a hail mary opportunity there at the end and we were trying to make something out of nothing. Great effort, we did everything we could all day long, never stopped working on it. But we have missed it way too much lately. I don’t know what’s gonna happen (next year).”

Busch finished second to Alex Bowman, but it wasn’t enough to maintain his one-point advantage above the cutoff he entered Martinsville Speedway with.

“On that last restart I just tried to get a good one,” he said. “I felt like I got a decent one. Bowman missed a shift and I was to his outside, I lifted for the corner and then he went two car lengths deeper and just washed up. He was gonna hit me regardless, so it’s probably a good thing I wasn’t there. But I knew that if I could keep him pinned down a little bit as best I could and in (turns) 1 and 2 that I’d have a shot, but I wasn’t even there. I didn’t have the tires or the car to get myself back to him, I’m getting. It’s kind of anticlimactic, I guess.”

In typical Busch fashion, he didn’t mince words when sharing his thoughts on Bowman’s move with Joe Gibbs Racing teammate Denny Hamlin toward the end of the 500-lap event.

“He just drove in there and drove into him,” Busch said. “Doesn’t matter for Denny, right? All it does it come back around on you the next time the No. 48 has a chance for a playoff spot or something like that. It’s not smart but these boys love doing it.

Busch was also displeased with Brad Keselowski, who made contact with the No. 18 coming to the checkered flag sending him spinning.

“He drills my ass coming out of (turn 4) for no reason,” he said. “Where was he doing? What was he doing? He was trying to do a (Kevin) Harvick is what he was gonna do. For what? For second place? To do what? He wasn’t going to transfer though with that. Just freaking retarded, man. So stupid. I don’t understand these guys. I should beat the shit out of him right now is what I should do. But that doesn’t do me any good either.”

On not advancing: “We ran like dog shit last week and this week.”

On Bowman: "It’s just not smart. But these boys love doing it.”

On Brad: "Just freakin’ retarted man. So stupid. I should beat the shit out of him right now is what I should do.” pic.twitter.com/22avTAyiAT

Admittedly not having the speed to compete with Keselowski or up front for most of the playoffs, Busch said they hadn’t raced around each other too much but it had been respectful up until that point.

“I raced Brad fantastic all day,” he said. “I held him up more than any other driver out there the entire race. I was on the outside, my car was better on the outside today. And he couldn’t make it by me. He raced me relatively clean. Once he got alongside me he kind of washed up and moved me out a little but. Which is fine, I get it.

“And then coming to the checkered, just that dumb shit. I mean, that right there is gonna make me race him differently even though he had all the coins in the bucket the whole day. Just emptied it out right there at the end.”

Busch didn’t seem worried about any reprimands for his language or if he were to throw hands with Keselowski.

“I’ve already had to pay enough fines in my lifetime. I’m sure I’ll get another one.”

He is just telling it like it is, I see nothing wrong with that. All year he has said they didn’t have the car. He for sure hasn’t forgotten how to drive.

I’m surprised he didn’t smack the wall in the right rear so his car would handle better. The damage to Truex’s car never bothers it.

A classic Kyle Busch post-race interview! And in his own, interestingly profane way, he told us the truth (or at least as he saw it).

Based on Kyle’s comments, it seems that Bowman will probably have a big “Hit Me!” sign on his rear bumper next season. But at least Bowman gets a grandfather clock out of his efforts yesterday.

Will Kyle be cancelled for his use of a derogatory term for the intellectually disabled? Does the M&M/Mars company condone that term? Does Joe Gibbs Racing? Kyle Larson wants to know…..