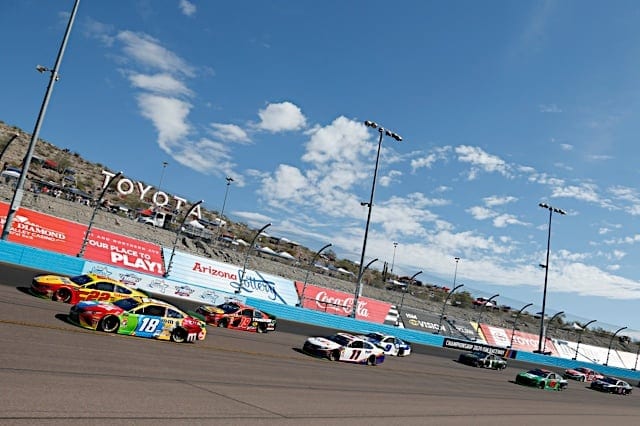 While it was Alex Bowman coming through for his fourth victory of the 2021 season, a preview to this week’s championship race was on full display at Martinsville Speedway (Oct. 31). Hendrick Motorsports’ Kyle Larson and Chase Elliott will meet Joe Gibbs Racing’s Denny Hamlin and Martin Truex Jr. in a battle to see who is standing atop the mountain.

Those four drivers showed their title prowess at several points in the Xfinity 500. Larson led 77 laps, Elliott won both stages and led a race-high 289 laps, and Hamlin led 103 laps before getting turned by Bowman for the lead with eight to go. Truex overcame contact with a couple of drivers and the wall to finish fourth and punch his ticket to the Championship 4.

An argument can be made that these four drivers are the most deserving to be here. Ironically, the four drivers vying for the title were the top four in laps led this season.

Larson and Hamlin lead the series in top fives, while Elliott and Truex are tied for third and fifth. Three of them have earned 20 or more top 10s, something only three other eliminated drivers have accomplished. They represent 17 wins of the 35 races and also have a combined 38 stage wins.

While other powerhouse teams such as Team Penske and Stewart-Haas Racing had their moments this season, the cream ultimately rose to the top of the crop.

Much debate has been held over who’s been the alpha dog between the two teams, with both switching stretches of success. Considering Larson has won nine races this season, it will likely be a highly controversial topic if he’s not holding the Bill France Cup when it’s all said and done. But one race between four of the best drivers and two top teams to decide the champion? What could happen?

2. Non-playoff driver heat is not simmering down

When it comes to unique aspect of NASCAR’s playoff system where eliminated drivers from playoff contention still get to race, there are issues that can arise. However, these playoffs appears to be like no other in terms of run-ins between title contenders and eliminated drivers. Martinsville may have been the prime example of that.

It started on Saturday afternoon in the NASCAR Camping World Truck Series. In the last stage, title favorite John Hunter Nemechek saw his hopes nearly dashed when he got turned by Austin Wayne Self. Nemechek ultimately made it in, but had to sweat out the last part of the race on the sidelines.

That wasn’t where it stopped. Defending champion Sheldon Creed tangled with Taylor Gray on the backstretch, resulting in him slapping the wall. Creed overcame the contact, but missed out on defending his 2020 title. Matt Crafton was also turned in the last stage after a bump from Grant Enfinger. Crafton remarkably kept the truck going and will have a title shot because of it.

On Sunday, there was no shortage of controversy in the Cup race. Ryan Blaney entered the race one point below the cutline, yet he looked like a punching bag on track. One week after Austin Dillon unintentionally wrecked Blaney at Kansas Speedway, Dillon made contact again with Blaney on lap 92. The contact caused extended damage to Blaney’s left-rear quarter panel. A few laps later, Blaney received another shove from Christopher Bell, costing him multiple positions. The Team Penske driver was eventually eliminated from the playoffs.

Truex nearly saw his hopes dashed when Aric Almirola washed him up the track in turn 3. He then clipped Kurt Busch and smacked the wall. The main scuffle in these cases, however, was the one betwen Hamlin and Bowman.

It was clear that Bowman was quicker than Hamlin, yet catching a driver and passing them are two different things. With seven laps remaining, Bowman overshot turn 3, sending Hamlin into the wall. An irate Hamlin took several measures to show his frustration after the race.

THE FRUSTRATIONS ARE OVERFLOWING pic.twitter.com/aAnHAhj37o

Once again, the discussion of when does a non-playoff driver cross the line comes up. How big of a concern is it when four drivers in each series will battle for a title next week? Non-title contenders have shown respect in the past, but it isn’t a given. And with what we’ve seen in these playoffs, earning respect has taken on a new meaning.

As many know, four drivers from each respective series will duel in the desert for a title at Phoenix Raceway. That means there are 12 drivers vying for a title in NASCAR this week. Comprising the total field are six Toyotas, five Chevrolets and yes, one lone Ford. That Ford is driven by defending NASCAR Xfinity Series champion Austin Cindric, who is tied with AJ Allmendinger with a series-leading five wins.

As astounding as it is, only one Ford may not be much of a surprise. Only one Ford qualified for the truck playoffs, and there are only two quality rides for the blue oval in the Xfinity Series. But the Cup Series is the main area of concern.

What accounts for this drop-off? It could be several scenarios. One possibility is the fact that the Gen-6 car is in its last year before the Next Gen car moves in for 2022. Maybe Ford has gotten a head start on prepping their cars to immediately hit the ground running. Perhaps it is because of Chevrolet’s rise in 2021, leading the manufacturers with 18 wins.

Still, there are areas for concern. Ford stuggled mightily on 550-hp tracks, with only Blaney finding success on intermediates. The organization has found some speed late in the game, but inconsistencies still remain. The SRX series may have taken a good bit of Stewar-Haas Racing co-owner Tony Stewart’s attention. Team Penske saw all three of their drivers eliminated from title contention following Martinsville after suffering various issues.

What happens to Ford for the future remains to be seen. There are plenty of reasons to believe they will bounce back next season. One thing is for sure, however: 2021 can be forgotten on many levels.

4. Rivalries are ablaze and penalties could be coming

There are some common emotions in the aftermath of a Martinsville race. Hurt feelings, hot tempers and silent treatments usually follow a dramatic race on a short track.

Rivalries were on display during and after the 500-lap event. The main outcome was Hamlin vs. Hendrick Motorsports, specifically Bowman. Hamlin called Bowman a “hack” and “terrible” to voice his frustrations with the No. 48 driver, and that is to put it lightly. Bowman could have easily been shaken up by it, but the marketing team decided to make lemonade out of it.

Humor aside, Hamlin must turn his attention to the championship race and relinquish the bitter feelings that have troubled him in the past. Blocking a celebration went a bit far and added controversy. However, Bowman was not the only HMS driver on the end of a Hamlin jab.

The 40-year-old Hamlin received a plethora of boos following the race during an interview. When asked about being booed, our own Davey Segal reported Hamlin taking a dig at Bowman’s teammate Elliott and his fanbase.

Elliott sarcastically told another one of our own, Michael Massie, that “I’m gonna lose so much sleep tonight. I might not sleep at all. That’s how concerned I am. My fans don’t care either.”

Considering Hamlin will be fighting two Hendrick cars for a title, including Elliott, a rivalry with the organization should probably not be in his interest. The last time Hamlin messed with Elliott, NASCAR’s reigning Most Popular Driver was not afraid to retaliate.

In all of the mess of Hamlin versus HMS underlies the question if the Chesterfield, Va. native should be penalized. Hamlin took aggressive action to thwart Bowman’s celebration, which included certain gestures and harsh words in the interview. With Quin Houff being held for five laps for intentionally retaliating against Josh Bilicki and Kyle Busch potentially facing penalties for calling Brad Keselowski a derogatory name, Hamlin should be held to the same standards.

His actions were unnecessary and overaggressive, and it casts a bad shadow on a potential champion.

There will be no penalties for Hamlin. NASCAR has not penalized for cursing on television in several years and didn't view Hamlin's on-track postrace as egregious (my word) enough to penalize. https://t.co/pvjYJbeFFz

5. Daniel Hemric could pull off a rare feat

Do you remember the GEICO commercial with the fisherman and the dollar on the end of his pole? “Ohhh, you almost got it. You’ve gotta be quicker than that.” Daniel Hemric should be on the other side of that pole.

At this point, you have to wonder when will everything line up. In Saturday’s Martinsville race (Oct. 30), Hemric had a comfortable lead with eight laps to go before a yellow for Justin Haley derailed it all.

Hemric slipped to second on the restart before another yellow flew. The No. 18 had to make a decision: take the top on the choose rule and race for the win, or take the bottom and play the points game. They opted for the latter option and Hemric finished third, with Noah Gragson grabbing the checkers and a spot in the Championship 4. The conservative choice sealed Hemric’s spot in the Championship 4; but you have to wonder, what could have been?

“It’s the first time as a racer that I’ve had to choose to not put myself in the best position to win,” Hemric said after the race. “I wanted to line up on the top. I felt like I could beat him (Noah Gragson) if everything is all fair game, but the ultimate goal at the start of the season with this Poppy Bank Toyota Supra team was do what we officially have a shot to do in Phoenix next weekend. It just felt like we had a shot to minimize the damage and that’s what we did. I’m so disappointed. This car should be in victory lane.”

The silver lining for Hemric is that he will race for the championship in Phoenix. In three full-time Xfinity seasons, he had made the Championship 4 each time. Still, the glaring stat is no wins. That could all change at Phoenix and Hemric could win his first race the same day he wins his first title. What if he doesn’t? The opportunity still exists. Hemric could legitimately finish second for a record-setting time and win the title without winning a single race. If he does, he would become the third driver to do so in NASCAR history.

“Hemric could legitimately finish second for a record-setting time and win the title without winning a single race. If he does, he would become the third driver to do so in NASCAR history.”

Okay, I’ll bite… who were the other two?

I think we have a long wait for him to answer. lololol. I think people are forgetting about William Byron. He has the talent and if he has the car, he definitely isn’t afraid to mix it up with Hamlin. He might get a bonus from Jeff.

Which is why there was never a NASCAR champion aside from Kenseth, who won 1 race in 2003 and then we had the CHASE and the SPRINT and the PLAYOFFS, so what format suits wins? You decide.

Benny Parsons also only one won race back in the 70’s and got the championship too.