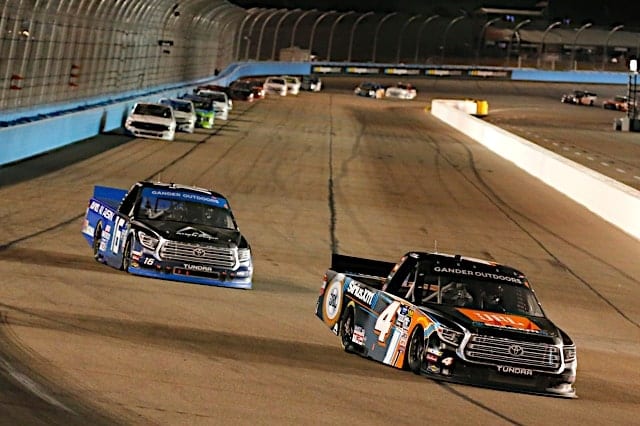 It’s hard to believe, but the last weekend of the season is approaching. Four NASCAR Camping World Truck Series drivers will make a push for glory to earn a championship. Matt Crafton will seek to tie Ron Hornaday Jr. for the most truck titles, while John Hunter Nemechek, Ben Rhodes and Zane Smith are seeking their first.

41 trucks are entered for 36 spots. Practice and qualifying returns for the Lucas Oil 150 this weekend, as select drivers will seek to lock a spot in the race.

Jordan Anderson returns to his own No. 3 Bommarito Automotive Group Chevrolet for the ninth time this season.

Taylor Gray is back in the No. 17 Team DGR Ford for the second consecutive week and the fifth time in 2021.

Willie Allen will attempt just his second start of the season in the No. 25 Rackley Roofing Chevrolet for Rackley W.A.R.

Will Rodgers is scheduled to make his second attempt of the season for Reaume Brothers Racing in the No. 34 Toyota. The team’s No. 33 driver will be announced later on.

Dean Thompson will make his Truck debut at Phoenix behind the wheel of Niece Motorsports’s No. 44 Thompson Pipe Group Chevrolet.

Lawless Alan steps back into Nice Motorsports’s truck since his last start at Talladega Superspeedway. Alan will pilot the No. 45 AutoParkIt.com Chevrolet.

Todd Peck returns to the series for his second start of the season after competing at Pocono Raceway in June. Peck will attempt to enter the No. 96 Chevrolet for Peck Motorsports.