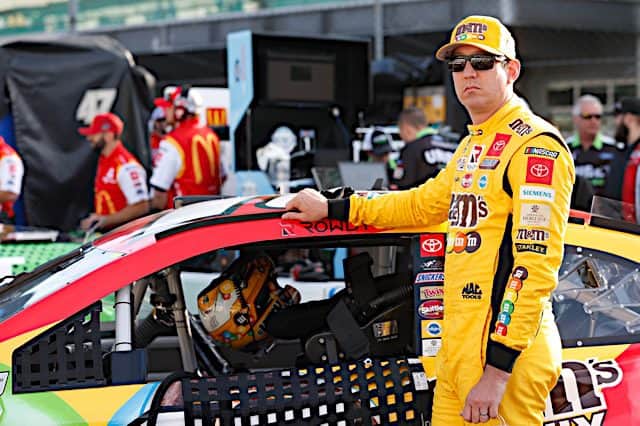 NASCAR will require two-time Cup Series champion Kyle Busch to complete sensitivity training before the 2022 season. The penalty was a result of Busch calling Brad Keselowski a slur in a post-race interview.

Busch and Keselowski were racing hard at the end to try and make the final spot for the Championship 4, with both coming up just short. After the two took the checkered flag, further contact between them sent Busch spinning, though it appeared Busch turned into Keselowski’s No. 2.

The Las Vegas, Nev. native used the word in a heated post-race interview in which he voiced his frustrations with Keselowski. Afterwards, he tweeted a public apology for his wording.

In one of my post-race interviews I used a word I should never use and I want to apologize for it.

According to NASCAR, Busch’s word choice violated their conduct guidelines.

“Kyle Busch will be required to complete sensitivity training before the start of the 2022 season as a result of language used during a post-race interview that is in violation of NASCAR’s conduct guidelines,” NASCAR said in a statement.

See also
Kyle Busch Narrowly Misses Out On Championship 4: 'We Ran Like Dogs**t'

NASCAR’s rulebook states that “NASCAR members shall not make or cause to be made a public statement and/or communication that criticizes, ridicules, or otherwise disparages another person based upon that person’s race, color, creed, national origin, gender, sexual orientation, marital status, religion, age or handicapping condition.”

NASCAR Camping World Truck Series rookie Hailie Deegan was also required to take sensitivity training for using the same word prior to the season in January.

WTF? How terrible he called someone a bad name.
How far do they want to neuter this sport?
This is all about the PC police wanting their pound of flesh. And do you really think sensitivity training is going to change Kyle? He’s already a graduate of that school isn’t he?

Ted
Reply to  Bill B

Agreed. I don’t like this guy for this reason, but this PC *stuff* is ridiculous. I would rather he use vulgar language, rather than what his teammate did using his vehicle as weapon. They literally punished Quinn Houff for doing the same thing, and turned a blind eye on Hamlin. Didn’t Hamlin also use vulgar language in his interview?

Wonder if his psychiatrist wife is still certified ! And what does Denny’s foul mouth get him ! Bowman had his window net down, straps off and hands off the wheel in video. The Denny is hitting and pushing his car. Oh that’s right, Denny is now a Toyota car owner.

Denny should have got out and popped him right in his little p*nk mouth.

What Denny did is not nearly as bad as spinning someone right in front of a safety vehicle!

Bill B
Reply to  Dav_Daddy

Denny should have popped Bowman in his mouth? For what, doing the same thing he himself has done on more than one occasion?

BTW, you can spell and say the word “punk”. It isn’t a censored word…. yet. Apparently the “F” word is OK too as Denny said after the race but didn’t get any punishment. However not the word “retarded” which Kyle Busch said and did get in trouble.

the ‘c’ in nascar stands for candyass

It doesn’t cease to amaze me how words cause more outrage than actions. There is more outrage at Kyle’s choice of words here than his reckless ride to the garage at Darlington, where people could have been in actual danger.

Sticks and Stones may break my bones
but Words will get me Cancelled.

I don’t care for Kyle Busch but what is this? Kindergarten?

No, this is Nascar today. Wait till next year and we will see if we are all still here.

He said “retarted” not retarded. NASCAR going at the “boys have at it” so candyasses as someone related above, will watch.

Yep! That’ll solve all NA$CAR’s problems. And they haven’t even got to the lug nut penalties. They’re really working as expected by the fans..

In this case, the offended class isn’t politically important, so nobody needs to be cancelled.

Ding ding ding. Go through the motions correcting people for using the ‘R’ word. Use a word denigrating a democrat voting bloc and your career is over.

Sensitivity training for Kyle?! …and Hamlin doesnt need maybe just a little anger management training? LOL. Which driver dropped the “F Bomb” on live broadcast?
Give me a field of Harvicks, Hamlins and Busch’s any time over the vanilla drivers that NASCAR is trying to raise up.
Perhaps NASCAR should paint all the cars the same color and all have the same number so that everybody can be a winner/ participant.

It always gets me how NASCAR gets their panties in a wad over some PC language when drivers regularly take the Lord’s name in vain and that’s fine.
In their eyes it’s a greater sin to call a human being some derogatory name but to curse their Creator is just fine.

Maybe they should gather up those folks that are booing Bubba and send them to sensitivity school. They’re hurting his feelings!

What a crock. Who decided we can’t say certain words ? I don’t remember voting on that or a poll taken even. It’s not just nascar-nearly all have bent over and said which cheek ? to the small group pushing this insanity .Now instead of “venting” we just fight/shoot/stab etc.

I don’t agree with the crime, but maybe the “punishment” will do him some good in changing his attitude.

Echo
Reply to  Kevin in SoCal

Your talking about Kyle Busch here !!! He’s the most mellow he’s ever been lol Don’t hold your breath waiting for him to change his attitude. I hope they give him a good car to drive in Phoenix.

NASCAR executives must go through pantywaist/butthurt deprogramming or this sport is lost.

I hope a mechanic isn’t overheard stating that the engine was running poorly because the ignition timing was retarded.

Usage of words is always a matter of timing.