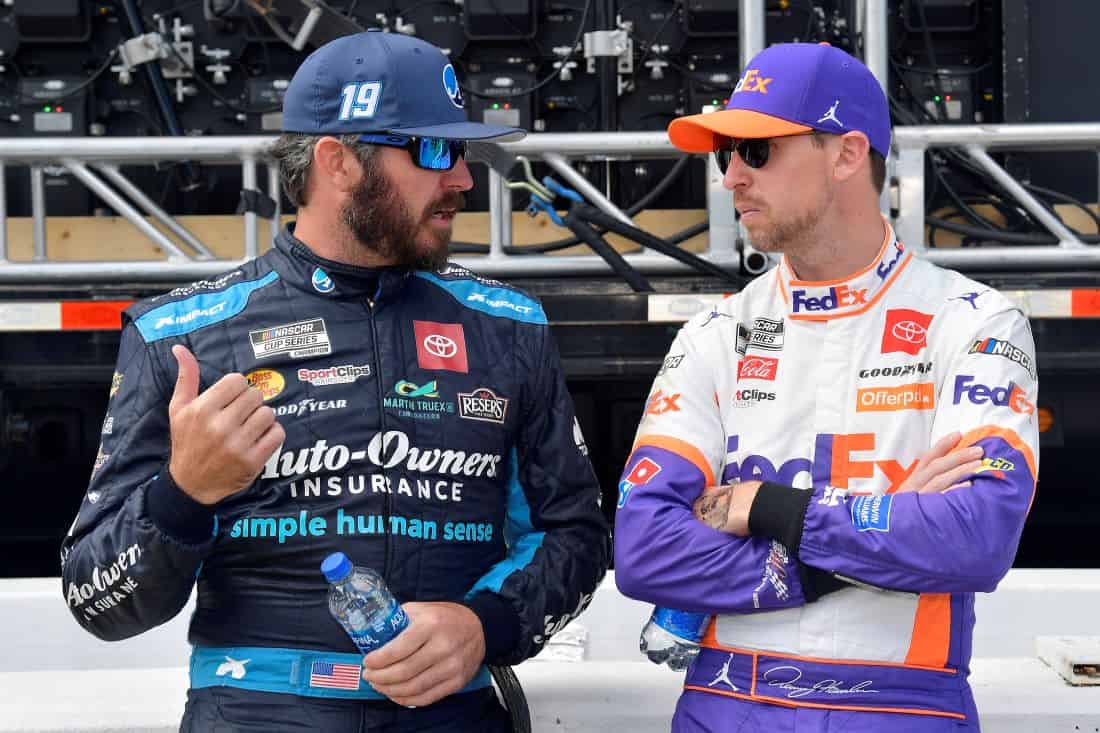 Who … should you be talking about after the Xfinity 500?

2021 has been a breakout year for Alex Bowman. The 28-year-old posted three early wins and advanced to the Round of 12 in this year’s playoffs before stumbling a bit. At Martinsville Speedway, he put an exclamation point on the deal after a late-race battle with Denny Hamlin. It’s one that ended with Hamlin going for a spin as the two fought for real estate, Bowman emerging intact and heading to victory lane in Sunday’s (Oct. 31) Xfinity 500.

The spin may not have been intentional, but there was plenty of bad blood after the race. Bowman shrugged it off, pointing to Hamlin’s checkered past at the half-mile track. My take? He’s grown as a driver and has learned to run up front. It’s Bowman’s fourth win of the season and first grandfather clock trophy.

And don’t forget… Erik Jones. The No. 43 has had its fair share of success at Martinsville (Richard Petty has 15 wins at the track) and added another top 10 to its tally with Jones’ eighth-place effort, his sixth top 10 of 2021. Jones kept himself out of trouble and raced his way to exactly the kind of result this underfunded team needed.

It’s all about the playoffs as NASCAR sees the white flag waving on the 2021 season. Entering the Xfinity 500, the main storyline was about who’d get the chance to make a title run next week. At this point in the year, it’s hard for a non-playoff or previously eliminated driver to get any attention. That’s why Bowman’s win was so impressive, one of a few who forced viewers to sit up and take notice.

Christopher Bell, Aric Almirola, Jones and William Byron had strong performances that grabbed a little of the spotlight. Austin Dillon also had a strong run, making waves with Ryan Blaney early before a late encounter with the wall marred his day.

Next week will be all about winning the championship, so don’t expect a playoff outsider to make a run like Bowman’s if past history is any indication. No driver could run with the contenders last year as the Championship 4 posted a 1-2-3-4 finish in the finale.

Where … did the other key players wind up in the Xfinity 500?

Pole sitter Kyle Larson has struggled at Martinsville, with only three career top 10s and a pair of top fives to his name. That track record didn’t change on Sunday. He led 77 laps early only to be hampered by a pit road speeding penalty. He climbed back through the field, only to draw a second one and finished a mediocre 14th.

Active Martinsville win leader Hamlin really didn’t want to see a late caution fly for Ryan Preece. The No. 11 Toyota was leading when that yellow flag flew. And while he held off the charging Bowman on a restart, the two tangled racing for the top spot, with Hamlin spinning as Bowman got loose underneath him. Hamlin finished 24th but he’ll still transfer to the title race.

Defending champion Chase Elliott threw one block too many for Brad Keselowski’s liking, and Keselowski let him know by moving the No. 9 out of third place in the closing laps.

Elliott led over half the race with 289 laps out front and was trying to run back down the leaders when he tangled with Keselowski. Forced to pit, Elliott wound up back in traffic and ended up with a 16th-place finish.

After the checkers, Hamlin pulled onto the frontstretch, blocking Bowman’s car as he attempted to celebrate his win. Hamlin was quickly called off by his crew, noting they did not want to draw NASCAR’s ire with the title on the line next week.

Will NASCAR penalize Hamlin? That’s a good question. Robby Gordon was penalized for a 2007 incident at Montreal when, unhappy with a late call by NASCAR, the driver stayed on track and did a burnout despite not being declared the winner.

But the meat of Gordon’s infraction was ignoring a black flag, which was not an issue here.

Still, even if Bowman’s move was intentional, Hamlin’s action after the checkers was over the line and deserves a hard line from NASCAR in the form of a fine. It was a display that cannot be allowed to happen, and if officials do nothing, that opens a door for more of the same. It’s bad for the sport and such behavior shouldn’t be allowed to escalate going forward.

This is it. One more go-round before the champion will be crowned and the engines will quiet for the winter.

Except this year, they won’t. Expect a few test sessions for the new car to spice up the offseason heading into 2022. That change brings a big unknown into the sport. The drivers seem happy so far, but what they like to drive and what fans want to see aren’t the same thing.

So, even as the title race hits its final gear, next year is already in the foreground. This car, frankly, has to be a success. That doesn’t mean every race has to be a classic, but it does mean they have to be good, and they have to make fans want to see them in person. There’s a lot riding on this Next Gen chassis.

How … should the title race go down?

If the playoff system was based on the most deserving driver, Larson would walk away with the title after a battle with Hamlin. However, that’s not how NASCAR’s system works.

There are some factors to consider, including past performance at Phoenix, momentum coming out of Martinsville, and overall recent performance. Larson has been red hot, winning three races in a row before a hiccup at Martinsville. While it probably wasn’t bad enough to be a momentum killer, he’s the only contender without a win at Phoenix. His average finish is on par with both Hamlin and Elliott, though so he has to go in as the favorite.

Hamlin has two playoff wins and came close to a third Sunday. If he uses that to motivate himself and his team instead of letting it get to him, it could be a powerful kickstart. Hamlin’s own worst enemy in championship battles has been himself, though. While he’s had a great season by any measure, it’s hard to see him as a closer here.

See also
Up to Speed: Denny Hamlin Needs to Let it Go

Elliott will defend his race win and title on Sunday, proving to be Larson’s biggest competition. His numbers are slightly better at Phoenix than Larson’s overall, but he’s had an inconsistent playoff run. Elliott hasn’t been able to run with Larson as consistently as he’d like and has four races with finishes of 16th or worse.

Martin Truex Jr. won the spring race at Phoenix, and he’s been solid, but his lone playoff win at Richmond Raceway is offset by an up-and-down streak of feast or famine. He was his own worst enemy at Martinsville after overdriving to the point where it almost cost him a spot in the title race. Now that he’s there, Truex brings championship experience, along with the momentum of squeaking through.

However, Truex hasn’t been a weekly threat through the playoffs, inconsistency putting a damper on performance. Whether he contends will depend on which version of his No. 19 team shows up on Sunday.

I think Bowman had exactly the correct response to Hamlin’s post race screed. Hamlin has always been a whiney little twerp so his response was no surprise.

When you’re racing in front of your home state crowd, & they cheer when you get spun out, & boo during your post race rant. Then you might want to check your hole card, behavior wise. But don’t hold your breath. When he wrecks someone it’s always “just hard racing.”

Also booed him during driver intros.

“If the playoff system was based on the most deserving driver, Larson would walk away with the title after a battle with Hamlin. However, that’s not how NASCAR’s system works.”

Then why did the moron change the system in 2004?

Karma got Texas Capital Dillon and Hamlin. Let’s hope it continues in Phoenix.

I’m hoping so too.