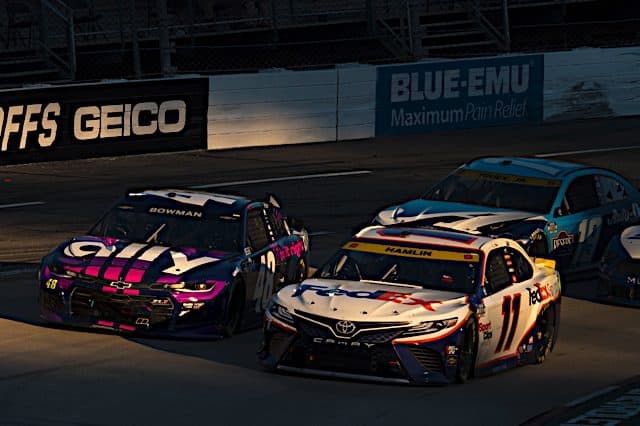 Denny Hamlin‘s hunt for a NASCAR Cup Series championship has been fruitless so far.

Whether you’re a longtime fan or a more recent viewer, you know Hamlin hasn’t won the title because it becomes a storyline every November.

Statistically, he never came closer than 2010 when he finished runner-up to Jimmie Johnson in a public collapse that followed missed strategy and mental mistakes in the final two races of the year.

That’s what makes Hamlin’s latest spat with the No. 48 team so palpable. In fact, it feels like this may finally be the match that ignites the gasoline and sends Hamlin to the championship stage at Phoenix Raceway on Nov. 7.

Hamlin has gotten into plenty of skirmishes with other drivers throughout his career – a list including but not limited to Joey Logano, Chase Elliott, Brad Keselowski, Corey LaJoie, Chase Briscoe and more.

But Sunday’s (Oct. 31) incident with Alex Bowman may be the most livid Denny Hamlin has been after the checkered flag. Face-to-face confrontations aren’t new to Hamlin, but going bumper to bumper, shooting the double bird and setting up near-dueling burnouts with the guy that spun him from the lead? I think that’s new territory for everyone involved.

Then, of course, came the soundbites, calling Bowman a “hack” and “fucking terrible” while he gets his “ass kicked by his teammates every week.”

See also
Up to Speed: Denny Hamlin Needs to Let it Go

Some may argue that Hamlin has already lost the championship because he’s allowed Bowman to get in his head and distract him. Tweets defending his actions and emotions make him look weak, even replying to a bitter Chase Elliott fan.

You have your interviews mixed up. Not surprising. It’s a half a decade ago. Get over it

I argue the opposite.

Hamlin is more passionate about NASCAR and his career than ever before. Much of that stems from the dominant year he’s had — yes, he’s losing the wins battle to Kyle Larson by a score of 9-2, but no one has a better average finish this season than Hamlin (8.6 to Larson’s 9.3). He’s also an owner in the sport with the most recognizable name in sports through his partnership with Michael Jordan at 23XI Racing.

And by the way, wouldn’t it be something if Hamlin could do something Dale Earnhardt Sr. couldn’t — winning a championship while owning a team he competes against?

Back to the present. Hamlin appears more engaged than ever. His consistency and confidence lead to strong finishes even on days where he should’ve finished far worse (see: Texas Motor Speedway and a rally to 11th).

His rage at the end of Sunday’s race at Martinsville clearly reached a fever pitch. In years past, that would have been the immediate signal that told me to write him off; his title hopes are done for 2021.

The path is not easy. It leads through Larson, this year’s best driver; through Elliott, the defending series champion; through Martin Truex Jr., the 2017 series champion.

But perhaps when it’s all said and done and the smoke settles, it will have been contact between Bowman and Hamlin — the Nos. 48 and 11 clashing again — that finally vaults Hamlin into his elusive first NASCAR Cup Series championship.

The championship race at Phoenix can be seen on Sunday, Nov. 7 at 3 p.m. ET with live television coverage on NBC.

Perhaps. But Denny’s inner turmoil is much more than just his Nascar shenanigans. His longtime partner just left him and took their daughters with her. She stated she was tired of the piece of crap and that he was never going to change. I agree with her, I think he chokes. Too much rage is more likely to cause mental miscalculations.

And why haven’t we read that in the news about his longtime partner leaving him?

Google Jordan Fish , it’s been all over Nascar news.

Hack t shirts, media pressure, inner turmoil, rage, nah, Denny can’t tune out everything. The pressure is going to build and he can’t turn away from it. Perhaps he needs to talk with Samantha.

She’s got more than enough on her plate with Baby Busch.

lololol yes she has ? and he has mellowed out. He really has.

I wouldn’t say he can’t, or won’t check his last box. But I think he’s got the stiffest competition he’s ever faced. What’s your over/under on speeding on pit road? Both he & Larson have shown a propensity to fall victim to this, & it could well decide the outcome.
When it comes to “burnout time” I have to give the edge to Hendrick, & Chevrolet.

Ha I hope not. I want Hamlin to never win the big trophy.

Is this you again Denny ?