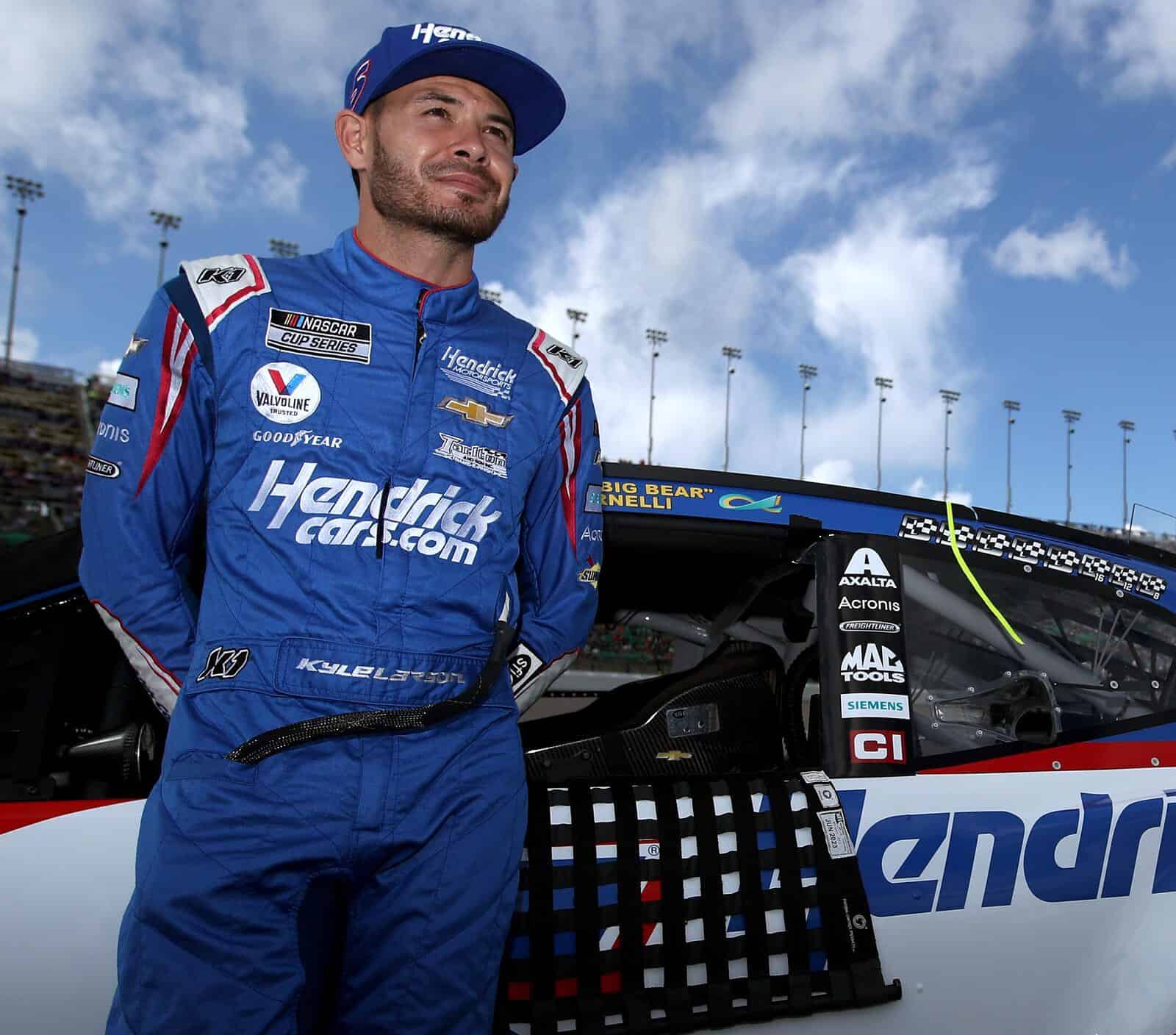 I know it. You know it. Kyle Larson knows it.

He’s won three races in a row twice, a feat not seen since Dale Earnhardt did it in his Wrangler colors in 1987.

A year after he was out of a job due to the fallout of saying a racial slur in an iRacing event, the Hendrick Motorsports driver will get his first chance at a NASCAR Cup Series title Sunday (Nov. 7) at Phoenix Raceway.

“It’s pretty crazy,” Larson said after his win at Kansas Speedway (Oct. 24). “I didn’t know what to expect coming into this season. I knew I would have lots of opportunities to get wins. But never did I think I would win as often as we have.”

However, even after all that dominance and rewriting of the history books, it’s entirely possible he’ll leave Phoenix without the title in hand.

That’s always been a possibility, even before the playoff era and the winner-take-all format for the championship race was introduced.

Just ask Rusty Wallace, who won 10 times in 1993 but lost the title to Earnhardt (six wins). Or Gordon in 1996. He also claimed 10 wins, but the consistency of teammate Terry Labonte delivered the two-time winner his second title.

See also
Fire on Fridays: Are We Watching the Last (Cup) Races of Ryan Newman?

Then there’s Kevin Harvick‘s 2020 season of nine wins before he was eliminated in the Round of 8.

So is the 29-year-old Larson prepared for that possibility?

“I don’t know,” Larson said. “I try not to think about it. And I think the more wins you get — hopefully we’re winning the championship in Phoenix — but I feel like the more wins we’ve gotten will make that feeling if I happen to not win, make it easier to swallow I think, just because it has been a great year.”

It’s been a year that’s made Larson appreciate his past accomplishments and the effort it took to earn them even more.

A dirt racer with an immense amount of buzz around him, Larson didn’t get his first Cup victory until his 100th start.

In his six full-time seasons with Chip Ganassi Racing, Larson only earned six Cup victories. Four of those occurred in 2017.

“I feel like for a long time I could have been viewed as the most overly hyped driver in the Cup Series,” Larson said. “Because I think everybody saw the potential and […] I thought the potential was there to have seasons like I’ve had now this year. But you just don’t know if you’re lacking on equipment and stuff like that or if it’s just you.

It’s a bit ironic that Larson has a chance to crown himself as a Cup champion for the first time in the same race that marks the end of his former team, Chip Ganassi Racing. Ganassi’s operation was never a perennial contender for the title during Larson’s tenure. His best point finish there was sixth in 2019.

“[This season] makes me realize, too, how much we accomplished in the [No.] 42 is something to be very proud of, seeing the lack of resources in a way compared to what we have at Hendrick Motorsports,” Larson said. “Getting to see both sides of it, it’s amazing we won as much as we did and ran as well as we did.”

At the end of 312 laps Sunday (Nov. 7), Larson could be the champion. Or it could be Chase Elliott, Denny Hamlin or Martin Truex Jr.

“I’ve said for many, many weeks now that it would be a disservice if someone other than the two of us didn’t win,” Hamlin said, referring to himself and Larson after Sunday’s (Oct. 31) race at Martinsville Speedway.

“I mean, he’s obviously probably the most deserving over the course of the year that he’s had from start to finish,” Hamlin said. “But, yeah, the format, you just never know.”

Despite everything that’s happened for Larson in the last 10 months, the story of his 2021 season is far from over.

“It’s like hard for me to think if people will really remember if you don’t win the championship now at this point,” Larson said. “Not that it adds pressure, but you can read into it adding pressure that I want to win the championship even more to cap off what’s been a great season.

“So that’s my goal. […] I just really want to win a championship and see where it stacks up.”

Should he come up short, Larson’s name would still still be included in a conversation that includes Wallace, Gordon, Kenseth and Harvick.

All of whom are champions, Hall of Famers or future inductees.

That’s not bad company to keep.

It WOULD be a shame. But one race among four is the hand nascar dealt them. 19 top 5’s, I didn’t realize that. At least we got to see his talent with a top team in Cup. Last year he showed us his talent on dirt in many series, against the best of the best. He for sure will be remembered as a racer, and a truly talented wheelman.

So sad that a driver can loose the championship this way. Somehow in racing it shouldn’t be decided by who does better in the last race. Just not right.

I suppose since he won 9 races this year he’ll be the favorite just because of that. I’ll bet my $ on Chase, congratulation Chase on your 2nd championship, winning 2 maybe 3 races and your the champion, what a joke.

You have to think of the 4 teams running for the Championship, like the Final Four during March Madness. Just making it makes your season. Making the Cup playoffs isn’t that big of a deal. Sixteen make it, realistically only about 20 cup teams have much of a chance to win. Barring some team with nothing to lose, staying out during a yellow for rain. Too many things can happen with the format that could keep the most deserving team out of the 4 from winning. So all the 4 teams have good reason to feel proud of their season regardless of the outcome.

The champion should be from the entire season, not a made-for-tv spectacle that continues to lose diehard fans each year. NASCAR was always about endurance and in the first years of the Chase, it was as well (2004-until the playoffs) but seriously, let’s use the current 1 pt per position format and go back to a full-season champion, not a one race decision.

I think the Final 4 all deserve to have a shot at the Cup. If this had been under the old Latford System of points, we’d be looking at a two team playoff between the #5 and #11. Now we get 4 guys – The defending Cup Champion in Elliott; a former champion in Truex; arguably “the best driver yet to win a Cup” in Hamlin; and the dominant driver of the year in Larson. I think this shapes up to a pretty decent scenario for the “winner take all” final race.

Under the Ltford system there was a winner-take-all among 4 drivers in 1992. And it was a real “race.”

The maximum points total for the Cup title holder is 5040 which goes to the winner of the final event.

Any bets against the point total of the future title holder being 5040?