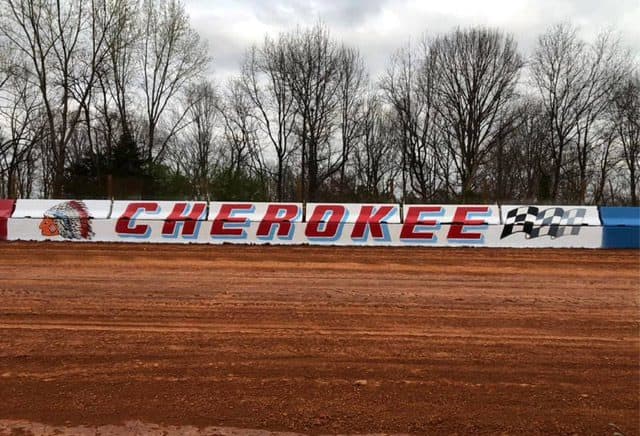 Mark Whitener proved a potent opponent in the opening 50 laps, but Sunday’s National 100 feature ended up looking like the rest of 2021, with Brandon Overton untouchable up front as he cruised to his first career win the longstanding EAMS event, keeping World of Outlaws late model regular Dennis Erb Jr. at bay in the closing laps.

Fayetteville, N.C.’s Daulton Wilson benefitted from one of the most freak incidents of the 2021 racing season, then held off a furious charge in the closing laps from Brandon Overton to win the $7,500 headlining event of the inaugural Prelude to the Finals at Cherokee on Tuesday night.

Polesitter Ross Bailes led the opening 24 laps of the event and was fending off his own challenge from Overton when the driveshaft of the car broke heading down the frontstretch on lap 25, showering Overton’s No. 76 car with debris, a piece of which destroyed the spoiler on Overton’s machine. Opting to stay on track without a spoiler, Overton lost the lead to Wilson on the lap 25 restart, but figured out a groove on the high side of the track to close back to within a car length of the win by race’s end.

Polesitter Brent Crews led the opening 47 laps of Wednesday’s feature in dominant fashion, but was forced to the rear of the field after getting caught up in an incident involving a flipping lapped car with three laps to go. Sent to the rear, the lead was handed to longtime Millbridge regular Carson Kvapil, who held off Ryan Timms for the final three laps to score the richest win of his career, scarcely a week removed from being named Josh Berry’s replacement in the JR Motorsports late model program.

. @MillbridgeRacin REPLAY: @Carson_Kvapil fends off two big sliders from @RyanTimms_5T to take the victory and the $10,000 check as the winner of the @Walkapedia_ Carolina Micro Showdown! pic.twitter.com/7tgTEv5eHy

Social media indicated that Crews and his crew immediately disputed the call to send them to the rear of the field after Crews was able to drive away from the incident. However, the Millbridge track rulebook does state that coming to a stop as a result of an incident is grounds for being sent to the tail, and DirtVision’s video replays were conclusive in that regard.

Whitener has made more of a name for himself as a crate late model racer of late, but the move he put on Brandon Overton to take the lead for the first time in Sunday’s feature was masterclass and left the No. 1 late model driver in America dead in his tracks. That Whitener kept Overton either behind him or in striking distance for nearly 50 laps was better than most drivers in America have been able to do in 2021.

Not only did Brent Marks win the inaugural 410 sprint car feature at Cherokee in dominating fashion, he did it in the debut race for his new Murray-Marks Motorsports team. The improvement in the No. 19 over the second half of the season has been night and day, and though they’re currently planning to run an “outlaw” schedule as opposed to a national touring series in 2022, expect them to make some noise.

Given that Brandon Overton has won everything under the sun in 2021, crediting him for a second-place run may seem out of place. But watching Overton come within striking distance of a win despite racing without a spoiler was as impressive a display of driving as any dirt track has seen this year.

Who even needs a spoiler? ?

After contact with @RossBailesRacin, the Wells Motorsports team elected to take off the damaged spoiler for the remaining 16 laps. @Boverton76 still wheeled his way to a runner-up finish. #PreludeToTheFinals pic.twitter.com/WEQuozZ3F8

Overton’s display was made possible by Ross Bailes enduring a catastrophic driveshaft failure while leading Tuesday’s super late model feature at Cherokee. It’s doubtful that Bailes would have been able to keep Overton stymied for 15 more laps the way he was being harassed, but the driver of the No. 79 deserved better than he got.

Brent Crews. Yes, he was able to immediately drive away after getting collected in an incident with a lapped car with only three laps to go in Wednesday’s micro feature at Millbridge, but he very clearly came to a full stop, and the rulebook is clear that means going to the rear. Crews had led all 47 laps from the pole before the incident.

Clover, S.C’s Tim Vance fought the wall and the wall won, jumping the cushion and pulverizing his machine during late model qualifying at Cherokee on Tuesday.

Micro driver Nigel Standish let the crowd at Millbridge know Wednesday night that his micro sprint car was up for sale, then flipped it in his qualifying race maybe an hour later. Lemon law in effect.

DJ Vanderley endured the flip of the week at Millbridge, but in terms of villains and victims, Jade Avedisian absolutely bowled over Reese Nowartarski in the second B-main with a slide job that was doomed before it started.

Just not even remotely close pic.twitter.com/PPBU0loPWe

Semi-retired sprint car driver and current Port City Raceway promoter Shane Stewart endured a rough night when he flipped at Cherokee Tuesday night, wrecking a car that he had intended to run in the Finals at Charlotte later this week and leaving the track with a noticeable limp. What’s more, his team car was involved in a collision two laps later in the feature.

The World of Outlaws unveiled their 2022 schedule earlier this week, with few real surprises on the docket for the upcoming season. Most intriguing question I can ask for now is what a $100,000-to-win feature at Huset’s will do for car counts for that event. The biggest bummer on the schedule? Bristol is back on the docket. Stab me with a sword trophy.

The camera crew at East Alabama on Sunday did a solid job covering the National 100 feature. The only issue? There was no functioning lap counter for much of the event, and it took 48 laps before the PA crew actually mentioned what lap the race was on. HELP!

Anyone that follows Walkapedia on Twitter knows full well that his (Brian Walker) statistical knowledge and tracking, especially with regard to the Chili Bowl, is nothing short of comprehensive. Having said that, watching the “Walkapedia” Carolina Micro Showdown and listening to the DirtVision crew try to track passing points in realtime was headache-inducing. I’d wager the $200 it paid to win fast time for the event that it employed passing points just to create more stats for its namesake to track.

A group of fans sitting next to me during the intermission at Millbridge on Tuesday literally burst out laughing when they saw just how paltry the car counts at Cherokee were Tuesday night, with only 13 sprint cars and five big-block modifieds showing up for the event.

Some low car counts at tonight's Prelude to the World Finals at Cherokee Speedway.

Fans in the replies say it cost $35 to get in. https://t.co/7ksvuxbbyy

Having said that, a shout-out does need to go to the folks at Cherokee, who paid a full purse in all classes despite the short fields. Even in the Internet era, there’s no shortage of tracks that don’t do that. Though I can confirm I heard multiple folks in the pits at Millbridge reference the same story that the Cherokee race dropped an entry fee on top of pit-pass costs for the race teams at the 25th hour.

My work schedule sadly only allowed me to be on-site at Millbridge on Tuesday, but I will say having attended the first of a 2-day event, the Chili Bowl has taught a very valuable lesson to any form of short-track racing. If you’re going to have a preliminary night, it needs to end with a preliminary feature. The Lucas Oil Late Model Dirt Series does this to perfection. Regardless of how cool it is to spend a weeknight at Millbridge (read the next paragraph), there is no escaping how anti-climatic it is to run heat races and call it a night.

Enough ragging on event format, Millbridge Speedway is badass. Fans have free reign to go anywhere in the pits they want, video boards galore, and the concession stand is among the best I’ve seen in terms of prices and offerings. The walking tacos are definitely worth the hype. If it wasn’t 300-plus miles away from home I’d be a weeknight regular.

$3 – cost of a Millbridge walking taco, and they’re worth every penny.

9 – flip count for the Showdown at Millbridge.

59 – micro sprint drivers entered at Millbridge for the week’s Showdown.

Where it Rated (on a scale of one to six cans with one a stinker and a six-pack an instant classic): We’ll give the midweek four Abita Peach Lagers in honor of a show in Gaffney. None of the midweek’s races were classics, but the Overton/Wilson finish at Cherokee was special, and it’s a rare midweek with three legitimately big races in succession.

Up Next: All eyes turn to Charlotte, with the World Finals putting the nation’s best sprint car, super late model and center-drive modified drivers all in the same spot. Coverage can be found on DirtVision.