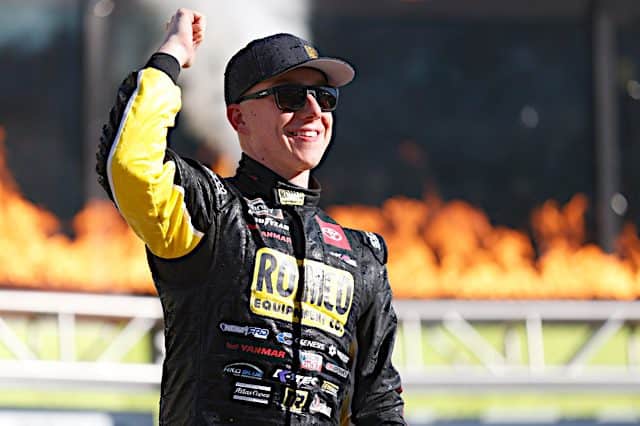 PHOENIX — One year ago, John Hunter Nemechek gambled on himself.

He willingly left an established ride in the NASCAR Cup Series for an opportunity to chase a championship in the Camping World Truck Series with Kyle Busch Motorsports.

Nemechek is 150 laps away from hitting the jackpot.

With five wins on the season in addition to 12 top fives and 15 top 10s, the 24-year-old has rightfully been touted as the driver of the series. The results come in stark contrast from 2020, his rookie season in Cup in which he showed relative speed early but frequent inconsistency late.

Initially, Nemechek wasn’t sure the move would pay off. But it has, presenting him with a chance to collect his first NASCAR championship Friday night (Nov. 5) at Phoenix Raceway.

“It’s been very validating, for sure,” Nemechek said at Thursday’s (Nov. 4) media day. “I think making that decision to come back to compete for wins and a championship has definitely been huge. I think for myself, being able to execute that and take a bet on myself and come out here and win has has been huge for me. I’ve enjoyed this year. I’ve been smiling a lot… have been happy pretty much all year. And that’s a good good way to be.

“It’s a good feeling. And you’re definitely not down in the dumps or miserable or frustrated and people not wanting to be around you. You’re always having fun, and if you aren’t having fun, then you probably shouldn’t be doing it as well. I’ve been told that multiple times so it’s very validating, very rewarding. Now I just got to go cap it off.”

To leave Phoenix with the series’ top trophy, Nemechek will likely need to do something he hasn’t done yet during these playoffs: win.

For as strong as Nemechek began the season, all five of his victories came in the first 13 races of 2021. These postseason, by comparison, has been six races of feast or famine.

His No. 4 team will need to rekindle its regular-season magic Friday in order to celebrate a championship at evening’s end.

“I feel like we’ve been in contention through the playoffs but we’ve had a couple mechanical failures,” Nemechek said. “We’ve gotten wrecked. It’s part of it. But we still run up front. We’ve executed, just haven’t finished where we needed to finish. I feel like I have one of the best teams in the garage. I feel like that we’re still on a high to kind of continue that and I feel good about our chances tomorrow night.

“Yes, the playoffs have been a little bit rocky, but we had issues in the first round, in the second round. Two mechanical failures. Should’ve won Talladega. So, I mean, it’s definitely been a lot.”

He’ll also need to beat a three-time champion in Matt Crafton to win that first title.

Crafton is the lone driver in the sport’s national series to win a championship without winning a race. That possibility is on the table yet again as he chases his fourth.

“[Friday] night would be another interesting way to watch all the keyboard warriors fire up their computers,” Crafton said with a smirk. “Oh, I love it. I don’t respond much to it because sometimes I get in trouble for when I do respond. So I just sit back and laugh and it bothers me zero.”

Ben Rhodes, Crafton’s teammate at ThorSport Racing, finds himself in the Championship 4 for the first time in his Truck career. Rhodes kicked off the season with a bang, winning on both the oval and road course at Daytona International Speedway.

But the victories quickly became things of the past. And while he’s tied with Nemechek and Todd Gilliland for most top 10s in the series, Rhodes’ consistency is what landed him in Phoenix with a chance to race for a title.

“We’ve lost a lot of races this year,” Rhodes said. “We won two of them, which was just great. Still the best season I’ve had yet in NASCAR for me. The morale is fine. I’m just like hyper focused on what’s going on.

“I’ve got a great group of people on our race team. […] And we left the shop this week before we loaded up the hauler. And we all kind of had a toast there, sat down, drank some beer together and said, ‘Look, we’ve had a good year. It’s been the best I’ve had yet. It’s been the best that all of you had yet.’ You know, when we started the season, we were kind of like the little engine that could — like we were all new to each other. Some of us were inexperienced in our respective positions. And we’ve done very well with that.”

See also
Truckin' Thursdays: Why Is Respect an Issue in Truck Series Today?

Finally, there’s Zane Smith, who has already matched his top-10 total from a season ago but only notched two top fives — including his win at Martinsville one week ago to lock in.

He believes he’s already proven himself to prospective owners, a list that includes Chip Ganassi, who signed Smith as a “back-up plan, replacement” for Kurt Busch’s departure before Ganassi sold the team to Justin Marks and Trackhouse Racing Team this summer, Smith confirmed Thursday.

In his #Championship4 media availability, @zanesmith77 confirms to @CandiceSpencer and myself that he was signed by Chip Ganassi Racing as a “back-up plan, replacement” for Kurt Busch before the team was sold this summer. #NASCAR

With that opportunity gone, Smith said he doesn’t know where he will end up in 2022 and doesn’t want to know. All that’s for certain is that nothing is lined up currently, meaning a championship would go a long way in securing future employment.

Good driver, but will he kamakazi himself .

I am rooting for Zane Smith but wouldn’t mind to see Crafton win a 4th, tying him with Ron Hornaday Jr. but John Hunter would be good too (except KBM wins everything).