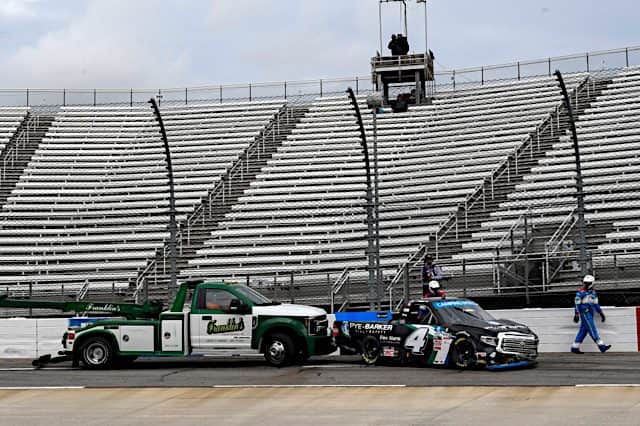 “There’s a complete lack of respect everywhere, all over the place.” – Kyle Busch

Respect. It’s such a simple word, yet it’s become such a hot topic in recent weeks in NASCAR and, more specifically, in the Camping World Truck Series. Coming out of last weekend’s trip to Martinsville Speedway, plenty of drivers left upset with their fellow competitors over a lack of respect on the racetrack.

Perhaps the one that could have ended in the biggest disaster last weekend was when John Hunter Nemechek and Austin Wayne Self tangled. Despite a valiant effort to get his truck rolling so he wouldn’t have to sit out the remainder of the race, the damage to Nemechek’s truck proved terminal and he was forced to wait for the checkered flag to learn the fate of his championship hopes.

Meanwhile, Self danced around saying the move was intentional, though his body language made it clear that it absolutely was.

Austin Wayne Self explains what happened from his view with John Hunter Nemechek. pic.twitter.com/Ma7e9KxSxp

In this case, it ended up working out for Nemechek, though he narrowly missed getting knocked below the cut line and out of the Championship 4.

Another incident of clear payback at Martinsville came between Parker Kligerman and Johnny Sauter. In fact, Kligerman flat admitted he retaliated. The driver of the No. 75 was spun by Sauter with less than 50 laps remaining, and less than 20 laps later, it was Sauter who spun off of Kligerman’s bumper.

“I’m not getting pushed around like that anymore” was the message Kligerman gave across his team radio right after the payback was given. He explained it further during a post-race interview with Frontstretch.

I spoke to @pkligerman about his feud today with @JohnnySauter and his rebound to a fourth-place finish. #NASCAR pic.twitter.com/jM7BhhUSci

Interestingly enough, Nemechek and Kligerman are both right here. I know, it doesn’t make sense, right? Why is one right about intentional wrecking but another one isn’t?

It’s simple really. Playoffs aside, the move Nemechek made on Creed was your traditional short track bump-and-run. It happens all the time where a faster truck gets behind one that’s clearly a little slower and uses the chrome horn to move the slower truck out of the way. No harm, no foul as both drivers get to keep going.

And while there’s absolutely an argument to be made that Nemechek didn’t need to be racing that hard to protect his spot in the Championship 4 given the cushion he had going into Martinsville, he should have a reasonable expectation not to be wrecked intentionally following what was ultimately a racing incident.

On the other hand, when Sauter drove right through Kligerman, there was no attempt at a simple bump-and-run. Instead, it was a matter of one driver clearly lacking the ability to make a pass and shoving the other out of the racing groove to the point he was spun.

Obviously, those weren’t the only incidents this season where drivers have complained about a lack of respect, nor were they the only ones at Martinsville. There was the last lap three wide battle that ended with Todd Gilliland and Stewart Friesen both spinning. We also had the contact between Matt Crafton and soon to be former teammate Grant Enfinger that resulted in Sheldon Creed‘s frustration with Crafton after the race, just to name a few.

With all of that said, though, all of this talk about respect on the track has all become rather exhausting. Part of what drew me to the Truck Series long before the drivers became household names was the beating and banging and the close-quarters racing. It’s also a large part of the reason people say the Truck Series puts on the best racing of the weekend the majority of the time.

But where is the line drawn? Because I certainly don’t want to see that competitive nature taken away from the Truck Series.

“Whip somebody’s ass. After they wreck you, at the end of the day, don’t just talk about it. Do something about it,” Crafton said when asked what the solution to the problem was. “That’s my motto. These guys work too hard, sponsors pay too much money to just get wrecked and show no class like that. Just bust somebody in the mouth and it’ll fix it I think.”

Nemechek’s viewpoint was a bit different than Crafton’s, though.

“I think that or have NASCAR get involved. There’s nothing NASCAR has done. It’s like the 22 (Self) incident,” Nemechek explained. “It’s blatant that he just hooked me in the right rear for no apparent reason and wrecked us. There should be some type of consequence there.

“I view that as the same thing as Joey Logano and Matt Kenseth here at Martinsville. They took each other out, it ruined the playoff deal. How can you view that different? It’s being more consistent with calls and seeing those scenarios.”

What’s the answer here, though? Should we allow drivers to police themselves? Do we need NASCAR to get involved? And for that matter, do we want the sanctioning body to get involved, knowing full well that it’s ultimately going to come down to a judgment call that will leave someone unhappy?

While I understand the complaints from drivers about respect when it comes to flat out dumping a fellow competitor, the fact of the matter is, this sport wouldn’t be near what it is without that beating and banging.

Have our drivers become too soft? Do they really know what they want on the track? It seems like some of them are alright with dishing out the beating and banging but can’t seem to take it when they’re on the receiving end.

But you simply can’t have it both ways.

I think that one of the biggest reasons we see what we’ve been seeing. Is that with a few notable exceptions, the truck series isn’t where drivers expect, or want to build a career. It’s only the first rung on the ladder that most hope will lead to the Cup series. They are so desperate to get noticed, & be successful so they can move up.
For the ones who do make it to the top, they hope to be racing with many of the same drivers for so long that they know they need to show, & hopefully, get more respect. There are drivers who are friends, & others who dislike each other. But they all have to share the same track.

It’s simply a reflection of our current society. Nothing more, nothing less.

Refreshing comments by Parker – honest and direct. It’s a shame Hill bought that RCR ride out from under him. JHN’s comments are illuminating and typical. Not defending what AWS did there, but JHN did get in to him just prior, and then dive bombed the corner and moved up his arc to make it, as if AWS didn’t exist, which is exactly the case in JHN’s mind.