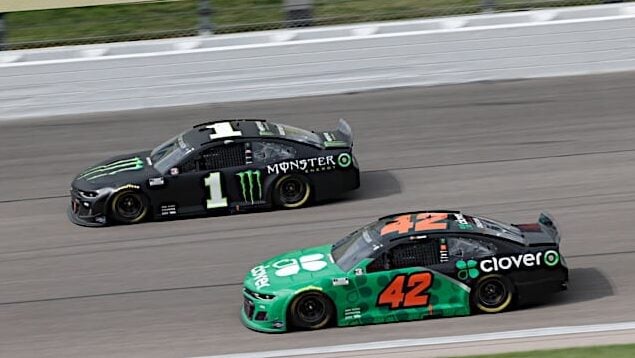 Who will win the NASCAR Camping World Truck Series championship?

John Hunter Nemechek enters Phoenix Raceway with the most wins on the season but as the fourth seed after just barely getting to this round after a late crash at Martinsville Speedway. Nemechek is probably the most aggressive driver of these four and will do anything short of outright dumping a driver to win this championship.

Matt Crafton is one of just two old veterans in this series and has pretty consistently been able to get to this point without winning a race. He’s also never actually won at Phoenix before, so that may be a bit of an issue.

Ben Rhodes has made a big jump this year and has looked very stout. He’s tied for the best average finish in the series and should be able to contend this weekend.

Zane Smith won a do-or-die race at Martinsville to end up getting into the final round of the playoffs. With just two top-five finishes this season, however, he enters Phoenix as the underdog.

Friday (Nov. 5) is a very short race, clocking in at just 150 laps. So the entire complexion of this battle is going to be determined on Friday afternoon in qualifying. Despite Nemechek’s dominance, this year has really seemed like a huge breakthrough for Rhodes, and I think it ends with a championship.

Who will win the NASCAR Xfinity Series championship?

AJ Allmendinger has the most experience of anybody in this field of drivers, but he hasn’t won a series championship since Champ Car Atlantic in 2003. He’s completely reinvigorated himself with his move down to Xfinity and has a chance to finally win another championship 18 years later.

Daniel Hemric still has not won a NASCAR national series race in his career. I don’t think NASCAR usually cares who wins what championship, but I really don’t think it’d be too thrilled if Hemric could actually pull it off without winning again, especially with Nemechek racing the No. 54 Toyota for an owners’ championship in the race as well.

Austin Cindric has spent this season playing with house money. He’s known for over a year now that he’ll be getting promoted to Cup next year, so he’s been able to cut loose and meet expectations to be the championship favorite heading into the race.

This has not been an easy season for Noah Gragson, but it finally seems like the Las Vegas native has grown up a little bit. He’s always had a lot of talent, but immaturity and ego has always gotten in the way of him living up to it. There was probably a point this season where a couple more bad incidents could have cost him everything, but he’s been able to keep his nose clean and it’s paid off.

This is a really tough pick, with Allmendinger and Cindric just feeling like a big heavyweight boxing match. Allmendinger may well teach Cindric one more lesson and win this championship.

Who will win the NASCAR Cup Series championship?

This is a very strong Cup Championship 4, probably the best since the beginning of the format. All four have a decent shot at getting a win, and while one is the favorite, it would not be shocking of any of them step up and win.

Denny Hamlin enters this weekend still looking for that elusive championship. He has tried so long and so hard to just get it that there is almost no question now, stats-wise, that he has passed Mark Martin when it comes to modern drivers unable to win a championship. He’s been the most consistent driver this season and spent the entire regular season fighting for the points lead, but now he’s going to have to win to get this championship.

This is Martin Truex Jr.’s fifth Championship 4 appearance in the last seven seasons and his first with crew chief James Small. Truex won at Phoenix in the spring and has performed very well on 750-horsepower tracks this season, with all of his wins coming with this much power being generated by the engine. He’s probably the driver getting the least amount of notice in the Championship 4, but anybody paying attention knows not to count this driver out.

Chase Elliott will end his season as defending champion attempting to be the first driver since Jimmie Johnson to win multiple championships in a row. Elliott is the only champion to win at Phoenix under this format, so he knows exactly what he needs to do all weekend to win the championship again.

And then there is the favorite. Sitting out most of last year after being suspended for using a racial slur at an iRacing event, Kyle Larson has orchestrated one of the greatest comeback seasons in NASCAR history. Few questioned the driver’s talent, but there were plenty who did not think he would get this far in his first season at Hendrick Motorsports.

Last season, there was so much talk among the dirt racing crowd of just how amazing Larson was. And he was truly incredible, for the record. Some argued that Larson was the best driver in the country. By virtue of his championship win, technically Elliott was the best in the country as champion of its biggest racing series. Now that both are on even ground a year later, this just screams big fight feel. With all of that being said, the edge probably goes to Larson.

Who is saying goodbye after this season?

There are not that many announced retirements in NASCAR this season. Michael Annett is retiring from full-time competition, but that’s about it.

Ryan Newman will leave RFR after a fairly non-newsworthy tenure in the No. 6 Ford, outside of his infamous 2020 Daytona 500 wreck. Newman has not announced plans for next year, and with spots filling up in Cup, this may well be his final season in the series.

Chip Ganassi Racing will be shutting down its NASCAR arm after a deal too good to pass on from Trackhouse Racing Team to be bought up. Ross Chastain, after a pretty OK first season in good Cup equipment, will be staying in the building with Trackhouse, as Kurt Busch moves over to 23XI Racing.

CGR in NASCAR was, in a word, inconsistent. It could perform well on the big stage and would once in a blue moon be somewhat competitive for a championship. But there were always issues popping up for the team, with it wasting the Cup career of Juan Pablo Montoya with very unreliable cars in his tenure there.

It’s unclear what Ryan Preece’s future will be, with JTG Daugherty Racing closing his team down as it focuses on Ricky Stenhouse Jr. in 2022. Preece doesn’t have many Cup options, but he should have plenty if he moves down to the Truck Series or the Whelen Modified Series.

Finally, if we are saying goodbye to people, I guess I should mention that I myself am leaving NASCAR coverage on this website in a couple of weeks to focus on other racing series. Thank you for reading this column under my pen over the years.

wrecky stenhouse over preece? flabergasted. but jtg is not close to competitive. good riddance.
hope ryan can land a somewhat decent ride that suits his talent.
if not, back to the modifieds where real racing happens but for lower cash.

Well Mr. Finley, I have enjoyed your column for years and wish you the best and just hope you aren’t covering Bormula-1.