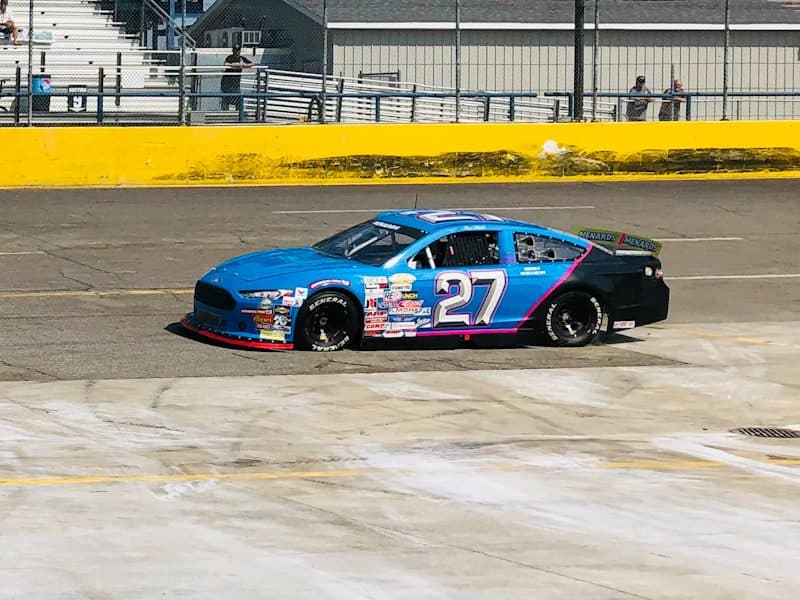 The 2021 ARCA Menards Series season was a career best for Alex Clubb. The Morris, Ill. native partnered with David Richmond and his son, Tim Richmond, to form Richmond Clubb Motorsports. As one of the drivers, Clubb registered a career-high seven races en route to a career-best 21st place finish in the point standings.

After the ARCA race at the Milwaukee Mile, though, Clubb and the Richmonds parted ways, ending Clubb’s season. The split left the young driver frustrated.

“When you get f**ked over, it leaves a bad taste in your mouth,” Clubb told Frontstretch. “You got two options. You can either walk away or you can push forward. I’m one of those guys that stick with it to push forward.”

I found out tonight I won't be in the #27 for the remainder of the 2021 season. It was a hell of a time this year with two top 10 runs! I want to thank my family, fans, friends, sponsors and our awesome crew for all of their hard work and dedication. pic.twitter.com/nal6w43SJC

Staying undeterred, Clubb will revert to owning and driving for his own team, Clubb Racing, Inc. in 2022. Clubb himself will drive the No. 03 in four ARCA races: Phoenix Raceway, Iowa Speedway, Michigan International Speedway, and at Milwaukee. Depending on whether another sponsored driver joins the team, Clubb may drive in four more events.

Clubb is working with a bunch of different drivers to fill more of the team’s 2022 schedule. Ideally, Clubb would like to field the No. 03 for the whole season, setting them up for extra ARCA money for 2023. For 2022, the team will run without any owners’ points from this year, costing them financially.

Currently, Clubb has one driver who is interested in running the season opener at Daytona International Speedway and Talladega Superspeedway. If that driver indeed competes, Clubb is hopeful his team will run the full season with three-to-four-person rotation, some of them pay-to-play drivers, splitting the 20-race schedule.

On November 5, Clubb announced the first driver to join his team for next season: Rita Thomason.

Rita Thomason has signed on to drive four races for Clubb Racing Inc. in 2022 Thomason a Police Sergeant from…

The Tuscaloosa, Ala. native has never actually competed on ovals before, as she began her unique journey within racing on road courses.

As a result, Clubb will field Thomason in a few super late model events at Grundy County Speedway in Morris, Ill. Grundy is a NASCAR-sanctioned track, so Thomason will compete there to earn her ARCA license to compete at the smaller tracks and road courses. Clubb is excited about this partnership.

“We met her at Talladega,” he said. “She was there with the Praytors. We had a conversation, and everything clicked. I wanted to help her get into the sport. She wanted to run really bad, so we put a program together for her, something that was affordable to do.”

Thomason owns her own equipment of an ARCA car with a Legacy motor. Clubb has one race-ready car, while another one of Clubb’s chassis is being converted from a steel body to a composite body. Clubb also owns a second car, though it is currently a steel body, therefore ineligible for ARCA competition. Under the hood of Clubb’s car is an Ilmor engine, which cost $42,000 to fix after it blew when Clubb used it at the Illinois State Fairgrounds race.

In addition, Clubb is in the process of acquiring a Legacy engine for the second car for $6,000. It is cheaper to field a car with a Legacy engine instead of the better-performance Ilmor.

There is no guarantee Clubb will field his team for the full season. When they’re at the racetrack, Clubb expects his No. 03 to be a 15th-to-20th place car.

“I don’t want to make the drive to the track to go start and park,” he said. “I want to be a race team that races. We might not be competitive, have new tires, but we want to run as good and respectable as possible.”

Although Clubb has not yet finished on the lead lap, only two of his 10 DNFs were via on-track incidents while the others were due to mechanical issues.

With a new pit crew assembled, Clubb gained valuable knowledge from his time atop the pit box as a crew chief for Richmond this season. “Every time we made an adjustment,” he said. “We went faster, so we know we made right decisions and we were going in the right direction.”

At this point in his career, Clubb knows he is not destined to become a NASCAR driver. He owns a business, is a local politician, and has a family. ARCA is the best series for him.

“As long as I am around, I would like to be in the ARCA series,” he said. “I am not looking to move up. I am 30 years old and where I am currently at, 20 races is a good schedule. Once we get on a plan, if we make all 20 races, then we will be at every race for the foreseeable future. You get to run all the neat tracks, you get the TV coverage so if you are able to attract a sponsor, it’s a good series to be in.”

Nevertheless, Clubb still has dreams for his ARCA career.

“Down the road, I’d like to be a top-five car,” he explained. “It takes time, patience, money, and trial and error. My end goal is to win a race. Where we are at, though we do not have a snowball’s chance in hell. We need to be able to run on the lead lap first. We are not horrible, but we are not close there. We don’t have a lot of money so we’re limping around doing the best we can.”

Make no mistake. While there are still unknowns for Clubb’s team headed into next season, he will run it as a hard-working professional ARCA team.

“I’m going to run it like a real business,” he said proudly. “We’re going to pay people to help, we’ll be taking in money from people that are driving. It’s hard to be a professional race team unless you’re running it like a legitimate business.”

Alex has a bad attitude and no fun work with. His pit crew wouldn’t work for him anymore. Rita could be better with out him. I help setup his car this year. Alex the whiner

Alex Clubb made your program better by spending HIS MONEY to travel and help Timmy become a better race car driver, this can be proven on a etch-a-sketch. You guys fell apart following his departure. Don, you did nothing more than cook and do small stuff around the car at best, not even turning a jack bolt Mr. “Shop Manager” lol. If Alex is such a bad race car driver, how did he give your operation it’s best finish of the season (8th)…

Alex spent no money to help this team. Brad and I set up his car for every race. Alex did nothing. His attitude got him fired. His pit crew couldn’t stand him anymore.

Don I really don’t know what your problem is with Alex he is a great person and a great driver! He has won a lot of races and championships. He is a hard nosed old school racer that doesn’t take any crap on or off of the race track! I’ve seen him take care of business on the race track on more than one occasion! It sounds like you are jealous of him going back on his own and racing… If you guys were smart you’d quit poking that bear he can defiantly hold his own on and off the track if push comes to shove!

Alex might a good driver years ago. Being with him this year, he was irrational and some times a asshole. He did nothing expect complain
That why he got fired! He be nuts to attack me.

The cash came Zachary’s fund me campaign not his father. The cash barley covered the cost of the race. Alex is spoiled big ass punk!

What a bad and uneducated take, Zachary had ZERO money from family, especially after his dad’s stroke. His family had to raise money on a GoFundMe and sell off his Late Model equipment just to keep racing at all, he’s not even close to rich.

good, hopefully his dad has another stroke so he can’t race.

If his dad another stroke. I will make sure that Zachary will drive again! We have a car for him. 27

hope this means great things for everyone involved! I wish luck to them