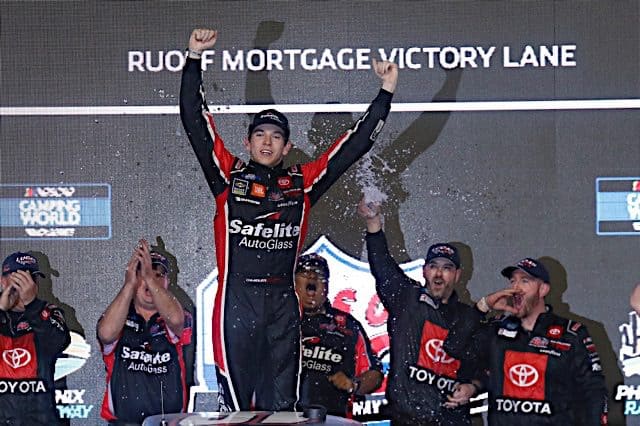 Chandler Smith swept both stages and scored his second career victory in Friday night’s Lucas Oil 150 at Phoenix Raceway, just one week after being eliminated from playoff contention.

Capped it off with a bow ? pic.twitter.com/uaCHfA476g

Stewart Friesen finished second, and Ben Rhodes, who was the highest running Championship 4 driver for the majority of the race, finished third to claim the 2021 NASCAR Camping World Truck Series Championship.

“I can’t even breathe,” Rhodes said. “That was the hardest last 40 laps I think I’ve ever driven in my life.”

“We brought it home and won it. I don’t even know what to say, this is crazy!”

Sheldon Creed, who led 106 of 150 laps in his final start for GMS Racing, finished fourth, while championship runner-up Zane Smith finished fifth after being passed by Rhodes on lap 141.

“I was eight laps away from winning the championship,” Smith said. “I was so helpless. I couldn’t get my truck to turn no matter what I did.”

Part-time driver Christian Eckes ended up sixth, followed by John Hunter Nemechek, who spent the first two stages off the lead lap after contact on lap 1. Todd Gilliland was eighth, while Carson Hocevar finished ninth. Austin Hill, in his final race with Hattori Racing Enterprises, rounded out the top 10.

After starting side by side on the front row, Chandler Smith immediately lost the lead to Creed but the duo swapped the top spot for all but five laps, which were led by Friesen.

Lap 1 brought chaos as the field fanned out in the dogleg, and playoff contender Nemechek suffered left side damage from contact with Kris Wright, along with right side damage from smacking the wall. The contact dropped him outside the top 20 before disaster struck and the driver of the No. 4 Toyota was forced to pit for a flat tire under green, putting Nemechek two laps down and last in the championship battle.

A caution a few laps later for a crash by Lawless Alan gave Nemechek one of those laps back, but it took until stage three before he was able to rejoin the lead lap once again, despite running lap times as fast as the leaders.

For much of the race, Rhodes was the top playoff driver as Zane Smith and Matt Crafton struggled with the handling of their trucks and Nemechek was trapped a lap down. Once Nemechek got back on the lead lap, he quickly gained eight positions but lacked the track position he needed to be a threat to win the championship. Meanwhile, Crafton’s truck never really came to him, leaving Zane Smith and Rhodes to battle it out for the championship.

With 41 laps remaining, Zane Smith moved to third in the race and first in the championship battle and held that spot until Rhodes tapped his back bumper and made the pass with just 10 laps remaining. Rhodes held on to win his first career title and the first owner’s championship for ThorSport Racing.

Zane Smith finished second in the championship, followed by Nemechek and Crafton. Race winner Chandler Smith did just enough to edge out Carson Hocevar for the Rookie of the Year title.