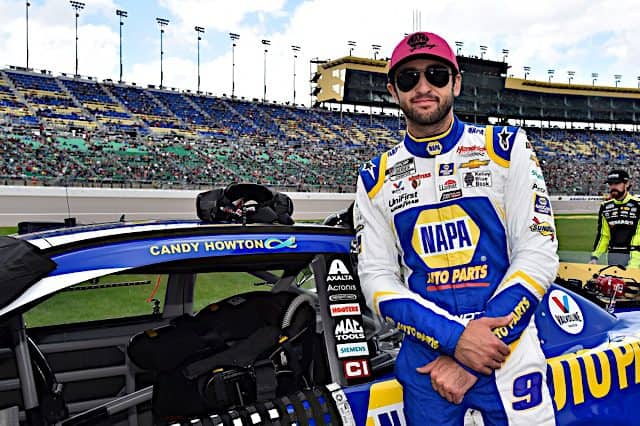 It all comes down to this. Four NASCAR Cup Series drivers will race for the 2021 championship at Phoenix Raceway on Sunday, Nov. 7. Let’s get your daily fantasy NASCAR DraftKings lineups set for the final time in 2021.

Kyle Larson, Martin Truex Jr., Chase Elliott and Denny Hamlin are the playoff drivers eligible to win the title. Any one of them can be the lynchpin for your roster as the title contenders tend to finish up front: they ran 1-2-3-4 in the finale last year. The remainder of the 39-car field will still be battling just as hard, trying to bring home a victory to close out their season.

It’s the second year in a row the championship race is being held at Phoenix’s one-mile flat oval. However, it’s the first time in over a year that practice will happen at the desert track. In last season’s championship race, the lineup was set by the performance metrics formula, so all four title contenders lined up in front (though Elliott had to drop to the rear before the start). This year, there will be qualifying, too, held Saturday at 7 p.m. ET with television coverage from CNBC.

There’s been other practice and qualifying sessions this season, though most of them were at new track layouts. The last oval that held actual qualifying was Nashville Superspeedway; Aric Almirola won the pole for that event.

Sunday also marks the end of an era in the Cup Series. Next season, teams will run the Next Gen cars starting at the L.A. Memorial Coliseum in the Busch Clash.

Before I share my last picks of the season, let’s review the NASCAR DraftKings results from Martinsville Speedway.

Ryan Preece had a brake issue that sidelined him late in the race, resulting in a 36th-place finish. Tyler Reddick, meanwhile, struggled on speed for much of the day and ended up right where he started. Almirola, Erik Jones or Chris Buescher would have been better options, as they all finished inside the top 10.

285.05 fantasy points were needed to win $1.50 in the $1 Happy Hour tournament. This lineup just barely won in the large $1 double up contest.

Here’s how the drivers score fantasy points on DraftKings. Each fastest lap is worth 0.45 points, while 0.25 points is awarded for each lap led. First place gets 45 points. DraftKings has also put more emphasis on drivers who finish inside the top 10 and top 20. For example, the gap between 10th and 11th is now two points instead of one: 10th gets 34 points, while 11th gets 32, etc.

After a tremendous season for Larson and the No. 5 Hendrick Motorsports camp, how could I not choose him for the season finale? He’s won nine races so far, including four in the playoffs. Although he’s won primarily on 1.5-mile courses, it doesn’t mean Larson isn’t good on the shorter racetracks, too. In fact, he led 77 laps last week at Martinsville Speedway before speeding penalties sent him to the back before restarts. He probably played things a bit more conservative then since he was already locked into the Championship 4.

Additionally, Larson was out front for the majority of the race at Dover International Speedway when Hendrick swept the first four positions. Then, this fall at Bristol Motor Speedway, Larson led 175 circuits en route to a stirring victory over Kevin Harvick.

Even though he hasn’t won at Phoenix yet, Larson posted the second-quickest 10-lap average among the 22 drivers that went for 10 straight laps during Friday’s practice. Larson is running the same chassis he had in the spring when he recorded 45 fastest laps, so it should have no problem staying out front on Sunday.

Elliott won the race and the championship last year, even after dropping to the rear due to inspection failures. His No. 9 held the top spot for 153 laps in the fall and 93 laps last spring. Earlier this year, he finished fifth, failing to lead a lap but still running consistently inside the top five.

The Dawsonville, Ga. native may have only two victories this season, but he’s still been good on some of the shorter racetracks. At New Hampshire Motor Speedway, a flat track similar to Phoenix, he led 53 laps but wound up a lap down in 18th at the rain-shortened event.

Elliott started showing his strength in the Round of 16, leading 58 circuits at Richmond Raceway and 129 at Bristol. We all know what happened in the closing laps then; contact from Kevin Harvick cut down his tire, leading to a big dispute between the pair.

Still, Elliott proved last week why he is a contender. He led 289 laps at Martinsville and snagged the second spot in the Championship 4 by the end of stage two. Despite fading to 16th, he still scored 128.9 fantasy points on NASCAR DraftKings. I expect him to perform well and run at the front of the field this Sunday.

Wallace earned a top 10 in the desert way back in the 2018 playoff race when he drove for Richard Petty Motorsports. However, that was the only top 10 he’s earned so far at Phoenix. Earlier this year, he gained nine positions to run 16th with his new team 23XI Racing. He duplicated that performance in the first Martinsville race and brought home an 11th at Dover.

Wallace’s DraftKings salary is low enough that you can fit the higher-priced drivers with him. Keep an eye on where he qualifies, though to see if the No. 23 car is truly worth rostering.

I had a hard time deciding whether to play Almirola and Anthony Alfredo over Dillon and Chase Briscoe. Ultimately, Dillon’s consistency drew me to the No. 3 Richard Childress Racing driver. Aside from a couple of finishes in the 30s, Dillon’s results have mostly been 15th or better. This trend often translates into fairly good NASCAR DraftKings scores. In each of the last three races — Texas Motor Speedway, Kansas Speedway and Martinsville — Dillon scored between 32 and 38 DraftKings points.

Unfortunately, Dillon hasn’t been as strong at Phoenix; he has just nine finishes of 20th or better there. That total includes an eighth in fall 2018 and a ninth in the spring 2016 race. Still, as long as he doesn’t qualify inside the top 10, Dillon should score well on NASCAR DraftKings with a little position differential bonus attached.

In 2021, Buescher’s shown more muscle on the 1.5-mile courses, like at Kansas two weeks ago where he finished 12th. But the Roush Fenway Racing driver has some other good results at tracks that use the higher-horsepower package, too. He crossed the line ninth at Darlington Raceway this fall after starting 34th. Then, last week at Martinsville, he matched that Darlington result and scored 41 fantasy points on DraftKings.

Alas, at Phoenix Buescher has never run better than 16th, which happened in both races in 2019. The good thing is he hasn’t finished worse than 20th in the last six events held there. While it’s unlikely he’ll earn a top-10 result, another finish in the teens is definitely possible. Take advantage of Buescher’s lower salary for the final time this year.

The main reason why I chose Briscoe over Alfredo was because Briscoe’s DraftKings scores and on-track results have been better than Fast Pasta as of late. In the last two months, the No. 14 Stewart-Haas Racing driver has scored 20 or more DraftKings points in each race since Darlington. He was 16th at Richmond in the fall and 13th at Bristol; both results were several spots further up from where he started. This inexpensive salary leaves a lot of room for the top-tier drivers you’ll need to cash in.