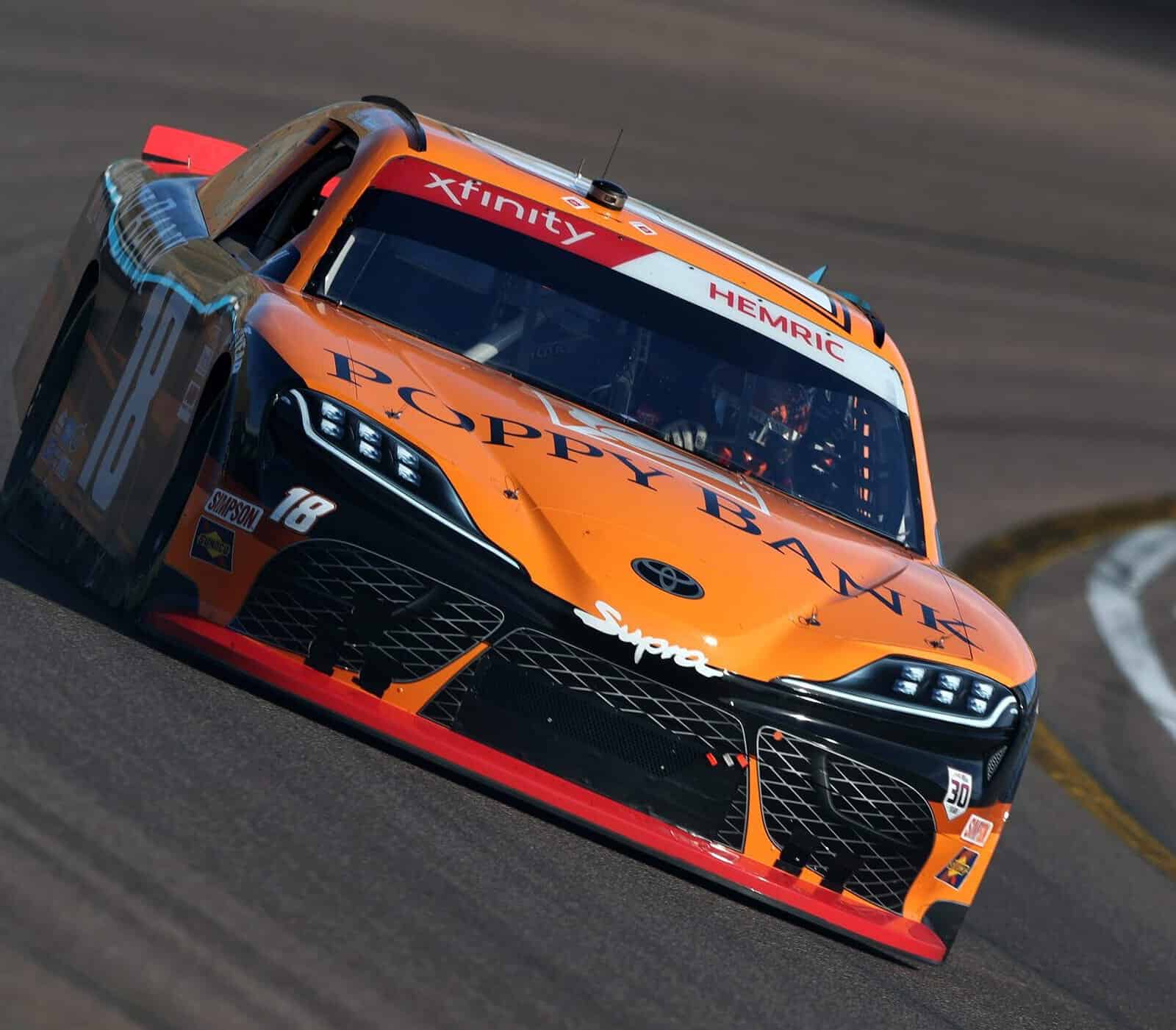 Hemric, who had been off his phone and “off the radar” during the buildup to the Xfinity Series’ championship race on Saturday (Nov. 6), hadn’t heard anything.

“He brought me up to speed,” Hemric told Frontstretch.

In fact, Hemric’s quest for his first NASCAR championship had hit a large speed bump in the middle of the night.

The hauler carrying Hemric’s No. 18 Joe Gibbs Racing Toyota Supra broke down after it struck a deer carcass. The dead animal cut a fluid line on the hauler, causing it to be stranded near Abilene, Texas.

It wasn’t a thousand miles from nowhere, but it was almost that far from Phoenix Raceway.

Hemric’s car was then put on an alternative trailer around 3 a.m. CT in Texas. The driver’s PR representative wasn’t even sure who the trailer belonged to, describing it as being owned by a “friend of a friend of a friend” who was in proximity to the team hauler.

The majority of Friday was spent waiting to see if Hemric’s car would make it the roughly 900 miles to Phoenix Raceway. The series’ lone practice session was scheduled for 3 p.m. local time.

“All you can do is lose sleep over it,” Hemric recalled Rogers saying. “He said ‘we control what we control.’ The hauler getting here is not anything we can control.”

“You’re just making a plan for all the scenarios,” Hemric said. “Fortunately, everybody involved busted their tails to get here and get it here in time.”

The white truck and trailer pulled into Phoenix Raceway around 2:30 p.m. Hemric was able to pull out onto the one-mile oval with the rest of his competitors.

Hemric car unloaded about 35 minutes before the start of NASCAR Xfinity practice in Phoenix. #HotPass pic.twitter.com/U9OBDCVO8O

At the end of the 50-minute session, Hemric had posted the third-fastest lap.

In a year where anything and everything has seemed to prevent Hemric from getting to victory lane, did a dead deer in Abilene, Texas feel like the one last attempt by the universe to wrong him?

“Not at all, man,” Hemric said with a laugh. “I don’t get caught up in all that. … Things don’t go your way, it’s not from a lack of effort or not showing up. Showed up and so did the car. Seems like a normal day now.”

With less than 24 hours until he gets a shot at a Xfinity championship, where was Hemric’s mind?

After debriefing with Rogers, he would join his family, friends and supporters for a championship-eve dinner.

“I’ve been waiting my whole life for this moment,” Hemric said. “We’re going to go enjoy the night and appreciate the moment.”

They were heading to a “little Japanese restaurant” his wife had picked out.

Hemric wasn’t concerned about his potential championship being derailed by a bad meal.

“Got a billy goat for a stomach,” Hemric said. “That’s what my wife says, so I’m sticking with it.”

The NASCAR Xfinity Series Championship Race can be seen live on NBC Sports Network at 5:30 p.m. ET on Saturday, Nov. 6.