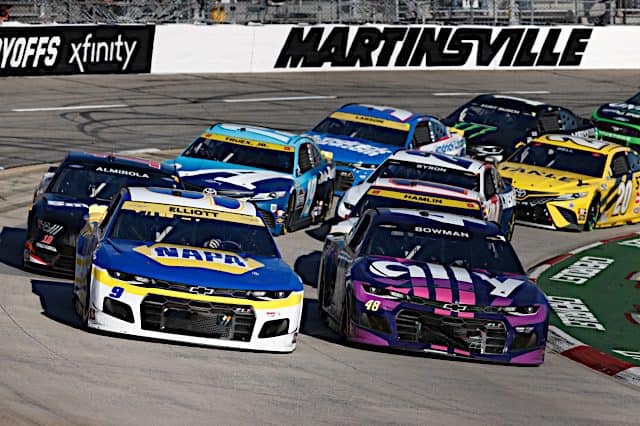 Is this the most competitive Hendrick Motorsports has ever been?

Luken Glover: One can certainly make that argument. It isn’t a head-and-shoulders advantage, but this NASCAR Cup Series season is right there as one of the best. If a HMS car wins this week, it will tie its 2007 record for the most single-season wins in the organization’s history. Looking at 2007, Jimmie Johnson, Jeff Gordon, Kyle Busch and Casey Mears combined for 18 wins, 57 top fives and 84 top 10s. In 2021, the four HMS drivers have tallied 17 wins, 53 top fives and 81 top 10s. Don’t forget their 1-2-3-4 finish at Dover International Speedway, either. This is undoubtedly at least a top three season in the team’s history. And the group may get even better in the coming years.

Stephen Stumpf: Yes. Sure, Hendrick was lights out in the late 1990s with Gordon and the late 2000s with Johnson’s five-in-a-row streak, but Hendrick looked dreadful just three seasons ago. Its turnaround has been remarkable, and it has all pulled off one of the greatest rebuilds of all time. In 2015, the team consisted of Gordon, Johnson, Dale Earnhardt, Jr. and Kasey Kahne. All four of them were heading toward the end of their careers, and Hendrick has managed to find talented drivers to replace all of them. Every driver in Hendrick’s lineup is in their 20s, too; compared to other great seasons like 1998, 2007 and 2009 that felt like the peak, 2021 only feels like the beginning for Hendrick.

Jared Haas: While Hendrick had some good runs with Johnson and Gordon, Hendrick as a whole team is the most competitive this year. Over the years, Hendrick and other teams had difficulty producing four competitive cars at once. Recently, Hendrick has built a pattern of success that all four drivers can achieve.

Dalton Hopkins:  If William Byron wins this weekend at Phoenix Raceway, it’ll be the first time the team has ever gotten multiple wins from four drivers in its history. Let that sink in. That includes the years where it had Mark Martin, Gordon, Johnson and Earnhardt. It’s won 16 out of the 35 point races ran throughout the year. With the breakout year of Alex Bowman and the successful return of Kyle Larson, HMS drivers could not have peaked at a better time.

Daniel Hemric will compete for the Xfinity Series title without having won a national touring series race. Is that a problem?

Stumpf: Matt Crafton won the 2019 Camping World Truck Series championship despite winning zero races and leading 44 laps all season. That is far more of an issue than anything Daniel Hemric has done this season. Hemric has led 615 laps in Xfinity this year, and he has been incredibly unlucky to not have a single NASCAR win to his name. This isn’t even his first Championship 4 appearance either, as he competed for the Xfinity title with Richard Childress Racing at Homestead-Miami Speedway in both 2017 and 2018. He belongs.

Hopkins: I’m not sure why this is surprising to some. This is not the first time Hemric has been in the Championship 4 and it won’t be the last. It’s not like it would be the first time it’s happened either. Crafton won the Truck championship in 2019 and didn’t win a single race. That being said, it would be something else if a driver could say they’ve won a championship before winning their first race.

Jesse Johnston: No, not at all. Austin Dillon‘s 2013 Xfinity championship and Crafton’s 2019 Truck championship weren’t met with that much scrutiny. So there’s no point on looking at it that way if Hemric indeed pulls this off. If he were to remain with a goose egg in race wins but still be a champion, that will be even more remarkable than Dillon’s or Crafton’s championships. Fortunately he will remain with a strong team next year in Kaulig Racing. But if a race win isn’t in the cards (again) for him this weekend at Phoenix, he will really need to bank on Austin Cindric, AJ Allmendinger and Noah Gragson all having problems.

Glover: It would be a problem if Hemric were an inconsistent driver. However, while he is known for not having that breakthrough win yet, he is also known for his consistency. Fellow title competitor Cindric even defended his record the other day. This is a guy who consistently leads laps, wins stages, runs up front and doesn’t make many mistakes. It is unbelievable just how many things have gone against him in his career. Hemric is now three for three in making the Xfinity Championship 4 in full-time seasons, proving he knows how to get here. Does Hemric deserve to be here? Absolutely. There is a strong argument to be made that he needs to earn that first win this weekend in order to claim the title, however.

Which Cup driver will be the happiest to see this year come to an end?

Johnston: Although Kevin Harvick would be a strong choice, I’m going with his teammate, Cole Custer. In his Rookie of the Year award-winning season last year, he scored the big upset win at Kentucky Speedway, along with two top fives and seven top 10s. This year, his best finishes are a pair of 10ths at Dover and Talladega Superspeedway. He sits 26th in the standings with an average finish of 21.5. Based on what his stats say, his 2021 season has got to be among at least the worst sophomore slumps in NASCAR’s modern era. After Phoenix, Custer should relax and reflect as much as he can during this coming offseason. He’ll definitely have a lot to prove in 2022.

Haas: Anyone in the Stewart-Haas Racing camp wants 2021 to be over, including Harvick. From being the most winningest driver in 2020 to be being shut out of victory lane in 2021 thus far, Harvick’s season has to be a disappointment. Harvick has also accumulated the least laps led during his tenure with SHR and lowest since 2009.

Hopkins: It’s been a nightmare year for Harvick. In fact, I imagine the whole SHR team is ready to move on to the Next Gen car. After winning eight races in dominating fashion in 2020, Harvick still has not gotten that first win of 2021, though of course he still has one race left. Regardless, a race team that earned nine wins in 2020 to only earn one the next year should raise a red flag. Something happened to that team, and I’m sure it’ll be spending the entire off season figuring out what, if it hasn’t already.

Who will be the three series champions when the dust settles next week in Phoenix?

Haas: The Cup Series has been Larson’s playground, and it is Larson’s year to win the championship. On the Xfinity side, Cindric has performed well at Phoenix with a win last year and this year. The No. 22 team will be back-to-back Xfinity champions. If John Hunter Nemechek can stay out of trouble, he will be the Truck champion.

Glover: All three series are going to have competitive battles, and nearly every driver makes a good case to win it all. In the Truck Series, it’s too risky to go against Nemechek. Despite some hiccups in the playoffs, he has to be the favorite going in, and he will prove why he is. In the Xfinity Series, I’m going with Hemric to overcome the odds. This is his best opportunity to win the title, and it feels like the team has more fuel than ever after a close call at Martinsville Speedway. In the Cup Series, Larson. In all of the chaos involving Denny Hamlin at Martinsville remains the fact that Larson won the first two races of the Round of 8. Phoenix is no slouch of a track for him, and he will close out a dominant season with a title.

Stumpf: Unless KBM lays an egg at Phoenix, it is John Hunter Nemechek’s title to lose. He hasn’t won since Pocono Raceway in June, but he has had the most impressive season, and his biggest title threat in Sheldon Creed is out; the seas have parted for him to win it all this weekend. For Xfinity, Cindric. He won the championship at Phoenix last year and dominated there in the spring. Cup is tough. Larson has had the most dominating season by far, and Hendrick has been head and shoulders above everyone else all year. But despite Larson’s excellence this season, Chase Elliott is better at Phoenix and won there a year ago. For Joe Gibbs Racing, Martin Truex Jr. has been feast or famine all season, but he won the spring race at Phoenix and Gibbs has looked strong at most of the 750-horsepower tracks. And then there’s Hamlin, who also looked good at Phoenix in the spring. Will his dustup with Alex Bowman at Martinsville give him extra motivation, or will it only cause distractions on Sunday? At the beginning of the playoffs I predicted Larson to win it all and I will stick by it, but it is far, far from a guarantee.

Johnston: For the Truck Series, Smith. Last year, he could not pass Creed on the final restart for the championship and also lost the 2018 ARCA Menards Series crown to him, so this year, he’ll be sure to get redemption. Then Allmendinger for Xfinity, and for Cup, Hamlin. After the latter’s Martinsville fiasco with Bowman, the fanbase isn’t really on his side. But with his back against the wall, this will be his best chance to prove his doubters wrong and take all the glory on Sunday. It has been 11 years since his tough 2010 loss to Johnson. Perhaps the stars may finally align for him this time.

Can’t say for the trucks; I don’t watch them very often. I’ll go with Dinger in Xfinity, and Larson in Cup. That’s who I’m pulling for, anyway. I really think that this year both series have the strongest contenders, top to bottom, we’ve seen since the current playoff format was implemented. Really, any of the contenders in Xfinity or Cup could win their championship race, and it wouldn’t be a shock. I’m really looking forward to this weekend.

First off, I think another good question for debate would have been; Does it make sense to have practice and proper qualifying when this was not the way it was done all year?
In the Cup series I am for Larson (and think he deserves it) but will settle for ABH.

I got kicked out of school for throwing a bucket of water on the referee after the basketball game. I rode my motorcycle for 3 days. Larson got kicked out of Nascar and went and played in the dirt for a year and had a ball while winning half his races. Sometimes time outs aren’t bad at all.

Definitely worked out well for him. It was just a matter of time before he went to one of the premier team. Gee, remember that episode of Seinfeld where George was working for the NY Yankees and the Mets wanted him to get fired on purpose? I wonder if the same dynamic was at work when Larson committed his special crime. It got him “fired” from all his NASCAR commitments and he had a clean slate to be hired by whomever would have him (probably at a bargain price too). Nah. That would be too incredible.

Im really glad Larson got the chance to go to HMS. And I bet there was no way Jeff was going to let him go elsewhere $$$$$