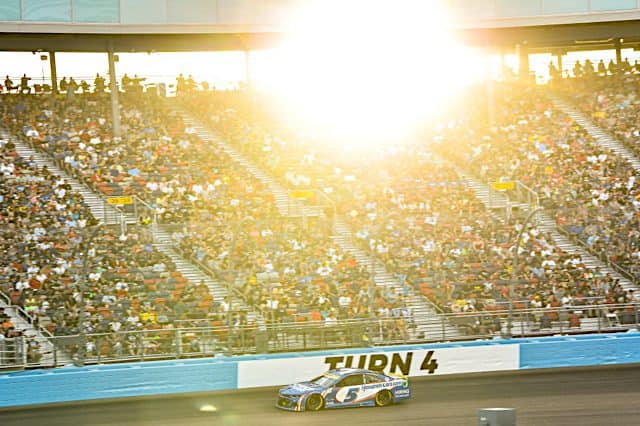 Editor’s Note: This article on the NASCAR Season Finale 500 is posted in collaboration with an outside sponsorship client. The opinions and information contained within do not necessarily represent Frontstretch and its staff.

Since the dawn of modern human civilization, we have been obsessed with racing each other to prove who is the fastest. This odyssey began on foot, with events such as the marathon occurring in the ancient Olympics held in Greece. Not long after that, chariots were developed and strapped to horses, so men could race each other at much greater speeds, which not only made it more of a spectacle but also increased the danger. From there, it developed slowly until the late 1800s, when the automobile was invented and slowly began being introduced into wider society.

The first evidence of a pre-arranged race between two road vehicles happened in England, on August 30, 1867 between Issac Watt Boulton and Daniel Adamson. Boulton was the victor over the 8-mile course, going down in history as the first-ever race winner. From there, the world of auto-racing has changed so much that it would be almost unrecognizable to Boulton and Adamson if they were around today.

In the United States of America, the most popular form of auto racing is the National Association for Stock Car Auto Racing, or NASCAR for short. It has its origins in races held on Daytona Beach in Florida in the 1920s and 30s, holding its first official races during 1948. In the following 73 years, the sport has become hugely popular, mainly in North America, but with fans all over the world, too. In fact, before and during each NASCAR event, thousands if not millions of people will search for the sports betting stats on each race to see what kind of odds they can get on their favorite drivers or teams emerging victorious. Always search for a reliable website like Fanduel Sportbook which now has odds for the NASCAR Cup Series, the highest racing series within the sport.

The highest-rated series within the sport is the NASCAR Cup Series. The races that make up the series are the most popular with the fans and attract top stock car drivers from all around the world. The 2021 edition of this division began back in February with their biggest race on the calendar, the Daytona 500. The race was won by Michael McDowell, who races for Front Row Motorsports, scoring the first victory of his Cup career in a major upset.

There were a further 25 events in the Cup season before we entered into the NASCAR playoffs. With only one race left in the current campaign, the Season Finale 500, we thought it would be a good time to recap what has happened in the postseason and try to predict the outcome of the final event in this thrilling NASCAR Cup Series.

How do the playoffs work?

If you aren’t an avid watcher of NASCAR, it might be a little complicated to understand just exactly how the playoffs, and the point scoring in general, actually work. To recap, points are awarded according to where the drivers finish at the end of the race. Fairly straightforward so far? They can also get bonuses as the race is split into three stages. The stage winners for the first two stages get a playoff point apiece while the top-10 finishers get points that are added to their overall total.

Then, after 26 races, the 16 drivers who have accumulated the highest number of points are then seeded based on their total number of wins. They face off in 10 playoff races, an elimination-style format to determine who is the 2021 Cup Series champion.

Who has been looking strong so far?

During the regular season, and into the playoffs, Kyle Larson has been the man to beat. He was far and away the best driver competing between February and October, winning nine races and leading 2,474 laps. Not only that, but he also recorded 19 top-five finishes and 25 top 10s. The man from Elk Grove, California, who previously won the 24 Hours of Daytona race in 2015, has been impressive in his comeback season after missing all but four races in 2020.

Behind him is fellow Hendrick Motorsports Chevrolet driver Chase Elliott. Whilst Elliott only won two races during the first 35 events of 2021, he led 858 laps and won six stages. While he’s a bit off Larson’s frenetic pace, NASCAR’s Most Popular Driver has finished second a number of times so far, doing enough to qualify for this year’s Championship 4.

What will happen in the showdown at Season Finale?

The final race is held at Phoenix Raceway in Phoenix, Ariz. on Nov. 7. Elliott and Hamlin have won the previous two fall races at this track, so they will certainly be hoping to challenge for the race win this year as well. However, given just how strong he has been all season, we should expect to see another Larson victory here, which will cap off his 2021 NASCAR season perfectly.

Can anyone stop him? All will be revealed in a few days’ time.