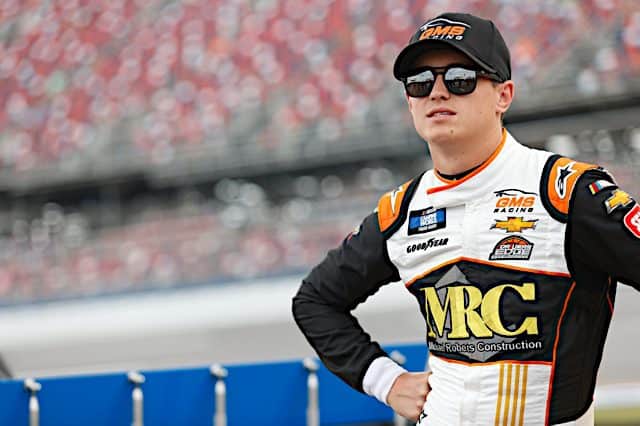 Zane Smith had the championship spot in his hands with 10 laps to go.

John Hunter Nemechek rallied from early contact that set him behind by two laps.

Neither driver was able to leave Phoenix Raceway Friday night (Nov. 5) with a championship on their resumes.

Smith was passed for the lead by Ben Rhodes for the title with eight laps to go, the result of partial contact in turns 1 and 2, but Smith knew Rhodes was coming with a full head of steam.

“We fired off good — honestly, probably too good,” Smith said. “And then I don’t know. It just got way, way too tight … tried everything from inside the truck with all the tools I had and just nothing would help. Just couldn’t really hold him off.”

The sting was obvious for Smith, who finished runner-up in the championship hunt for the second consecutive year. In 2020, Smith ran second behind GMS Racing teammate Sheldon Creed.

“I’m two for two for making this final four and two for two for finishing second and, I mean, just losing it,” Smith said. “So this one probably hurts more though, honestly. My truck last year never had any of the issues that we had tonight. And I mean, I was eight laps away from winning the championship and I just was so helpless. I could not get my truck to turn no matter what I did.”

The final result for Smith’s No. 21 Chevrolet was a fifth-place finish in the race, two spots behind eventual champion Rhodes.

Smith’s disappointment was palpable, in part because his future remains uncertain. On Thursday (Nov. 4), Smith confirmed he had a deal signed with Chip Ganassi Racing earlier this year to be a “backup plan, replacement” for one of the team’s Cup rides. Now he enters the offseason as a free agent who has no idea where he’ll land in 2022.

Zane Smith held the championship spot with 10 laps to go. He couldn’t hold off a late charge from Ben Rhodes to claim his first title. #NASCAR pic.twitter.com/qy2FCQTAaS

So what’s his mindset after a race like Friday’s?

“Shit, I don’t know,” Smith said. “For the past three months, I don’t know what I’ve got for next year. Seem to always kind of run into this problem every year, so I don’t know. I sure as hell know if I’d won though, it probably would’ve helped my situation.”

On the other side of the same disappointed coin sat Nemechek, dejected and disgusted after having his chances severely diminished on the first lap of the night.

Jack Wood crowded Nemechek entering turn 1 and Nemechek slid high into the wall, dropping him through the running order. That eventually led to contact off turn 2 with Kris Wright, flattening the left-front tire of Nemechek’s truck and forcing him to pit under green. The incident left Nemechek two laps down less than 10 laps into the race.

Four drivers race for it all tonight!

The No. 4 team somehow rebounded to finish seventh despite the truck’s mangled left side. In the final laps, Nemechek was actuallys closing on the other two Championship 4 contenders ahead of him in Rhodes and Smith.

But he ran out of time, ending the playoffs winless after victories in five of the first 13 races of 2021.

“I’ve gotten asked the question of, is this year a failure if we didn’t win the championship,” Nemechek said. “Now that I’m there, no, it wasn’t a failure. We had speed all year. We were one of the favorites every single week. So no, it doesn’t surprise me that we had one of the best trucks tonight. I feel like (Kyle Busch Motorsports) has been strong here. This is one of my best racetracks. (Crew chief) Eric Phillips has been really strong here.

“If you had asked me that question after practice, I probably would have said the opposite of that answer, but it doesn’t surprise me.”

Nemechek firmly believes if a caution fell within the final 30 laps, the championship would have been his. But in a year where Truck Series races have often been marred by numerous yellows, the late one he needed just never came.

“That was it. We had it,” Nemechek said. “I mean, out of the playoff trucks, I thought we were one of the fastest trucks there. I drove from the back, two laps down, to the top 10 pretty much every single run. We had track position. I thought we could have fought the [No.] 18 [of Chandler Smith] for the win there.

“I don’t know how good we were on the short side compared to others. I think like Zane was super fast on the short side. But if we would have had a five-lap run or 10-lap run, I think that we definitely could have gotten them.”

Instead, Nemechek will have to wait for 2022 to possibly hoist his first championship trophy. Smith, meanwhile, continues to search for whatever ride next comes his way.